How a stolen VIN nearly led to a scrapped Ford Mustang 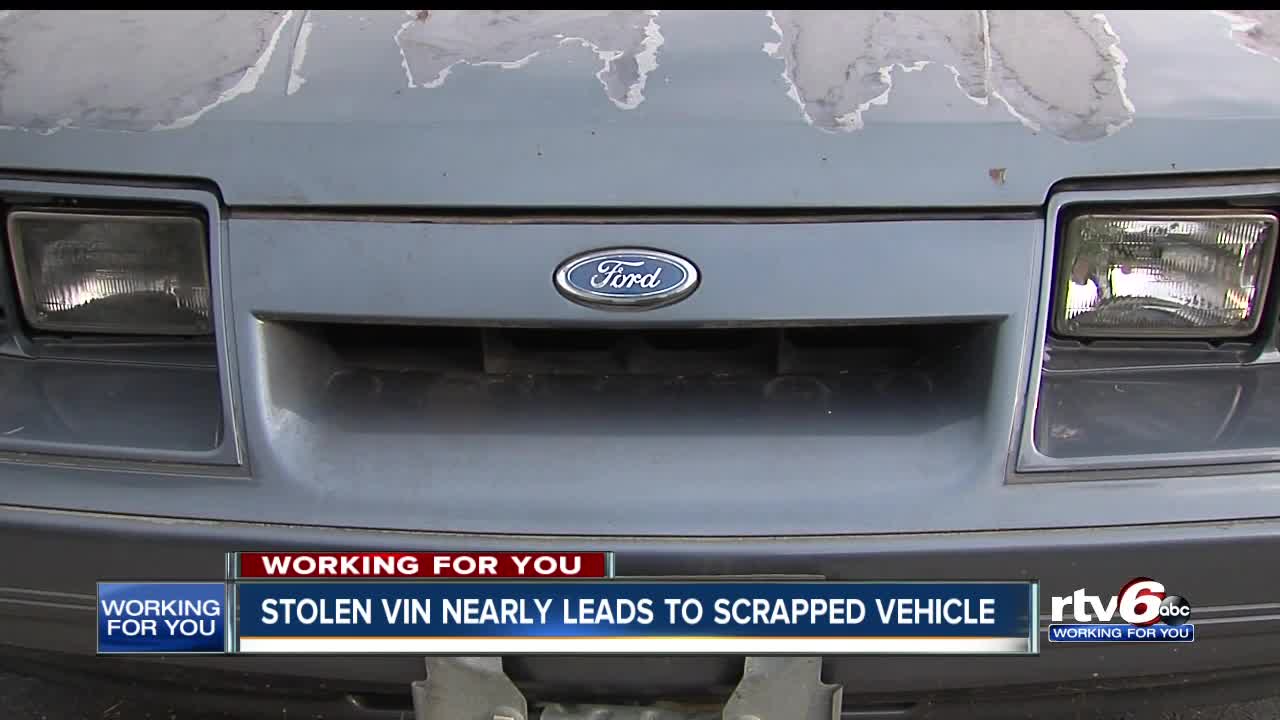 An Indianapolis woman almost lost her car after someone copied the car's VIN and tried to sell it as scrap.

INDIANAPOLIS — Here is a warning if you drive a car that is more than 15 years old: A woman in Decatur Township said her Ford Mustang was almost hauled away by a towing company after someone copied her vehicle identification number (VIN).

It's visible in several locations on your car, including on your front windshield. Shelby Edwards was shocked to learn that's pretty much all a crook needed to sell her car as scrap.

"The fact that it's that easy for someone to just claim a vehicle as theirs and sell it is absolutely crazy," Edwards said.

Shelby and Trent Edwards learned about a little-known Indiana law the hard way when one of her neighbors called her Sunday night.

"Hey, I don't know if you know or not, but your Mustang's being taken," Shelby said the neighbor told her. "Like, someone has it on a trailer."

They ran outside and saw the 1986 Mustang Shelby named "Clive" ready to be towed away. The driver said he had permission.

"He said they got contacted by the owner who had provided them with the address and VIN number of the vehicle," Shelby said.

Under Indiana law, a salvage automotive recycler can buy a car without a title if:

1. The vehicle is at least 15 model years old;
2. It's being sold for scrap purposes;
3. A record of the transaction is made.

The owner of Midtown Recycling said they followed the law by making copies of the woman's ID and taking a picture of her with the car.

"I was like, 'I have my title. I have my registration. I have my ID. I can prove to you this is my vehicle,'" Shelby said.

She said, at first, the driver wasn't listening and he told Shelby she would have to come pick it up at the tow yard Monday and sort it out.

The police were called and, eventually, the Mustang was taken off the tow truck. But Trent said the owner of the towing company had a startling message.

"He said he would have had it in parts by Wednesday," Trent said. "That's alarming."

The owner of Midtown Recycling said they are taking stronger measures when screening people who sell cars as scrap. Shelby wants the law changed to protect vehicle owners.

"I think it's a policy that just needs to be changed," she said.

Because she has generous plans for her car.

"My brother is moving into town next week, so we're giving it to him to be his first car, too," Shelby said.

IC 9-32-9-29 Purchase of vehicle for scrap metal or parts; records of purchase; penalty

(2) the purchase is solely for the purpose of dismantling or wrecking the vehicle for the recovery of scrap metal or the sale of parts; and

(3) the automotive salvage recycler records all purchase transactions of vehicles as required in subsection (b).

(1) The name and address of any scrap metal processor or automobile scrapyard.

(2) The name of the person entering the information.

(3) The date and time of the purchase transaction.

(4) A description of the vehicle that is the subject of the purchase transaction, including the make and model of the vehicle, if practicable.

(5) The vehicle identification number of the vehicle, to the extent practicable.

(6) The amount of consideration given for the vehicle.

(7) A written statement signed by the seller or the seller's agent certifying the following:

(A) The seller or the seller's agent has the lawful right to sell and dispose of the vehicle.

(B) The vehicle is not subject to a security interest or lien.

(C) The vehicle will not be titled again and will be dismantled or destroyed.

(8) The name, date of birth, and address of the person from whom the vehicle is being purchased.

(9) A photocopy or electronic scan of one (1) of the following valid and unexpired forms of identification issued to the seller or the seller's agent:

(C) A government issued document bearing an image of the seller or seller's agent, as applicable.

(10) The license plate number, make, model, and color of the vehicle that is used to deliver the purchased vehicle to the automotive salvage recycler.

(11) The signature of the person receiving consideration from the seller or the seller's agent.

(12) A photographic or videographic image, taken when the vehicle is purchased, of the following:

(A) A frontal view of the facial features of the seller or the seller's agent.

(B) The vehicle that is the subject of the purchase transaction.

(c) An automotive salvage recycler may not complete a purchase transaction without the information required under subsection (b)(9).