How much would it cost to ditch your car? Let's calculate. 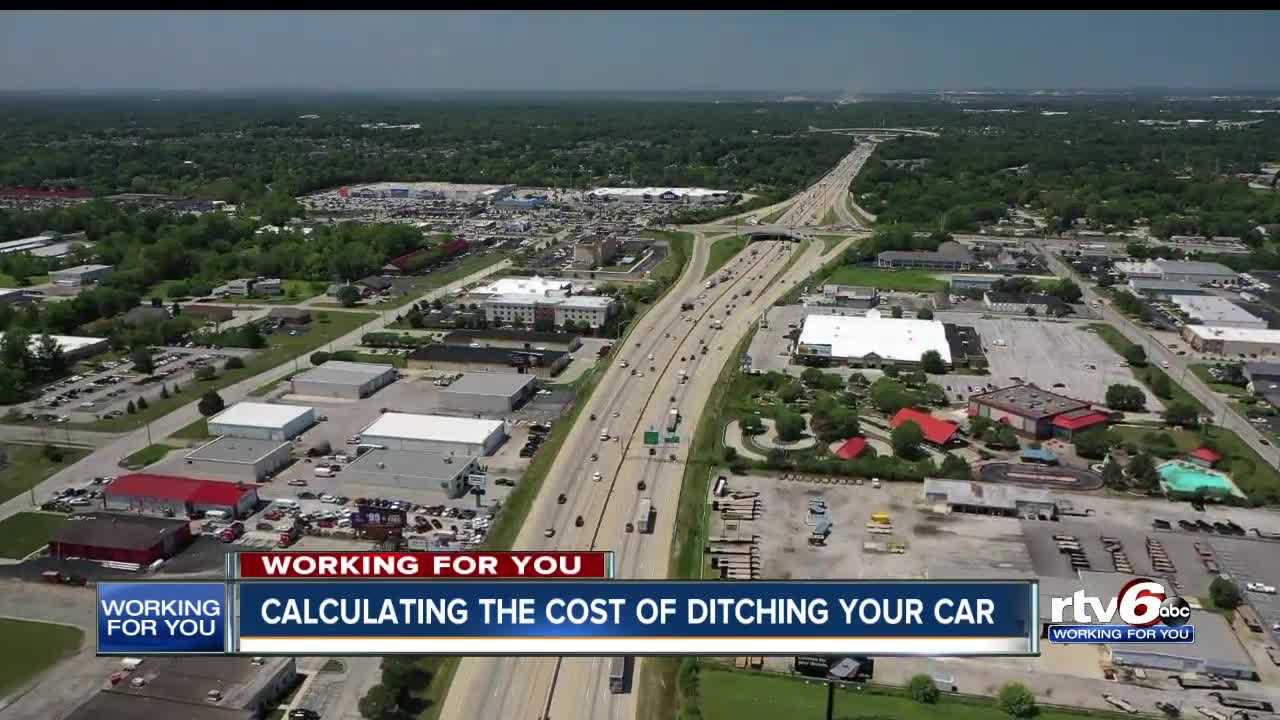 What does it mean to be car-free in Indianapolis? Could you ditch your vehicle and rely on public transportation and what would that mean for your wallet?

INDIANAPOLIS — In Indianapolis, mass transit is a top priority and on Virginia Avenue, commuters can easily get off a Red Line bus and jump into a Blue Indy car or a Pacers Bike Share. But which of these options are the fastest, the cheapest and the most expensive?

We crunched the numbers to find out how much it will cost you to ditch the car.

Getting across a city as large as Indianapolis can be tough without a car. And with the number of mass transit options increasing, commuters are trying new ways to get around, including the Red Line.

For me personally, we live at 57th and College so it's very convenient and I work downtown, so there's more convenience there, there's WiFi on the red line and it's nice to be able to sit and get some work done and not be frustrated in traffic," Sara Schluge said.

While the Red Line is gaining its fans, it's not Indy's only transit option, and it may not be an option depending on where you live. A trip from outside Marion County to Downtown Indianapolis is 13 miles.

Driving a medium-sized sedan and making five round trips a week could cost you about $79 with gas prices where they are right now. That number includes the cost of insurance, maintenance and everything that goes into owning a car.

Renting a Blue Indy car for the same commute would cost you $90 a week, and while that price doesn't seem too different up-front, commuters we interviewed are weighing both options.

"So I would pay for the car because I can go anywhere I want or I would go with the Blue Indy because it's not much more expensive, but no insurance payments and all that," Kristi Lott said.

If convenience is what you're looking for, then you might catch a ride on Uber or Lyft. That same commute, five days a week, would cost you $200 from both ride shares.

The cheapest option is using one of the city's many bike lanes to get from Point A to Point B. Using your own bike is free once you buy it, of course. But riding a bike for 13 miles creates a 90-minute commute in each direction, a pace that might be OK with those who use the Pacers Bike Share. Its total cost for the same week would be about $27.

IndyGo spokesperson Lauren Day said finding mobility for commuters in the so-called last mile of their journey is the next step in giving everyone options.

"Increasing those mobility options, looking at where do you place bike shares, carshares for instance but also where are we investing in the transit service. We're looking at the densities in population, employment, places for education, access to healthcare, access to fresh food," Day said.

To calculate the price of your commute, click here or here.