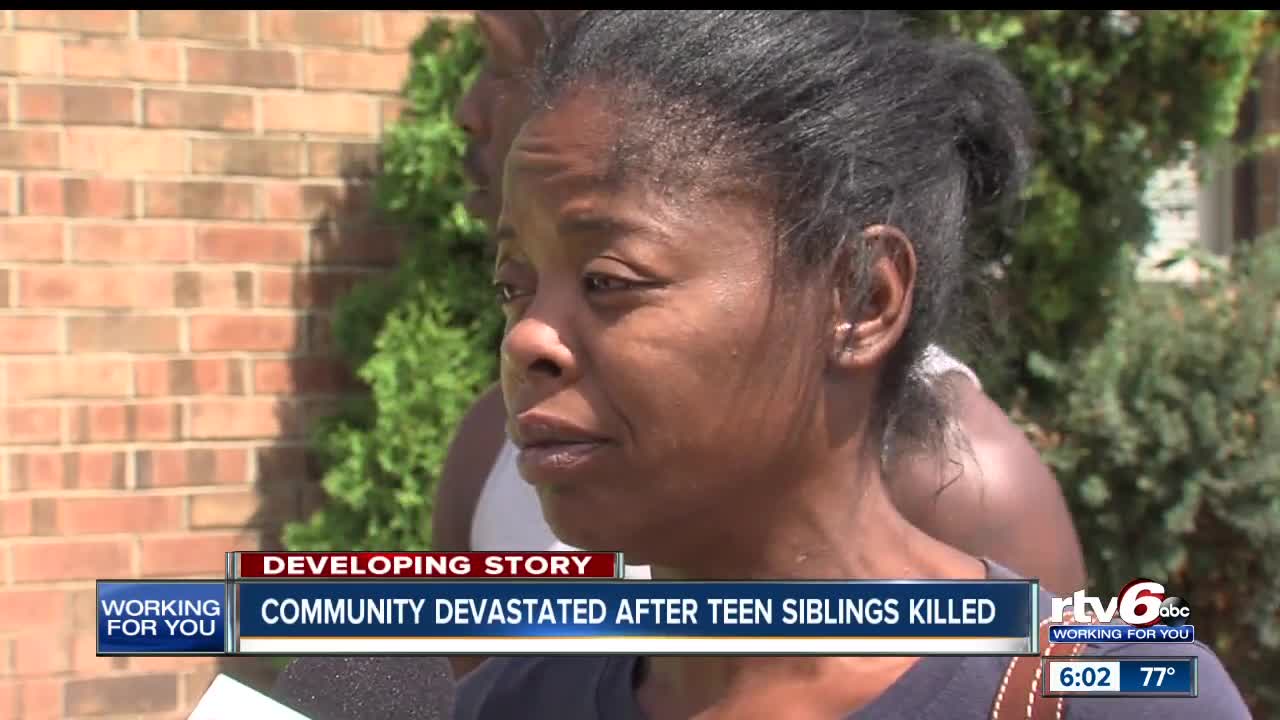 INDIANAPOLIS — Family members and anti-violence leaders are calling on the entire Indianapolis community to come together to fight the violence after teenage siblings were shot and killed on Friday morning.

The mother of Nicholas, 16, and Ashlynn, 15, Nelson told RTV6 her children were great kids that kept to themselves and were excellent students. She was far too upset to speak on camera, but RTV6 did hear from Shawn Brown, the aunt of Nicholas and Ashlynn.

"It hurts so bad, these are kids that are good children they don't bother anybody," Brown said. "They go to school, come home — I'm hurt. I'm hurt."

The teens' mother says Nicholas was a smart kid and had a 4.6 GPA who was hoping to attend Purdue University after high school. She remembers her daughter Ashlynn as a quiet young lady who kept to herself but was also very sweet.

"Most of these are by kids," Ron Gee, founder of 'Cease Fire Indy,' said of the names on a poster. "The same age of the kids that lost their life just this morning are written by kids."

Gee listed off the names on a poster that was written at a recent event. The names are people lost to violence.

"Everyone is losing someone to gun violence," Gee said. "It's up to us to try to stop it. If you see a person that has it, gone and tell them now, 'bro, don't do that.' We all need to speak positive, if you really care for your loved ones, or your homie, or your bro, tell them not to win with that. We ain't with that.

Gee was also shot on Christmas Eve last year but is still out spreading the message about stopping the violence, the killings and putting the guns down.

"Where are they getting these guns from? What are we going to do to stop this?" Gee said. "It takes more people putting in effort — even if you don't live in this community try to put in the effort to help us out because we are pleading out for help."

"I can't sit in this community and let stuff like this happen. These kids that got killed this morning is a sad situation," Robert Hearst, A&I Variety Meats and Produce owner, said. "Sometimes, we have to put ourselves in that parent's position. What if it's my child? Your child? We all have to step up now it's not going to take one person to do it, it's going to take everybody."

These local leaders say they are tired of seeing mothers crying every day, experiencing pain that never leaves.

They are tired of seeing lives taken too soon.

Indianapolis City-County Councilor La Keisha Jackson released the following statement in response to the shooting death of Nicholas and Ashlynn:

“It is hard to find words to express the heartbreak all of us feel at the unnecessary violence plaguing the youth in our community, and for the unimaginable loss Nicholas and Ashlynn’s mother and family have been dealt. I call on the entire Indianapolis community to unite behind her and the entire Nelson family, as we all grieve the senseless loss of these two beautiful children. May God bless them all.
The city and the Far Eastside community have been working hard to reduce gun violence and violent crime in our neighborhoods. Today’s events will only make us work harder to bring our community together in peace.”

Officers arrived just before 7:30 a.m. and saw a possible suspect running from the scene. Members of the SWAT team and police dogs were called out to search.

Cook says it's possible there are people at the apartment complex who have information that could help detectives in their investigation. She's asking those people to come forward. Additionally, tips can be called in at: 317-262-TIPS.