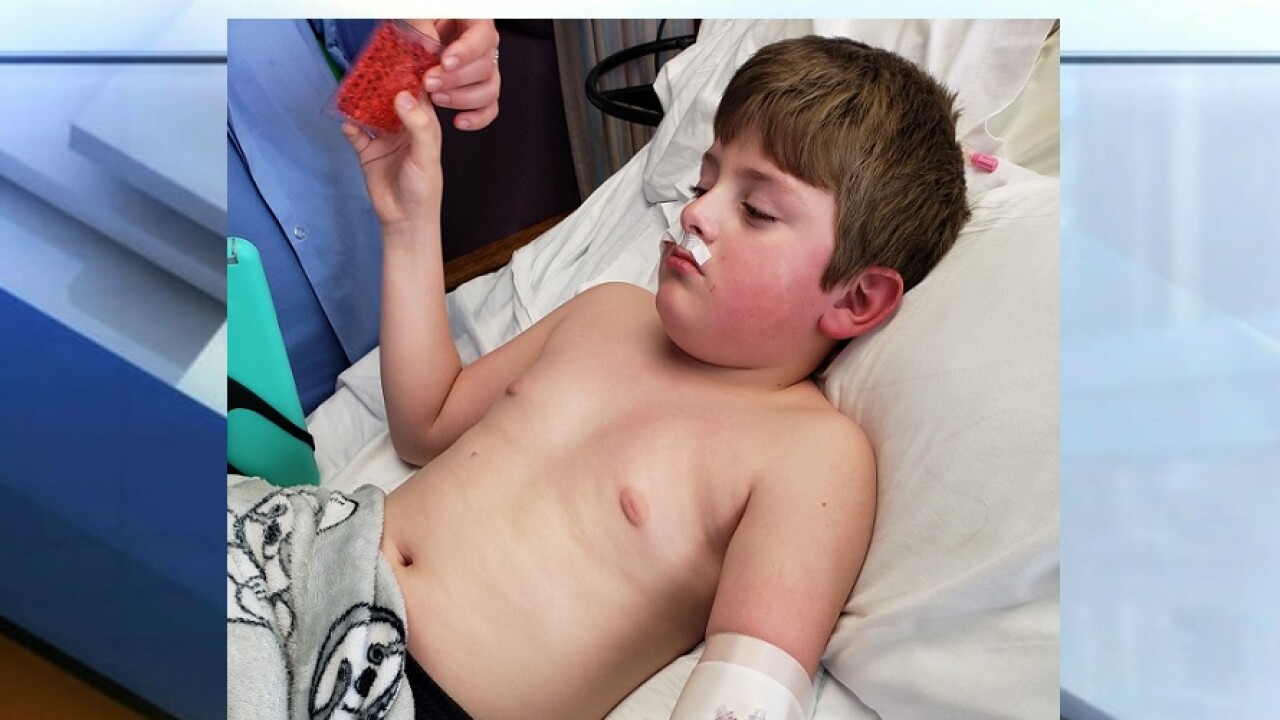 INDIANAPOLIS — A message from a Hoosier mom to other parents — talk to your kids about the dangers of swallowing different things, especially when they come with a warning label.

A Washington mother, Dani Fetherman, took an unexpected trip to the emergency room with her 8-year-old son, after he swallowed “Buckyball” magnets.

Last week, Ian Fetherman was playing with these magnetic balls.

“Suddenly they were in the back of his throat and he realized that if he didn't swallow them he was going to choke on them,” Dani Fetherman said.

Zen Magnets have been back on store shelves for a few years, following a ban by the Consumer Product Safety Commission. The packaging includes warnings inside and out, about the dangers of swallowing them.

“Not even a week ago, I had just gotten onto him about putting things in our mouth and he just didn't quite listen,” Fetherman said. “He's just a kid though, it was purely an accident.”

According to the zenmaagnets.com website, their products are small rare earth super-magnets that are 30 times more powerful than the average fridge magnet.

Ian is not the first patient to come to Ascension St. Vincent in Indianapolis with magnets in his stomach.

“Over the last couple years, we have seen about five children who have presented with magnet ingestion and what they are eating are these little BB sized magnetics,” Dr. Evan Kokoska, a pediatric surgeon at Ascension St. Vincent, Peyton Manning Children’s Hospital, said. “They have a lot of different names, Buckyballs, rare earth are the two I have heard most common.”

Luckily for Ian, Dr. Kokoska says the 8-year-old ate all seven balls at the same time so the magnets were easier to remove. Although, it still is not the most simple process.

“If they sit in the same location there they can also ulcerate,” Dr. Kokoska said. “I think one mechanism, they are so strong they are probably drawn to metal on the outside, metal on the clothes and that kind of thing especially a metal belt buckle. I was able to go in with a laparoscope and it is pretty amazing but I got the instrument even near where I thought they were and they stuck to the instrument. These can be much, much worse. If they burrow a hole in the intestine as you can imagine and then you have perforation and spillage then folks can get much sicker.”

Ian is now back at home in Washington recovering. His mom, Dani, is thankful for the doctor’s quick action to take care of her son. She wants all parents to know how much of a dangerous impact these little toys can have.

“It's not just magnets, they are sold online under a hundred different names and a hundred different brands,” Fetherman said. “And just talk to your children about the importance of not being scared to tell you if they accidentally swallowed something. Because it can cause some serious damage.”

“Zen Magnets” is one of several companies that sell these magnetic balls. In an email, the company’s founder points out the numerous warning labels on their packaging.

The outermost warning says:
"WARNING:
Magnet Poisoning Hazard. These magnets are not toys for children. Swallowed magnets can stick together across intestines causing serious injury or death. Keep away from kids who do not understand the dangers of magnets."

The company’s founder, Shihan Qu, also added: “There are multiple layers of warnings inside, including one that must be acknowledged and removed before access. You can see them here: https://www.youtube.com/watch?v=Xth5B2SmIzI&t=60s [youtube.com] Also, there is already a pre-existing ban on high powered magnet sets sold as toys, via the toy safety law (ASTM-F963). Unfortunately, the consumer product safety commission didn't do much enforcement, especially 2016-2019. We're the leaders of magnet safety, but most of the magnets being sold on the market don't take safety as seriously as us, unfortunately.”