Muncie apartment residents endure and stick together during power outage 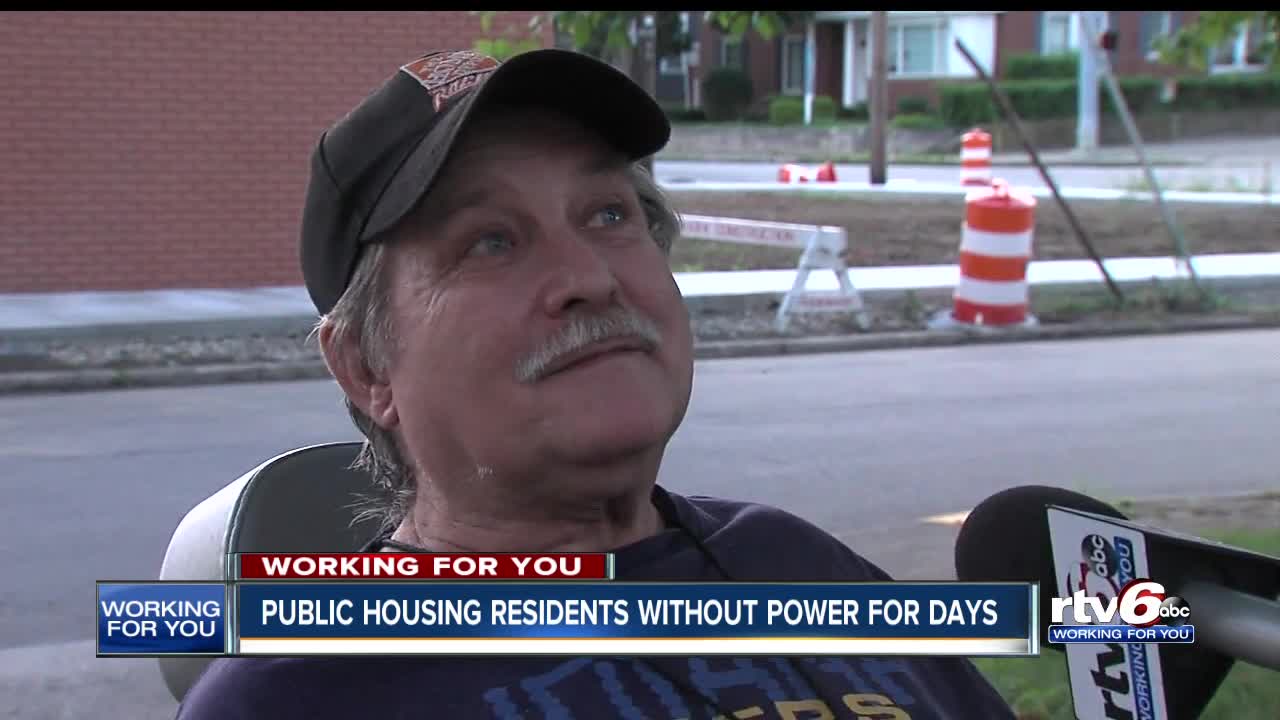 Residents of a Muncie public housing building have been without power and air conditioning since July 5.

MUNCIE — The dropping temperatures are a huge relief for some residents of a Muncie public housing complex who haven't had electricity or air conditioning since July 5, and with some luck, they'll have both restored soon.

Joseph Anderson, CEO of the Muncie Housing Authority, said contractors will be working around the clock in 12 hour shifts starting at 8 a.m. Tuesday to repair the electrical issues. The housing authority hopes to have power restored in three-to-five days. He also said officials are looking into hotels in case they have to move residents out during repairs.

Sidney Electric is working to build a panel which will restore full power to the second through seventh floors, Anderson said. Crews originally were going to send parts back to Detroit for repair, but decided to build the panel instead with the goal of restoring power sooner.

Despite the chance to go elsewhere while repairs are made, residents said they wanted to stay together and that they appreciate the efforts of employees who to help them through this crisis during the hottest weekend of the year.

"I still have no air. The whole building doesn't have air," John Stankowitz said. "Right now, I'm running a cord out to the hallway, which that's powered by a generator."

The U.S. Department of Housing and Urban Development said parts of the building's electrical system had to be sent to Detroit for repair.

"We had the 95-97 day, no air, and I kept my windows closed because I know if you keep your windows closed that hot air doesn't come in," Stankowitz said.

As of Sunday, 30-to-36 units were still with partial power.

"The highest it got in my apartment was 82," Stankowitz said. "That's hot, but I used to live in Florida, so no big thing."

Fire and police officials declared the building safe for people who live in during the heat wave, Anderson said. Muncie police officers and apartment staff members are continuing to check on residents while the repairs are underway.

The Muncie Fire Department has also inspected the extension cords being run in the hallways and into apartments, Anderson said. Apartment staff members have purchased more extension cords and fans for residents since the power outage.

"We all pulled together and Muncie Housing Authority has been good," Stankowitz said. "They've been feeding us."

The Red Cross is providing cots in a downstairs cooling location for residents. Diane Moffit said employees have been doing everything they can to help.

"The workers, they have been here around the clock," Moffit said. "These people came here yesterday and they didn't leave until midnight, so whatever we've been suffering with, they're making sure everybody eat. Everybody got enough to drink."

And folks living here have been offered a new place to stay, but so far no one has accepted that offer.

"Nobody wanted to leave. Everybody is bonding together," Moffit said. "People been through worse than a small blackout. We're not hungry, we can still shower, there's lights on in the daytime."

The Muncie Indiana Transit System is still on stand by to help transport any residents if needed, Anderson said.

Those who want to help the residents can contact Katina Strauch with Muncie Housing Authority at 765-288-9242 extension 212.