PROGRAMMING ALERT: General Hospital to re-air on RTV6
NewsWorking For You 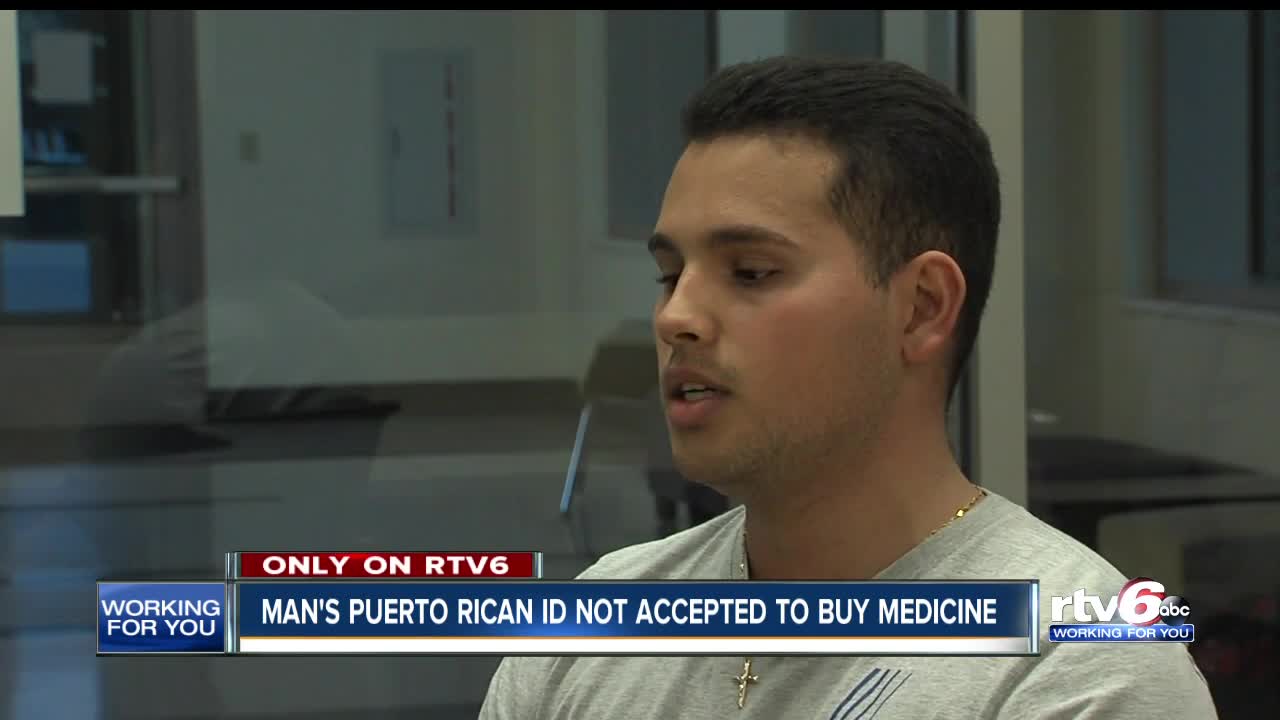 A third-year engineering student at Purdue, who is from Puerto Rico, went to CVS to buy cold medicine. However, the clerk would not accept his Puerto Rican drivers license, a U.S.-issued ID, or his passport.

WEST LAFAYETTE — A change in the weather brought on the symptoms of a cold for Jose Guzman Payano.

Payano, a third-year engineering student at Purdue University and United States citizen from Puerto Rico, grabbed what he needed and went to pay at a self-service checkout.

"I was feeling a little sick. I had a very bad sore throat," Payano said. "I thought normal over-the-counter medicine would take care of it, so I went to CVS. I scanned all my items, then I scanned my Mucinex bottle."

He was asked to show ID to buy the cold medicine, which Payano had no problem with.

"My ID is a Puerto Rican drivers license, and it is a Real ID, too," he said.

He handed it to the clerk.

"She looks at it and then she faces and looks at me again and asks for a U.S.-issued license," Payano said.

Payano said his ID has been questioned before, even when traveling at airports in the U.S.

"A Puerto Rican license is a U.S.-issued license," he said. "Puerto Rico is a part of the United States. It's a United States territory."

Payano said he carries his passport because of how often this happens, but he said the clerk wouldn't accept that either. She continued saying he needed a U.S.-issued license or a visa for an ID.

"I proceeded to leave the CVS store with tears in my eyes," he said.

Payano filed a complaint with CVS and said he was told someone would call him. That never happened, and now he worries about his fellow Purdue students, many of whom are from other countries.

After eight days of not nearing from anyone with CVS, a company spokeswoman issued a statement Saturday after RTV6 reached out.

“We are committed to ensuring that every customer receives courteous, outstanding service in our stores and we apologize to the customer for his recent experience. We are fully investigating this matter to learn more about what occurred and we are seeking to speak with the customer directly," the statement read. "While our employees must adhere to laws and regulation requiring identification for the purchase of certain over-the-counter medication, we do consider Puerto Rican driver’s licenses to be valid identification.”

The spokeswoman said CVS is retraining the employee of the store about what IDs are acceptable.

However, Payano said what happened to him speaks to larger issues that Puerto Ricans face every day.

"I feel like we're always being treated as second-class citizens, especially when Puerto Ricans have to provide their licenses," he said.