Resilient Pendleton pulls together and moves forward with June Jamboree 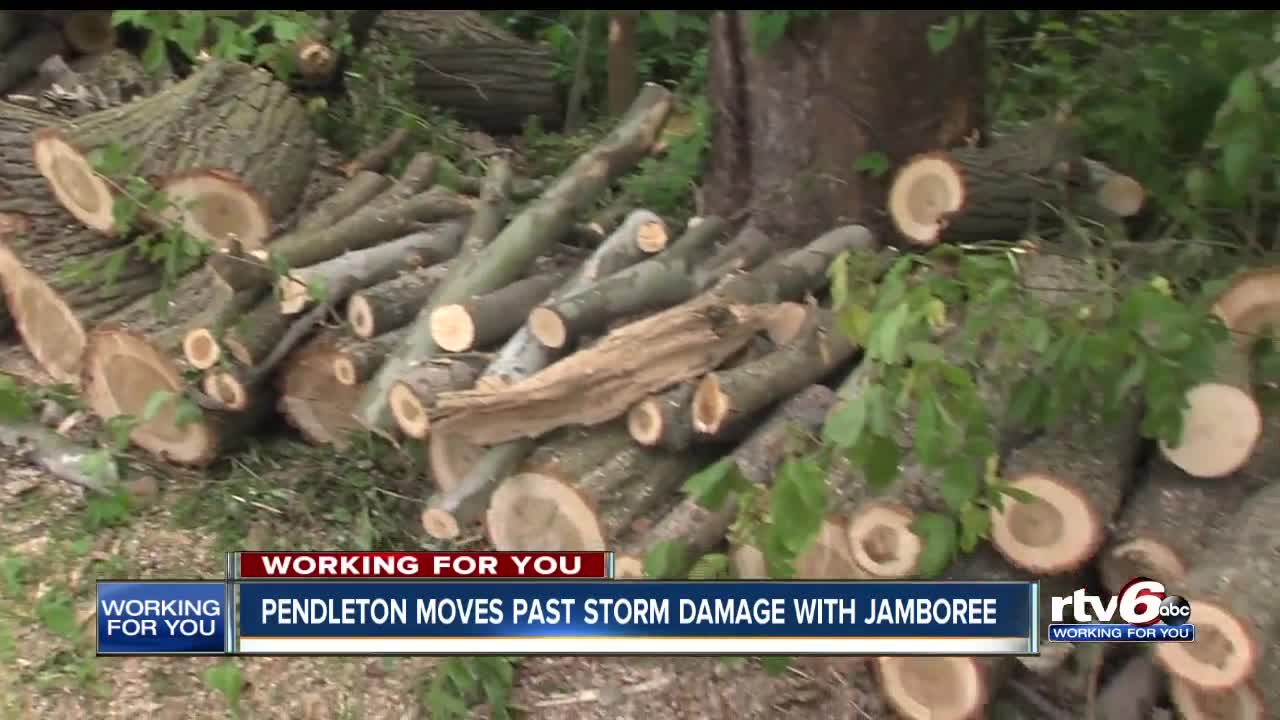 The Pendleton community is coming together after last week's tornado.

PENDLETON — The cleanup continues in Pendleton after the city and other parts of Madison County were hit by a tornado. Neighbors in the community aren't letting a natural disaster ruin one of the most important summer events in the area.

Folks in Pendleton are sending a clear message — they are moving forward and they're going to do it together starting Tuesday night at the June Jamboree that goes on despite sobering reminders that are everywhere.

Debris litters the ground and across the street from the festivities are trees snapped in half by the EF2 tornado that swept through just over a week ago on Memorial Day.

But the community is whole.

Just a few blocks from the fairgrounds that host the June Jamboree, Steve Barkdull hasn't yet had time to rest.

"My friends and neighbors and family has done all the work on my property," Barkdull said.

"Just helping a good friend of ours clean up from the mess," Lawyer said.

Because it's what they do.

"Pendleton's always been that way," Lawyer said. "We all come together in times of need."

Barkdull said he was home with his wife when the tornado hit.

"All of a sudden, it got really, really dark and the wind picked up," he said. "In a minute, it was all over with. Come outside and look at all the damage. There was a lot of damage."

That tornado left a lot of work behind for the folks who live in Pendleton, but it was time for a well-earned break Tuesday night.

"I think it's a good thing for the town of Pendleton to kind of reunite again and get this off their back again," Barkdull said. "I'll go down and have a K burger, but I don't ride any rides."

But some do, as smiles return to faces for the first time in a while.

"Some people get caught up in the event right away and the adrenaline is running," Don Billey, a pastor and chaplain, said. "Three, four, five days later, everything lets down and the emotions just take over."

Billey works with community organizations active in disaster aid. He helps council people through the stressful event of a natural disaster.

"This is normal," Billey said. "This is something that says life is going to go on, and that's so significant in the lives of the people that have been impacted."

People can also sign up to report damage. That information will go to a long-term recovery group that city and county officials started the work of forming Tuesday morning. The group's primary goal will be to help people affected by the tornado that were uninsured or under-insured when it hit.

City and county officials will meet again Friday to discuss the next steps in creating the long-term recovery group.

"It just goes to show you the strength of Pendleton," Lawyer said. "Nothing's gonna get us down and we're gonna persevere and get through anything."