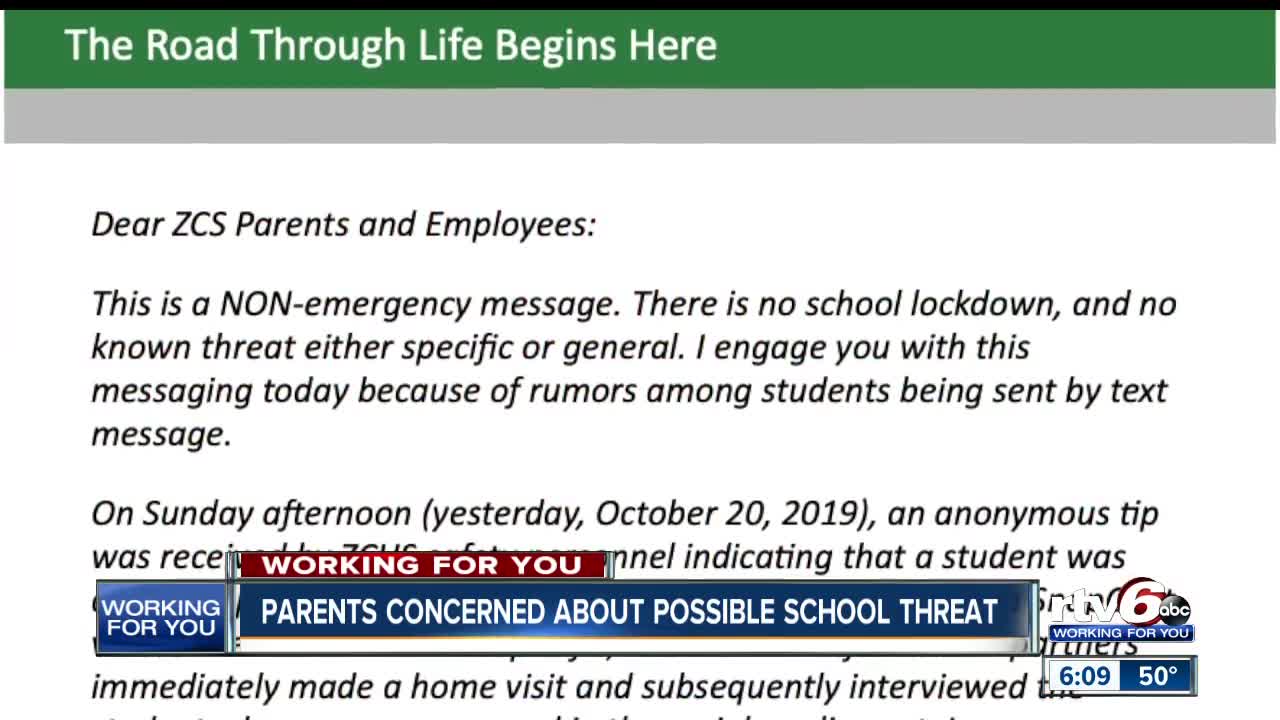 A mother in Zionsville says she has concerns about how her son's school handled a potential threat.

ZIONSVILLE — A mother in Zionsville says she has concerns about how her son's school handled a potential threat.

On Oct. 21, rumors began circulating about a student possibly making threats and posting on social media with some type of gun.

Weidner says she didn't hear anything from the school district about the potential threats until 11:30 a.m. Monday morning.

Some parents RTV6 spoke to said the lack of information was the scariest part. They wish the school would have notified them before the school day started.

The alert said there was a non-specific threat made on social media and the person who posted it was not at school.

You can read the alert sent by the school below:

This is a NON-emergency message. There is no school lockdown, and no known threat either specific or general. I engage you with this messaging today because of rumors among students being sent by text message.

On Sunday afternoon (yesterday, October 20, 2019), an anonymous tip was received by ZCHS safety personnel indicating that a student was allegedly playing with a BB gun that looks like a handgun in a SnapChat video. The threat was non-specific, but our law enforcement partners immediately made a home visit and subsequently interviewed the student whose name appeared in the social media post. Law enforcement determined that there was no specific or immediate threat. The student has been separated from school while the investigation continues.

School officials were notified after school started this morning of a text strand between two ZCHS students indicating that the student referenced above is at school and is armed. This is false and potentially disruptive of the school environment today, hence this message to all of you. REPEAT: There is NO school lockdown and no specific or general threat in this regard. The student referenced above is not at school.

The social media post from Sunday remains a matter of interest to law enforcement and has been passed along to the county prosecutor. We greatly appreciate our law enforcement partners for their speedy and thorough work on matters of safety for our schools. We also applaud the anonymous tipster who alerted school officials to this matter.

In closing, I repeat, there is NO emergency and NO LOCKDOWN at ZCHS this morning.

"It was just really sad," Weidner said. "It was belittling a lot of the fears a lot of us had because we had known about it for 12 hours before the email came out."

Scott Robinson, superintendent of Zionsville Community Schools, says alerts are sent when there is a direct or imminent threat to student or staff safety and in this case, there wasn't. The alert was eventually sent to clear up rumors.

The school can't discuss any possible disciplinary action taken against the student because of privacy laws.

Police are investigating the incident and have forwarded information to the prosecutor's office.