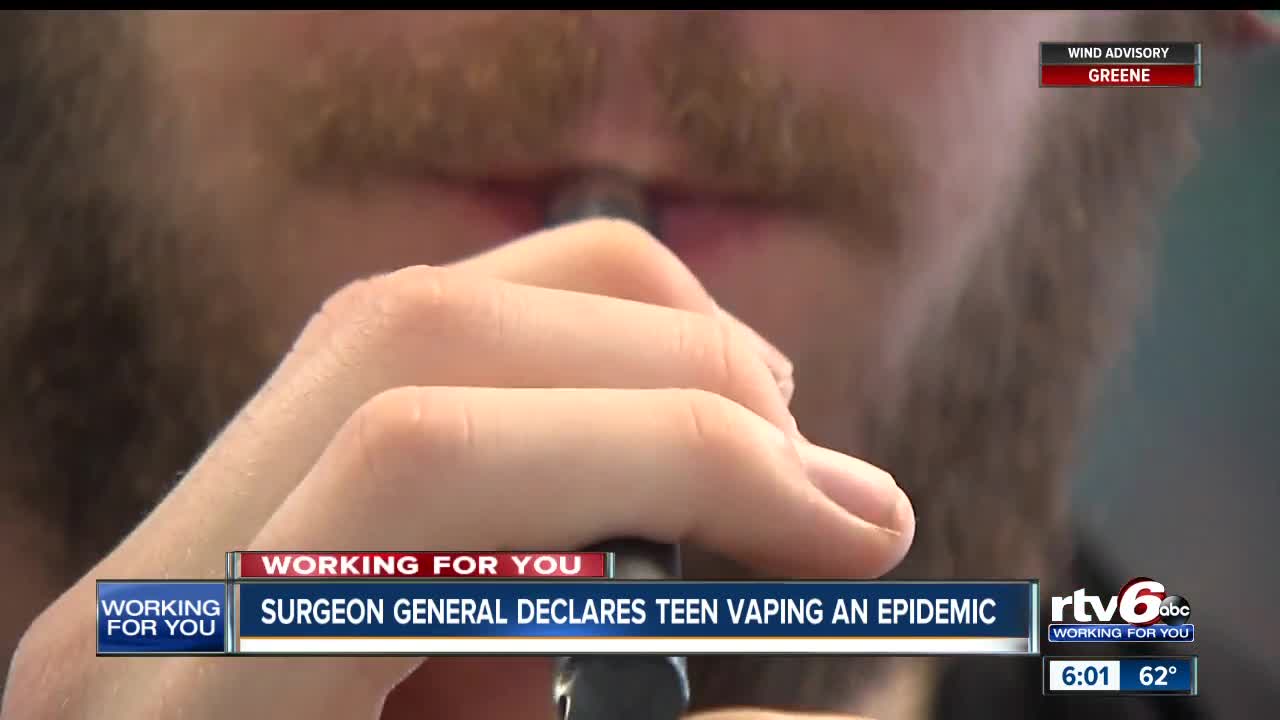 INDIANAPOLIS — The U.S. Surgeon General has declared vaping a national epidemic among teens, and Indiana schools are experiencing that firsthand.

"It went from one or two tickets a year to 26 in a year, and this year is not even over," Officer Shane VaNatter said.

Exciting flavors like "rock candy mystic" and "space jam brand" appeals well to teens, according to VaNatter. The officer says these products are telling teens that vaping is "sexy" and "it makes you more popular; it can help you relax."

"It becomes a thing of who can make the biggest smoke ring? Who can hold it in the longest?" VaNatter explained. "It becomes a bit of the game, and there's all kinds of challenges on Snapchat and online."

The e-cigarette trend has skyrocketed among teens, especially once the Juul was introduced.

A juul is a battery-powered device, used for inhaling a flavored aerosol that usually contains nicotine.

"Each little pod contains an entire pack of cigarettes worth of nicotine," VaNatter said. "That is equivalent of 200 puffs of cigarette smoke."

Which means people are becoming addicted faster. "We have kids that have to Juul because they're physically addicted to the nicotine," VaNatter said.

According to the FDA, vaping among high school students has increased by 78% in one school year.

Carmel Clay Schools is well aware of the epidemic and has introduced a new program called, "Catch My Breath" to educate students on the dangers of vaping.

Both junior high and high school students will now take four mandatory courses during their health classes that are dedicated to learning what e-cigarette products look like, the toxic chemicals inside them, and practice refusal skills.

"In all of these products, there's chromium, there's nickel, there's lead," VaNatter said. "They are also inhaling hot scolding water vapor into your lungs which can create an effect called popcorn long, which actually burns the inside of your lungs and can cause irreparable damage."

"I think they are absolutely influenced by messages that tell them that it's better than cigarettes, it's not bad for them, it's just water vapor," Ramona Rice, supervisor of learning, said. "They don't have good information, and so when we get that into their hands, they are able to make better choices."

If a student gets a citation for vaping in school, the repercussions don't stop there. The school resource officer hands that over to law enforcement, students receive a court date and have to appear in court with a parent.

“We are committed to preventing youth access of JUUL products, and no young person or non-nicotine user should ever try JUUL. We cannot fulfill our mission to provide the world’s one billion adult smokers with a true alternative to combustible cigarettes if youth use continues unabated. That is why we have taken the most dramatic and aggressive steps of any other manufacturer in the industry to prevent underage use with the JUUL Labs Action Plan [newsroom.juul.com].

“We suspended the distribution of certain flavored JUULpods to traditional retail stores as of November 17, 2018, strengthened the age verification of our industry leading e-commerce site, exited our U.S. Facebook and Instagram accounts, and are developing new technology to further limit youth access and use.

"In addition, we strongly support raising the minimum purchase age for cigarettes, tobacco and vaping products to 21 in Indiana. We look forward to working with lawmakers at the federal, state and local levels to achieve this end."