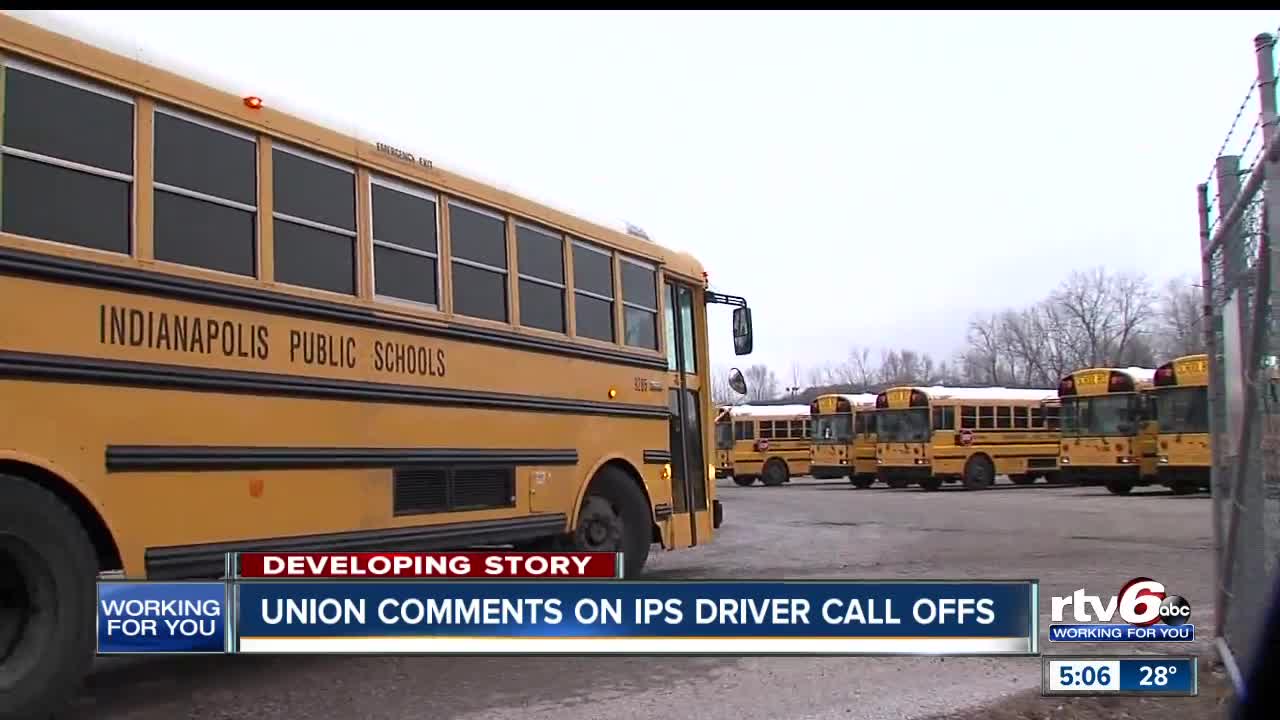 INDIANAPOLIS — The impact of Friday's school bus cancellation was felt across the city after nearly 100 drivers and monitors called off work.

Many students waited on rides that weren't coming, and others had to skip the school day altogether after the employees called in sick. Nearly 18,000 students, more than half the district, missed school. Indianapolis Public Schools reported 22,000 students rely on the school bus to get to school.

IPS superintendent Aleesia Johnson condemned the actions of the bus drivers who she called "rogue employees." She said their decision to call in sick was a direct response to the district's decision to outsource transportation operations to bus company First Student for the 2020-21 school year.

"Our drivers are going to have to transfer their employment forms to that new transportation partner, if they desire, and that is hard. We don't deny that. Transition is always hard, but I believe the source of some of this is the frustration they are feeling from this," Johnson said.

Johnson said IPS will investigate the individual sick calls to verify the employee was ill. Those who cannot verify could face disciplinary action.

However, Dave Robertson, the union representative for IPS and Durham Transportation staffers, said the union has continuously asked drivers to report to work while conversations continue with the district and First Student.

Robertson said he understands the impact Friday's call-offs had on families of students, but he reminded those same families and IPS to consider the position bus drivers are in. He said many are trying to plan for the future after IPS' decision to outsource all transportation employees and make them reapply for their jobs under a new private company.

"You know, every kid that's not picked up is possibly missing a meal, and in some cases, left at home by themselves," Robertson said. "We absolutely do not support kids not being picked up. You know, but there is a flip side. And I think the flip side from the bus drivers is that they're frustrated, they're confused, they're a little bit hurt. They also got worries. Most of the bus drivers are single parents. So I can see that frustration level has hit a high."

Johnson, however, said the frustration of bus drivers should not be a reason for students to have to miss school.

"We don't solve problems by putting our students in the middle and asking them absorb our concerns and our discontent," Johnson said. "To know that you would have that level of negative impact to go against the leadership of the group that represents you is nothing short of rogue behavior."

The call-offs affected parents of schoolchildren across the city. Shawanda Teyson spent her morning driving around the neighborhood picking up kids from their bus stops.

"They still need their education," she said as she drove children to school. "It's important."

By the time she arrived, many students had been waiting more than an hour.

"We have parents who may have left for work and left their kids at home thinking they are getting on the bus, and they are not," Teyson said.

IPS sent notifications to parents just after 6 a.m. that bus service was canceled, but Coco Martin had a heads up a little sooner after her son's bus driver slipped her a note Thursday.

"I think he might have been trying to give me a hint," Martin said. "He was just like, 'Here, I want to give you this in case there is any concerns or questions or cancellations.'"

Martin drove her son to school, but not everyone had that option.

"I don't want my kids to stand out just because I can't drive," Ariel Moore said.

Moore is housebound after having surgery, and her daughter, who requires specialized education, had to miss school Friday.

"And I feel really empathetically for families who now have to choose between going to work or just saying, 'I'm sorry. Until they figure this out, your friends get to go to school and you don't,' and that's not fair," Moore said.

Moore's daughter, a first grader, has an individualized education plan.

"It has all these stipulations for her for school, and one of them is transportation," she said.

Moore said she is within her rights to file a complaint about the lack of transportation for her daughter to get to school Friday. However, she's going to let it go for now and hope the bus issues get resolved.

Some parents, however, supported the bus drivers' decision to call off work.

"Kudos, I commend you because I don't feel like that was right," Lakeisha Green said. "Some of them have been driving 20-plus years, but now they have to reapply for another position at another company. That's not right. I don't blame the bus drivers. I would go on strike, too."

Johnson, the IPS superintendent, said the end result of the call-off was that thousands of children were put at risk and not only missed a day of school, but meals as well, as hundreds of students missed school-provided breakfasts. IPS also partners with Gleaners Food Bank to provide "backsacks" on Fridays, which contain prepared food for students to eat over the weekend.

"They deserve to have their instruction today as they normally would," Johnson said. "Our teachers and staff are at school today ready to serve and teach."