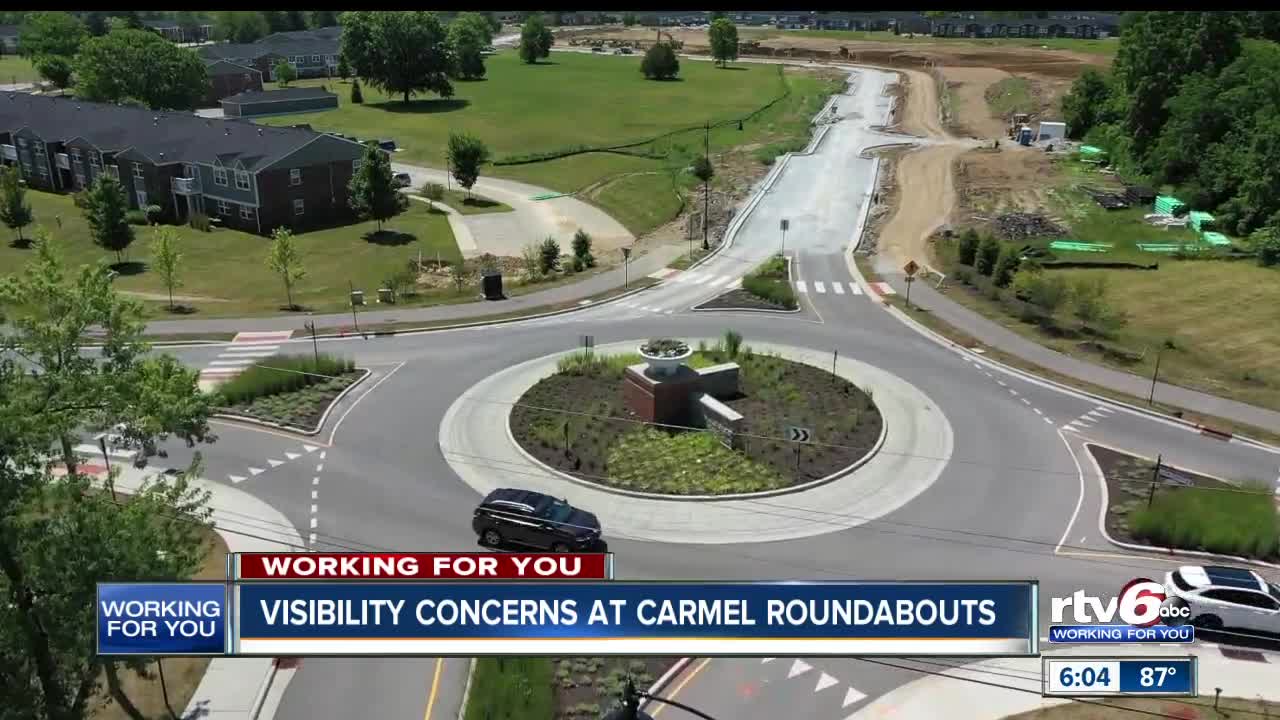 CARMEL — Drivers in Carmel are concerned about a lack of visibility at several of the 126 roundabouts throughout the city. Navigating them can be confusing, and some drivers say tall plants make pulling out dangerous.

"I'm supposed to look directly left, the tall grass — there especially — in a sub-compact vehicle completely obstructs whether I can see a car or not," Denise Moe said while driving around a roundabout (watch in the video above).

Moe lives in Carmel, and she appreciates the fact that roundabouts keep traffic flowing through the city; however, she's concerned about tall plants near some that make it tough and even scary to pull out.

"I'm only five foot one, and I drive a subcompact car, so I literally cannot see over the tall grass," Moe said. "So I can not at all see to my direct left."

"For seasoned drivers it might not be a big issue, but for young adults who are learning to adapt to drive — like my son, who is my primary concern — I think it's more of a hazard at that stage when they are learning to drive," Shazia Afzal, a Carmel driver, said.

Other drivers, like Matt Milam, says some drivers don't know how to use roundabouts and blocking the view only adds to the confusion.

"If they can't see the cars around them this can make it even more difficult for them to maneuver the roundabout," Milam said.

The City of Carmel says city engineers design the landscaping for all roundabouts and check the line of sight frequently.

They say the structure and landscaping in the middle of the roundabout, and on the median, is meant to keep the focus of the drivers to the left when they get to the roundabout.

It naturally forces drivers to slow down, but drivers say some of the roundabouts need work.

Carmel's spokesman says if drivers drive up to the roundabout with the nose of their vehicle at the yield line, there should not be any line of site issues. If there are, the city will work to correct them with different plants.

"When our City Engineers design the landscaping for roundabouts, they check them with site lines at the roundabout to account for the needed line of sight.

We did see some comments from people that suggested they thought the idea of roundabouts was to move traffic more efficiently but they were having to slow down to much.

While it is true that our goal is to move traffic safely and efficiently, this also includes slowing speeds down as motorists approach a roundabout and are inside a roundabout. If you drive up to the roundabout with the nose of your vehicle at the yield line there should not be any line of site issues. If there are then we can work on correcting them with different plants.

But the point of landscaping and structures in the middle of a roundabout, in addition to the medians during your approach to the roundabout, are indeed meant to keep the focus of the drivers to the left when they get to the roundabout. This naturally forces you to slow down, which is indeed the point.

As with all landscape grasses, they get cut every year as part of their care and maintenance."