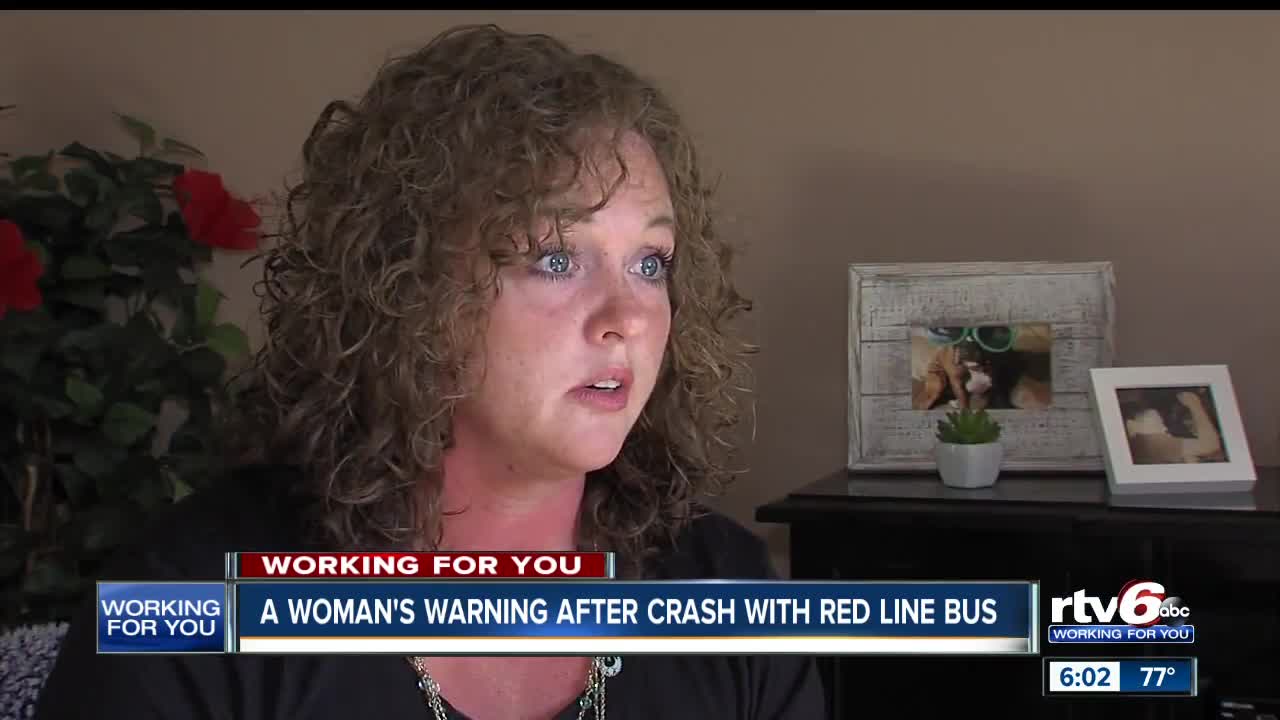 INDIANAPOLIS — A woman says she is thankful to be alive after she was involved in a crash with an IndyGo Red Line bus.

She hopes talking about her experience will help save the lives of other drivers sharing the road with Red Line busines.

"The last thing I really remember is just getting hit by the bus," Jessica Watkins said. "And then when I open my eyes I saw the bus dragging my car the opposite way."

Watkins still has marks on her arms from the airbag deploying. Her car, now totaled, after the crash which occurred while Red Line drivers were practicing Aug. 30.

"Thankful after I looked at my car because looking at my car and also the placement, I realized I probably could have been killed that day," Watkins said.

Watkins was pulling out of the OneAmerica parking lot on Capitol Avenue between New York and Vermont Street when she inched out into the northbound bus lane.

"It's basically impossible to see the oncoming traffic without creeping out," she said. "That's the last part of it I remember I was kind a looking this way ... and then the bus hit me."

The crash report and an IndyGo spokesperson say Watkins hit the bus that was traveling northbound. A conclusion she says is unbelievable.

It is one of three crashes that have happened on Capitol Avenue where regular traffic travels southbound, but bus traffic goes both directions. IndyGo said it is called alternative analysis and transit routes ideally go both directions to help riders make transfers.

"I think it's ridiculous to ask motor vehicle drivers to cross two lanes of rapid transit coming directly out of the parking lot to begin with," Watkins said. "But then the fact that there is nothing warning you of an approaching, I would say bus, but the size of these are significantly larger than your typical bus."

IndyGo added signs that say, "Bus lane. Look both ways," after the crashes on Capitol. It's an effort to remind drivers that the buses travel both directions and drivers need to watch out.

OneAmerica also sent a message to employees after Watkins' crash reminding them to watch for buses and noting security officers would be on-site at the lots to assist drivers.

"We welcome the Red Line and the expanded transportation opportunities it brings to our community," OneAmerica's vice president of enterprise communications and community affairs Jennifer Pittman said. "As we adjust to changing traffic patterns, we have taken steps to raise awareness of new travel routes for buses, cars and bicycles. Our immediate response has been to add personnel to assist with traffic flow into and out of our lots and garages. The safety of our associates, building tenants and visitors is of utmost importance."

Watkins is relieved that OneAmerica is making extra safety precautions.

"I was really glad to see because I would not want a coworker or another OneAmerica employee to get seriously injured," Watkins said.

She hopes, moving forward, IndyGo would consider adding flashing lights or even a cross bar to make it safer for drivers and notify them buses are traveling both ways.