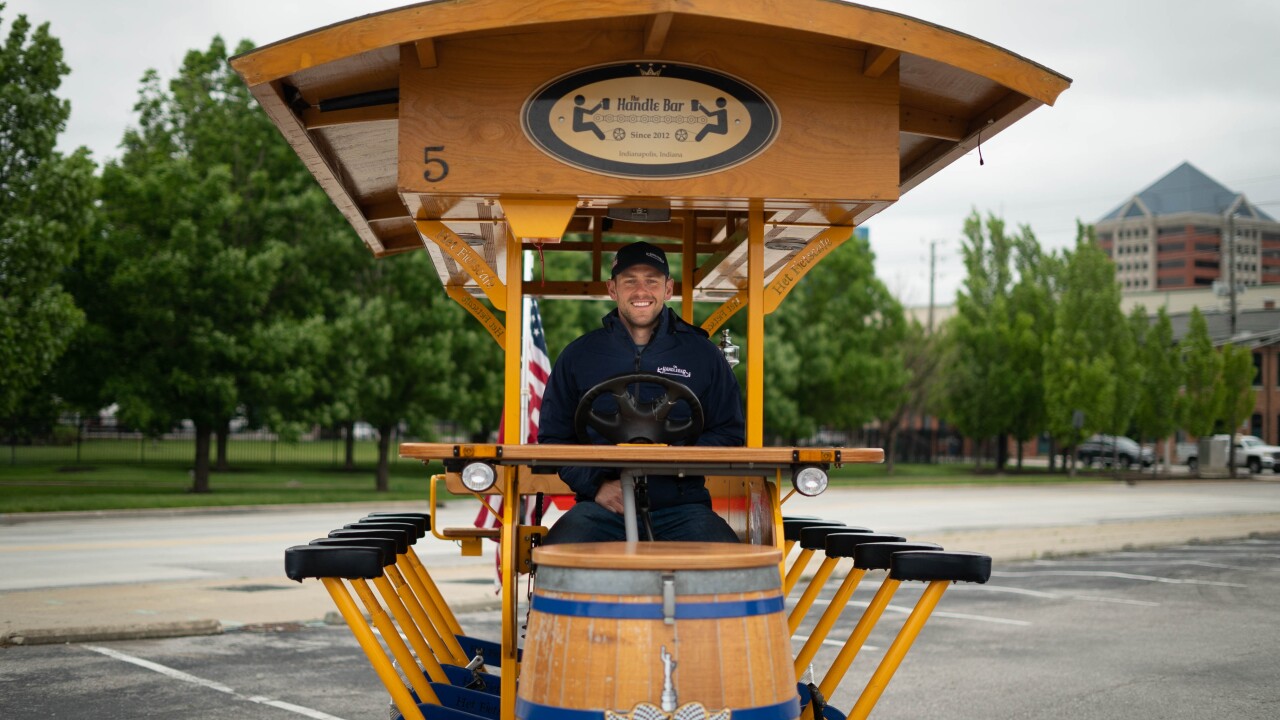 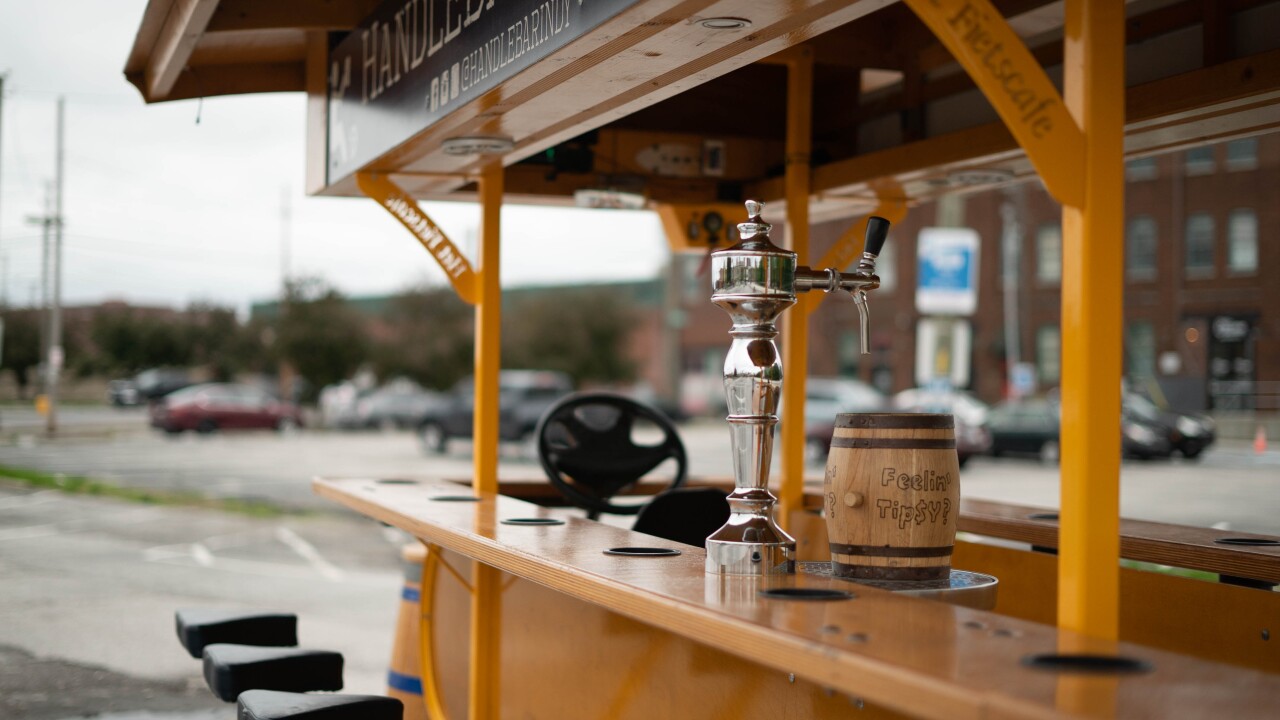 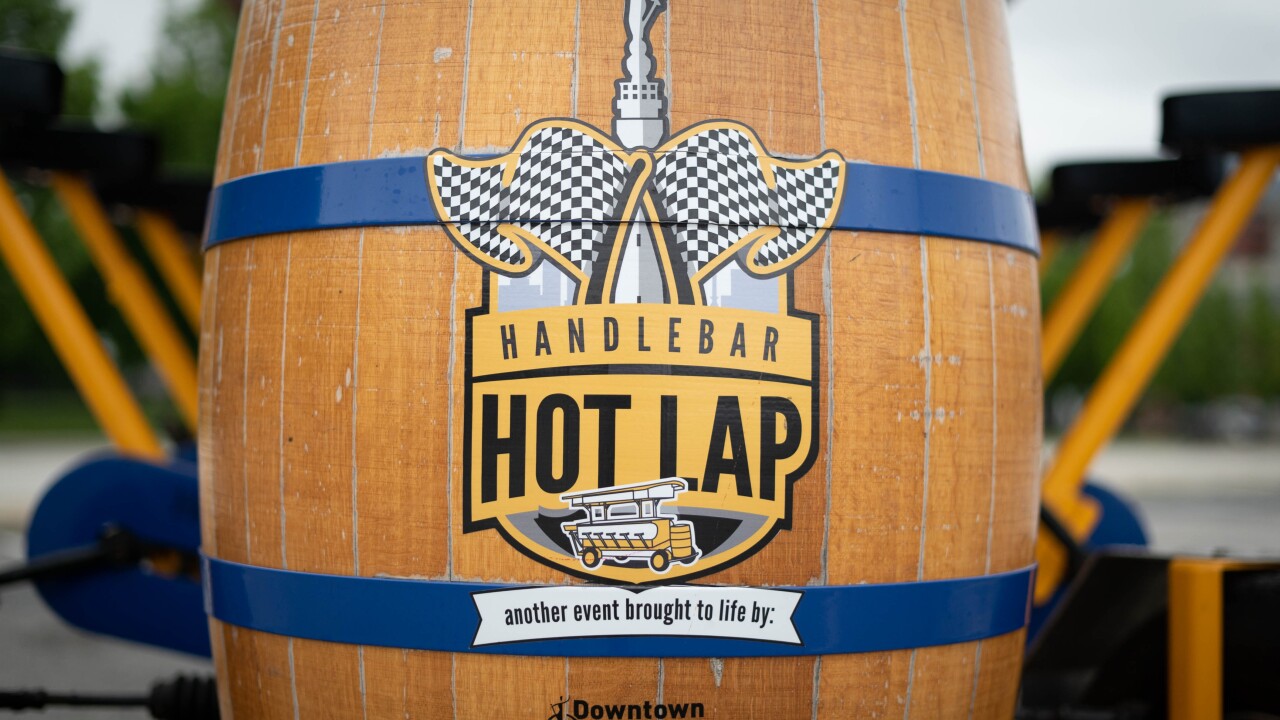 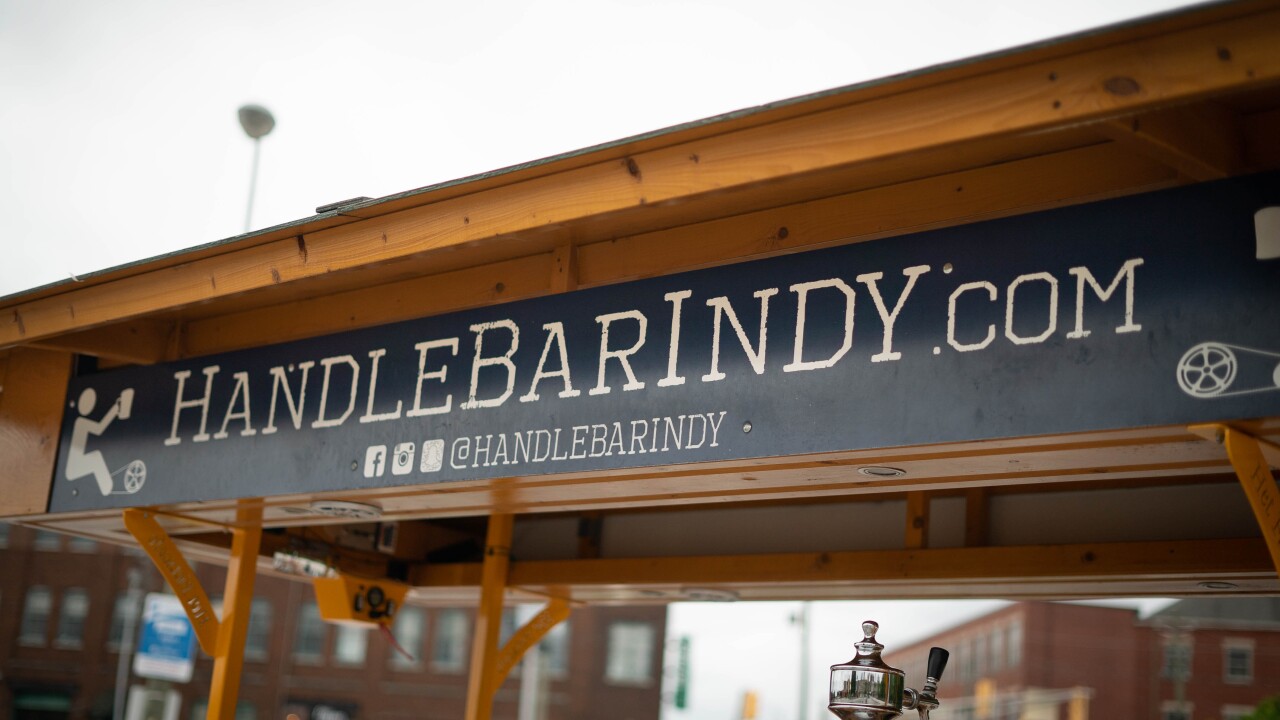 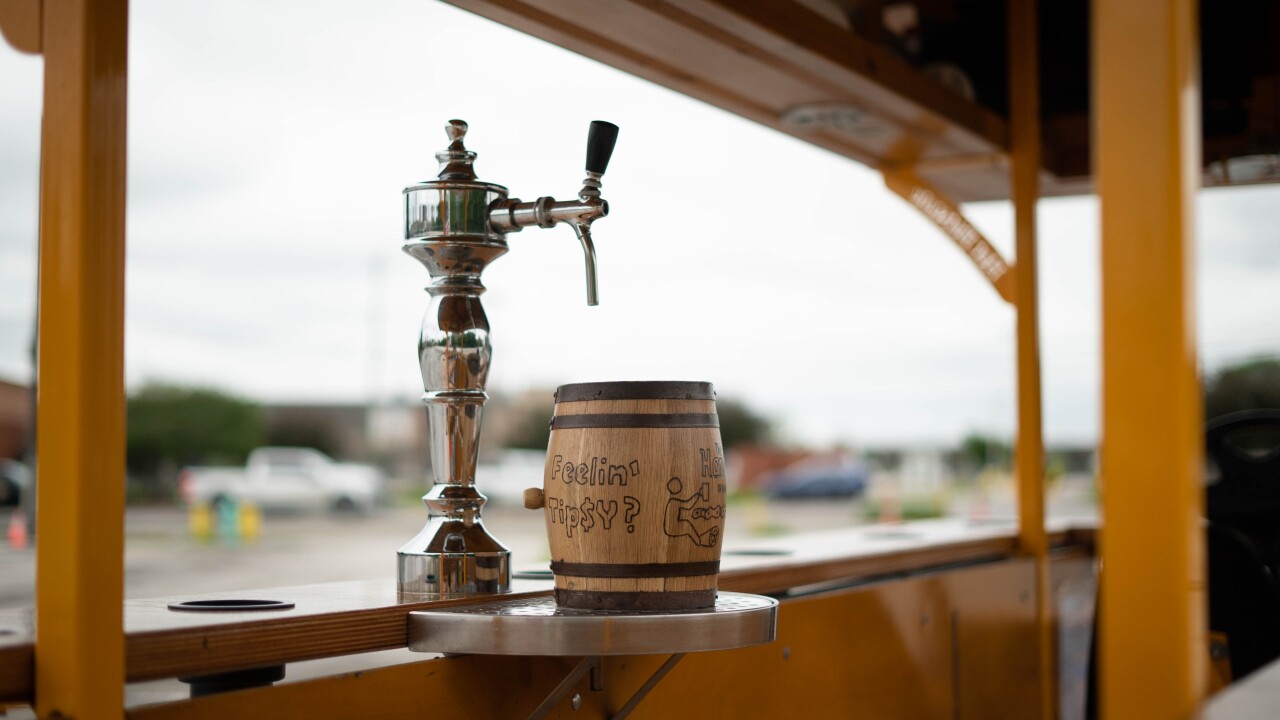 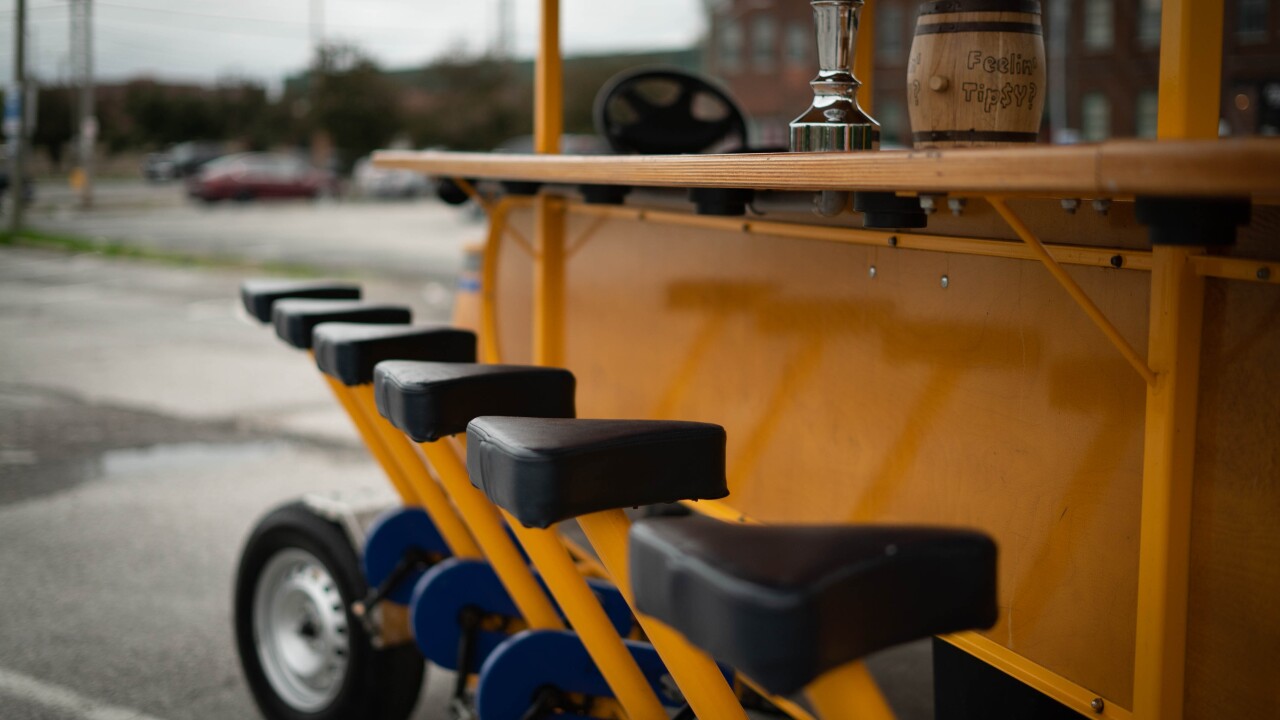 INDIANAPOLIS — Bar hopping still isn't a possibility at this point in Indiana's phased-reopening.

But one local entertainment favorite is pedaling back to the Indianapolis streets a little faster than most other venues can.

"We think it's a perfect experience for people to get back outside and experience Indy again," Steve Lindsay, the co-owner of HandleBar Indy, said.

The HandleBar Indy is a mobile biking platform that hops from bar to bar across downtown Indianapolis.

Steve and his brother, Brian Lindsay, own The HandleBar in Indy, Toledo, Ohio, Detroit, Michigan, and Adelaide, Australia. Indianapolis was the second location the brothers were able to get going again as the coronavirus closures start to ease, following Toledo.

"It's kind of a risk-free way for people to start making some plans," Steve said.

The HandleBar Indy opened this past weekend with new guidelines and safety precautions in tow.

"Typically we'd make a couple stops at the bars and on the Circle. And, ya know, the restaurants are going to be busy. They only have outdoor seating, and they can only do half capacity," Steve said of making a few changes as they ease bikes back on the streets. "There's probably not going to be enough capacity for us to drop off eight people and make quick stops."

Each of Handlebar's eight bikes can seat up to 16 people, but in reducing capacity in par with the state's reopening, bike's will only be servicing parties of eight people per bike. Guests are required to sit every other seat for now, as well.

"We've canceled all of our individual seat tours. Just because we don't want to intermix groups that might not have already been hanging out. Just private parties at half capacity," Steve said.

Other changes include not stopping at bars, and the HandleBar has also made some route changes.

HandleBar Indy will also coordinate with groups and restaurants for food-to-go during the tour. The drivers will call ahead, and the group can pedal to the destinations.

"We plan on making a couple stops at the war memorial ... it's just a good place to stop," Steve said of some other changes. "We have some games that the guests can play and ways to have some fun on the bikes instead of going into the bars."

Reservations filled up quickly this past weekend, according to Steve. He says people are excited to get outside and resume some level of normalcy.

"If you got eight friends that are close to each other, and they've already been hanging out, and they don't feel it's necessary for those eight, then we're not going to force it on them," Steve said.

The HandleBar Indy still has plenty of open space as we continue into the summer, but after a successful weekend like the last, you should get those reservations going.

"We're very happy with the turnout so far," Steve said. "We made our announcement shortly after the mayor made the go-ahead for businesses to start reopening, and that same day we had several bookings come in."

Booking requires a $50 deposit, and HandleBar is offering full refunds if, for some reason, things regress, and they have to cancel tours again due to COVID-19.