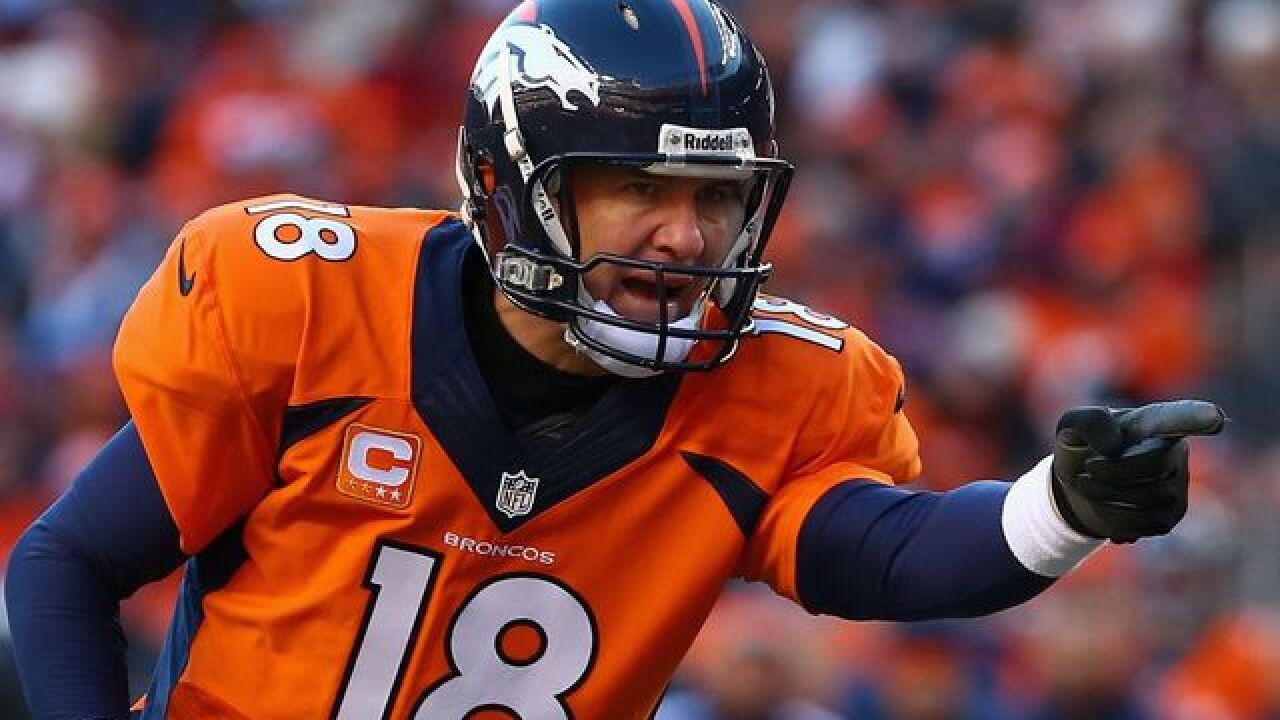 It's just that their 17th meeting no longer features a pair of icons in their considerable prime. While Brady remains as good as ever, Manning is clearly in his twilight.

Abraded, he now relies as much on guile and grit. His left foot damaged, his right arm diminished, his shoulders no longer haul the hopes of a franchise and its fans.

Manning's mind is now his most dangerous asset as he tries to reach Super Bowl 50 two months shy of 40.

That, and Brady has never won a playoff game in Denver.

Get this, though: Brady threw for three TD passes in Denver this season. Manning? Only one.

Brady led the league with three dozen touchdown throws and he passed for 4,770 yards despite seeing his receivers and running backs limp to the sideline seemingly as often as they spiked the ball in the end zone.

Manning threw just nine TD passes and 17 interceptions before missing seven starts with a torn plantar fascia near his left heel. His successful cameo against the Chargers secured the AFC's No. 1 seed, and he was both methodical and mistake-free in Denver's 23-17 win over Pittsburgh last week.

Brady and the Patriots tumbled through December after seeing their dreams of an unbeaten season end in the snow when C.J. Anderson's 48-yard run gave the Broncos a 30-24 overtime win on Nov. 29. But they looked championship caliber again in their 27-20 win last week over Kansas City.

While so much attention will be paid to Brady and Manning, this game could pivot on several other factors:

GRONK'S WONKS: Rob Gronkowski issued a good-natured but naughty retort on Twitter to Chris Harris Jr.'s tip that the only way to bring down the 6-foot-6, 265-pound tight end was to take out his knees. T.J. Ward said he'll go high or low, whatever it takes. Von Miller said, "I don't think it's ever been taught before how to tackle a guy who is 6-8, 300 pounds. It's never really been broken down. The thing that we have to do well is just get him on the ground."

DANGERFIELD DEFENSE: Denver led the league in several defensive categories: sacks, total yards, passing yards — and gripes about not getting its due as one of the best defenses ever. But linebacker Brandon Marshall said the Broncos realize that to be considered elite like the '85 Bears or '00 Ravens, they'll have to do what those teams did: win it all. Sending Brady to his seventh loss in nine trips to Denver would give them that chance.

GAME GRINDERS: Two years ago when these teams met in the AFC championship in Denver, the Broncos featured the league's No. 1 offense, a record-breaking bunch that lit up scoreboards aplenty. This time, they sport the league's No. 1 defense. Accordingly, the Broncos' formula has been to minimize mistakes on offense and keep things close until their play-making defenders come through. Their 10 wins by seven points or fewer are tied with the 1978 Houston Oilers for most ever.

ESSENTIAL EDELMAN: The Broncos are the only team with a winning record against Brady, who is 2-6 at Denver, including 0-2 in the playoffs. Both of those losses came when the Patriots were undermanned offensively. Brady has never lost (4-0) to the Broncos with both Gronkowski and receiver Julian Edelman in the lineup. Edelman (foot) missed the Nov. 29 game in Denver, and Gronkowski was knocked out of that game in the fourth quarter with a knee injury.

RECEIVERS OR RETRIEVERS: After dropping seven passes in windy weather against Pittsburgh, Broncos wide receivers found themselves running the "gauntlet" drill, catching rapid-fire passes from their left and right, a staple of the NFL's scouting combine. Star Demaryius Thomas had a drop last week and five the last time these teams met. Fans are starting to bug him about it, too.