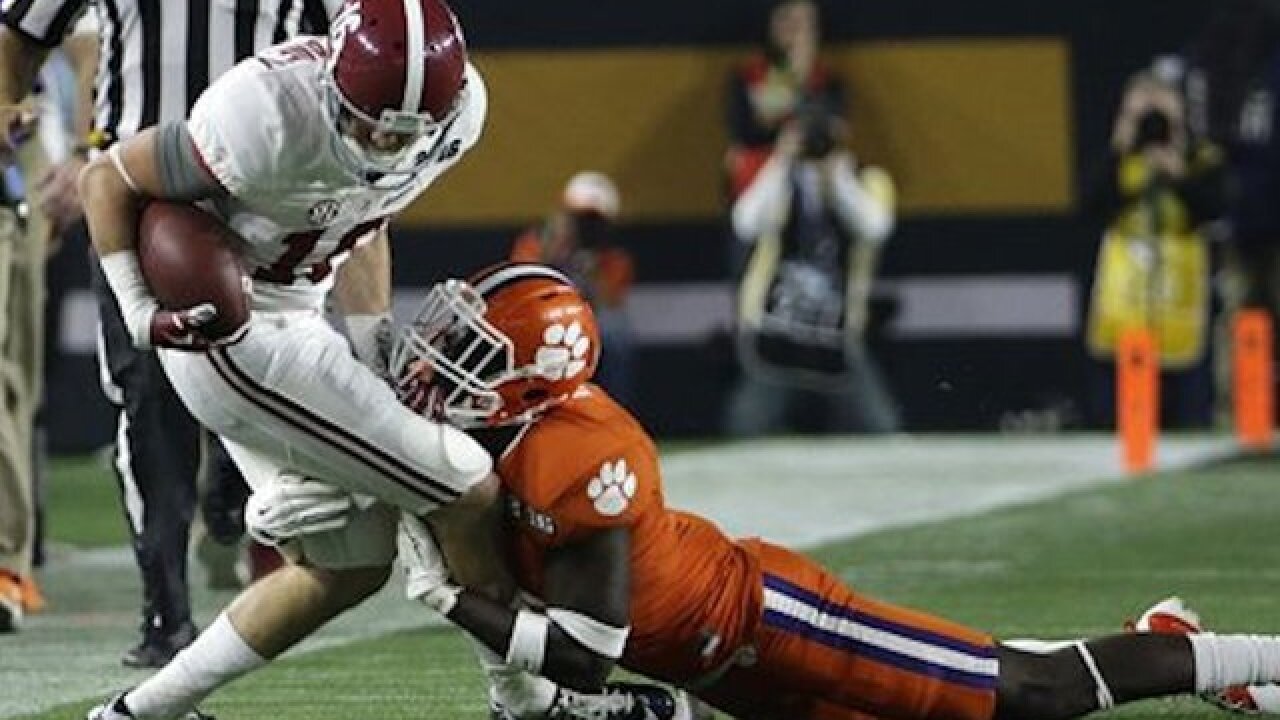 Your game is a unanimous choice to join the short list of some of the most dramatic, exciting, fantastic finishes to a college football season.

With one big play after another — by both teams — Alabama beat Clemson 45-40 on Monday night in the College Football Playoff title game.

An instant classic. And no doubt, this one will last for a long time.

The game was a thrill-a-minute. Heisman Trophy winner Derrick Henry ran for three touchdowns, including a 50-yarder to open the scoring. A daring on side kick with the score tied 24-all led to an Alabama points explosion, with quarterback Jake Coker throwing for two long touchdowns to tight end O.J Howard. Oh, and Kenyan Drake returned a kickoff 95 yards for another score.

Clemson didn't flinch. Dual-threat quarterback Deshaun Watson threw four touchdown and had 478 total yards — 403 passing. He was virtually a one-man show in keeping the Tigers ahead for a while.

In the end, it was too much Alabama, and the Tide won their fourth national crown in the past seven years. When the game ended, the entire crowd of 75,765 — the majority of them Clemson fans — stood and cheered. Not only for their team, but for the fabulous game they had just witnessed.

Here's a few other epic games that belong in the club:

A tie is an epic? When it comes to this one, it tops the list. Ara Parseghian's Notre Dame team came into the game unbeaten and ranked No. 1. Duffy Daugherty's Michigan State team also was unbeaten and ranked No. 2. The game, sometimes referred to as the "Game of the Century," ended in controversy as Notre Dame, playing at Spartan Stadium, elected not to try for a score on the final series. The not-so-Fighting Irish ended up No. 1 in the final AP poll. The game featured Terry Hanratty getting knocked out of the game after a sack by Michigan State's Bubba Smith. The Irish had the ball with 1:01 left after rallying to tie the score, and needed about 40 yards to get into Joe Azzaro's field goal range. Parseghian chose to run out the clock. Alabama finished the same season 11-0-0.

Miami, which considered shutting down its program due to lack of interest several years earlier, pulled off one of the greatest upsets to win its first national title. Led by gawky yet efficient quarterback Bernie Kosar, Miami built an early lead and the hometown crowd rocked the Orange Bowl. The potent Cornhuskers needed a trick play — a "fumblerooski" TD by lineman Dean Steinkuhler — to stay in the game. They pulled within a point with less than a minute left, but instead of kicking the extra point that would have assured a championship, coach Tom Osborne decided to go for the win with a 2-point try. Turner Gill's pass was swatted away by Ken Calhoun, and Miami benefited when higher ranked teams lost in earlier bowl games and rose from fifth to No. 1 in the final AP poll.

Miami was poised for another perfect season. They were a unanimous No. 1 choice riding a 34-game winning streak. Ohio State also was unbeaten, ranked No. 2, but appeared to be no match for the speedy 'Canes. Led by freshman running back Maurice Clarett, though, Ohio State outplayed Miami for much of the game. But it was a still debated pass interference call in overtime that gave the Buckeyes another chance, and they won 31-24 in double OT. With his team down 24-17 and facing fourth down in OT, Craig Krenzel's pass into the end zone was called incomplete by one official, but another ruled interference against Miami. Ohio State then tied it, and won it in the second OT for its first national crown in 34 years.

This game was like Alabama-Clemson for excitement, but had an even wilder finish. It was a No. 1 vs. No. 2 game, and USC was loaded — with two Heisman winners in running back Reggie Bush and quarterback Matt Leinart. Like Clemson's Deshaun Watson, Texas QB Vince Young piled up over 400 total yards, but his Longhorns came out a winner when he scored on fourth down in the closing seconds.

The Seminoles stormed to a 21-3 lead behind Heisman winner Jameis Winston, but Auburn caught up and the lead went back and forth with the Tigers going ahead 31-27 with 1:19 left. But Winston led them to victory — and the national title — with a short TD pass to Kelvin Benjamin with 13 seconds to go.