Ara Parseghian, won 2 titles at Notre Dame, has died at 94 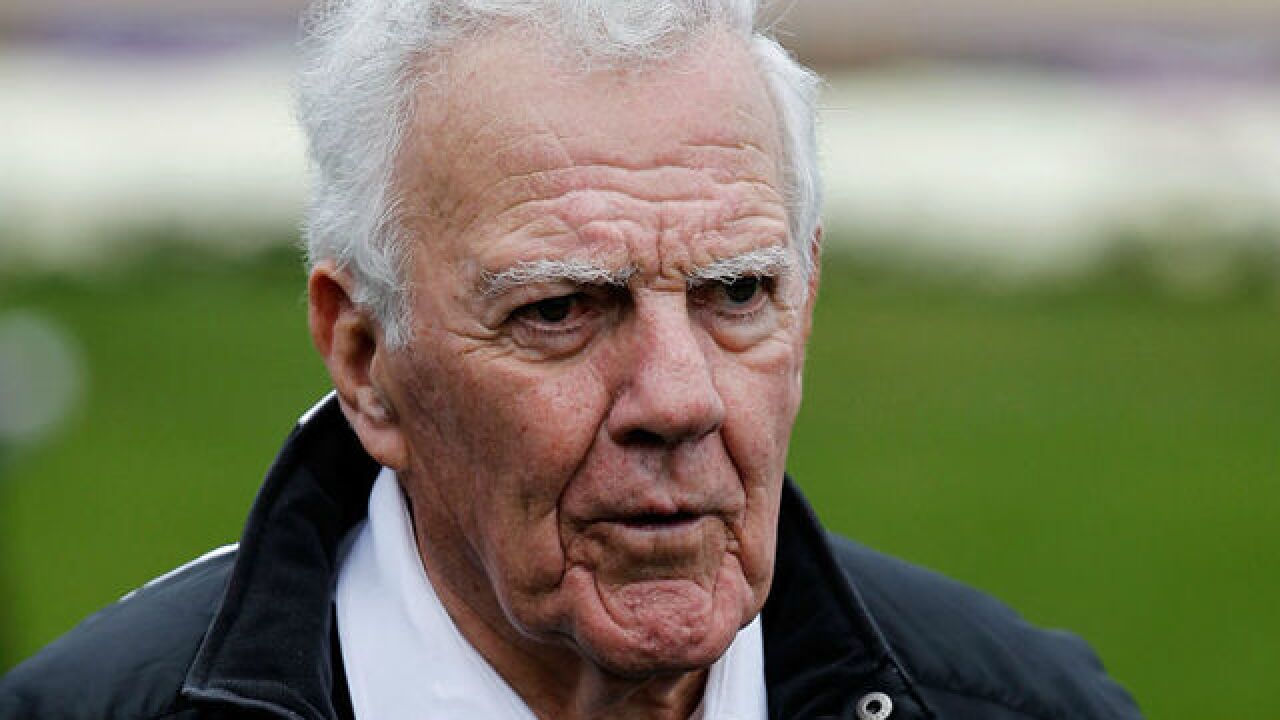 SOUTH BEND, Ind. (AP) -- Ara Parseghian, who took over a foundering Notre Dame football program and restored it to glory with two national championships in 11 seasons, has died. He was 94.

University of Notre Dame President Rev. John Jenkins announced in a statement that Parseghian died at home at 1:30 a.m. Wednesday.

Parseghian had recently returned to his home in Granger, Indiana, after spending more than a week in a nursing care facility in South Bend, Indiana. He was treated for an infection in his surgically repaired hip, and was still receiving round-the-clock care at home.

"Among his many accomplishments, we will remember him above all as a teacher, leader and mentor who brought out the very best in his players, on and off the field," Jenkins said. "He continued to demonstrate that leadership by raising millions of research dollars seeking a cure for the terrible disease that took the lives of three of his grandchildren. Whenever we asked for Ara's help at Notre Dame, he was there."

Parseghian, Knute Rockne and Frank Leahy are the only Irish coaches to lead the storied program to more than one national championship. His .836 winning percentage puts him third on Notre Dame's coaching list behind fellow College Football Hall of Famers Rockne (.881) and Leahy (.855). Only Rockne (105, 1918-30) and Lou Holtz (100, 1986-96) won more total games at Notre Dame.

Parseghian's Irish also finished No. 2 in 1970, No. 3 in 1964, were ranked in the top 10 in nine times and never finished ranked lower than No. 14. The Irish never lost back-to-back regular-season games under Parseghian.

Parseghian started his coaching career at Miami University, his alma mater, and then spent eight seasons leading Northwestern. He came to Notre Dame in 1964, with the Irish having gone five seasons without a winning record. Parseghian didn't just revive Notre Dame football. He made Fighting Irish fans believe in the program again. He later became a powerful advocate and fundraiser in the fight against rare diseases.

Parseghian led Notre Dame to national championships in two different decades, restoring the luster to what had been college football's most glamorous franchise in one of its most important eras. He began his tenure in South Bend with an impromptu pep rally that drew 2,000 students to the steps of a residence hall and eventually persuaded Notre Dame to end its longstanding policy against playing in bowl games.

Parseghian was so beloved by students that when the weather turned bad, chants of "Ara, stop the rain!" or "Ara, stop the snow" cascaded down from the grandstands.

"As a student, I enjoyed the thrill of being on campus for Ara's last three years as head coach, including the 1973 championship, and saw firsthand the profound impact that he had on my classmates who played for him," Notre Dame athletic director Jack Swarbrick said in a statement. "When I returned many years later as athletics director, Ara was unfailingly generous with his time, and his counsel proved to be invaluable."

When Parseghian stepped down, he had established himself as part of the school's "Holy Trinity" of coaches with Rockne and Leahy. He went into television work and spent more than a decade calling games on ABC and CBS.

"As you move through life, it's not going to be a bright sunshiny day every day. You're going to have disappointments. But how you handle those disappointments is the important thing for you and everybody that's around you. That's what I found from being not only a player, but also a coach," Parseghian said in 2012, when he was honored by the National College Football Awards Association with the Contribution to College Football Award for his work off the field.

He shocked the college football world when he left coaching, and although his name frequently came up for NFL and college jobs, he never returned to the sideline.

When Parseghian took over as coach in 1964, there was talk about Notre Dame's best days being behind it. He brushed away concerns that the academic standards were too tough and the Irish couldn't compete with the likes of warm-weather powers Southern California, Alabama and Texas.

The Irish were coming off a 2-7 finish in 1963 under Joe Kuharich when Notre Dame made a change. Parseghian was the first Notre Dame coach in 46 years without ties to the school. After his first game, a 31-7 victory over Wisconsin, Parseghian had the Irish ranked in the top 10 for the first time in three years. By early November, the Irish were still undefeated and ranked No. 1 for the first time in a decade. He brought the Irish within 93 seconds of a national championship in his first season before losing in the finale to USC.

He'll be most remembered for Notre Dame's 10-10 tie against second-ranked Michigan State in 1966 -- the so-called Game of the Century -- and a 24-23 victory over top-ranked Alabama in the 1973 Sugar Bowl. Both led to national championships and are still talked about decades later.

"I don't think I was a miracle man," Parseghian said in 2001. "Neither were Lou Holtz or Frank Leahy. We all found ways to win."

"I've always been in awe of the man," Theismann said in 2004. "I've always felt uncomfortable in his presence. I've always looked at him in a regal way."

Parseghian, who was born in Akron, Ohio, and served in the Navy, went 36-35-1 at Northwestern and 39-6-1 in five seasons at Miami of Ohio. At Miami, Parseghian played under Sid Gillman, renowned for his innovations in the game. With the Cleveland Browns in 1948-49, he played for Paul Brown until an injury ended his playing career. His first coaching job was as an assistant to Woody Hayes at Miami.

In 2007, Notre Dame unveiled a statue of Parseghian pumping his right fist as he sits atop the shoulders of three players after the win over Texas in the Cotton Bowl. The former coach said he didn't like the idea of a statue until he saw it.

"He had a mythic persona on campus," Jenkins said at the unveiling.

Parseghian spent his winters in Florida and the rest of the year in the South Bend area, watching the Irish closely. Coach Brian Kelly said he used to get a weekly notecard during the season from Parseghian with observations.

"He'll write a note like he doesn't want to assume anything, you know what I mean? Like he's never given any advice, just talking as a Notre Dame fan and alum. Great to just get that communication with him," Kelly said before the USC game in 2012.

Parseghian often tailgated before games outside Notre Dame Stadium, and then went home to watch the game on TV. He was worried that people at the stadium might misinterpret his reactions. And he could watch the game without being interrupted.

Parseghian is survived by his wife of 68 years, Katie; son Michael and daughter Kriss.