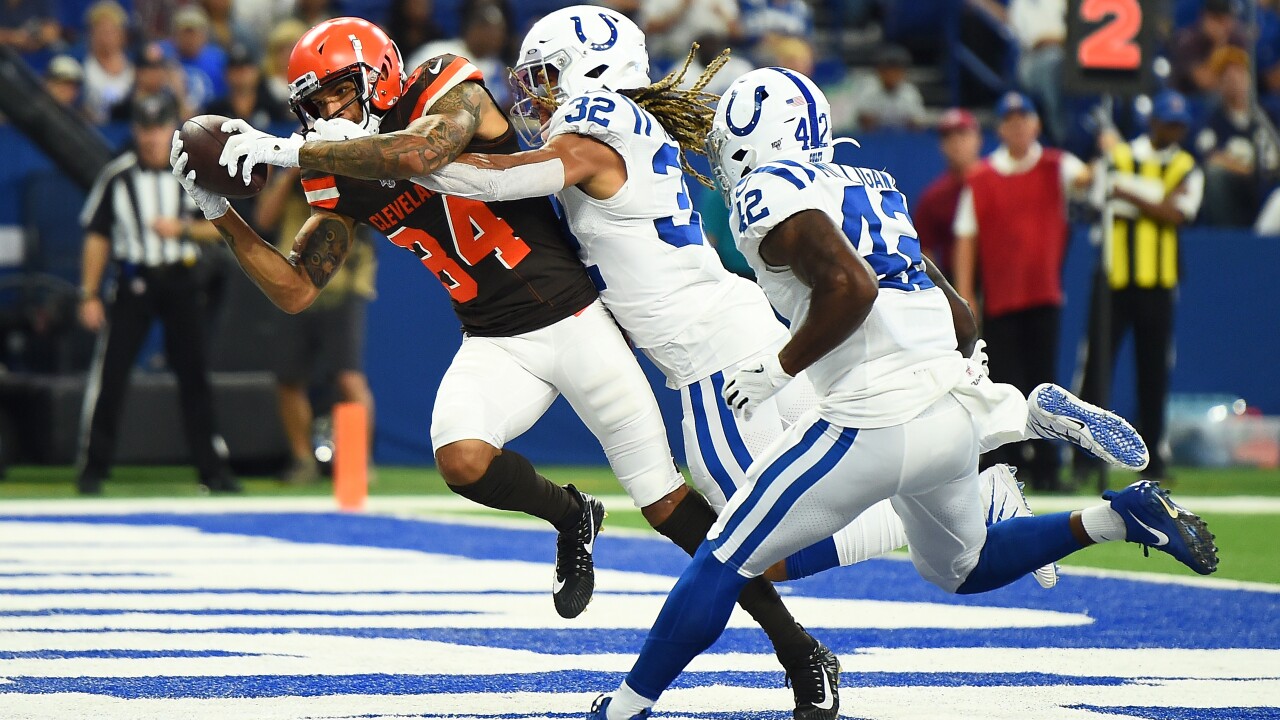 After watching two physical practices with the Indianapolis Colts and seeing one serious injury, he gave his top players the day off and allowed Garrett Gilbert and David Blough to go head to head for the No. 3 quarterback job. He even allowed Kareem Hunt to make a brief but meaningful return.

Gilbert threw two touchdown passes in the first half and Blough added another TD pass in the second half to give the Browns a 21-18 victory — their first preseason win over the Colts since 1979 when the franchise was still in Baltimore.

“I was very happy with Garrett. He came in and had control of the huddle, got the guys lined up, made some plays, made the plays he was supposed to make, and limited the mistakes,” Kitchens said. “I think given the circumstances, David Blough did also.”

Many key players weren’t on the field at all.

Indy also held out many of its stars including Andrew Luck and All-Pro guard Quenton Nelson, who are both injured, and Pro Bowl receiver T.Y. Hilton, who is not hurt. Adam Vinatieri, the league’s career scoring leader, missed his second straight game with an injured knee.

Chubb’s absence gave Hunt a chance to make his first start with the Browns albeit on a limited pitch count — two carries for 6 yards on two series. The 2017 NFL rushing champion last played Nov. 19, before a video surfaced of him shoving and kicking a woman. He was cut by the Chiefs two weeks later and didn’t sign with another team until February.

“It felt good to definitely get back in game mode, hear the crowd and the bright lights again.” said Hunt, who still must serve an eight-game suspension. “Just going day by day. Feeling it out, getting my legs underneath me, and just keep getting better.”

After that it was up to the backups to impress and they did.

Gilbert played the first half and was 13 of 19 with 151 yards and two scores, staking Cleveland to a 14-7 lead. Blough, the Purdue product, made it 21-7 with a 4-yard TD pass to Derrick Willies early in the third quarter. He finished 7 of 12 with 74 yards over the final two quarters.

But the Browns struggled to close it out and Chad Kelly almost made them pay for it.

Kelly made an immediate impact. He used a roughing the passer call to get the Colts into scoring position. He then threw a 24-yard TD strike to Ross Travis , who drew a lowering the helmet penalty. Kelly’s 1-yard conversion pass to Hale Hentges made it 21-18.

And he took the Colts to the Browns 9-yard line in the final minute before Will Harvey swatted away Kelly’s final throw on fourth-and-1 with 35 seconds left. Kelly was 12 of 17 with 115 yards.

“There was no chance of that,” Colts coach Frank Reich said when asked about kicking a field goal to force overtime. “There was no doubt we were going for it.”

Luck generated some real buzz by throwing the ball and participating in position drills during pregame warmups.

An injured lower left leg has prevented from practicing with the team since July 28. Reich cautioned not to read too much into the workout.

What Reich did like were the performances of Jacoby Brissett and Deon Cain. Brissett was 8 of 10 with 100 yards and one TD while Cain caught seven passes for 80 yards.

“I think what he (Cain) has been doing in practice showed up a little bit tonight,” Reich said. “He’s making plays and picking up where he left off last year.”

The teams combined for 29 penalties — 16 by the Colts. Neither coach was happy.

“You’re not going to win very many games with the amount of mistakes we made,” Kitchens said. “I think we need to play smarter. We were not smart tonight.”

Daurice Fountain said surgery on his injured left ankle went well and even joked about rejoining his teammates Saturday after the team’s Twitter account listed him as not dressing. He left the practice field Thursday on a golf cart and was taken to a hospital with what the team called a “significant” ankle injury.

“I can still get busy on these crutches if y’all need me to!!” he posted.