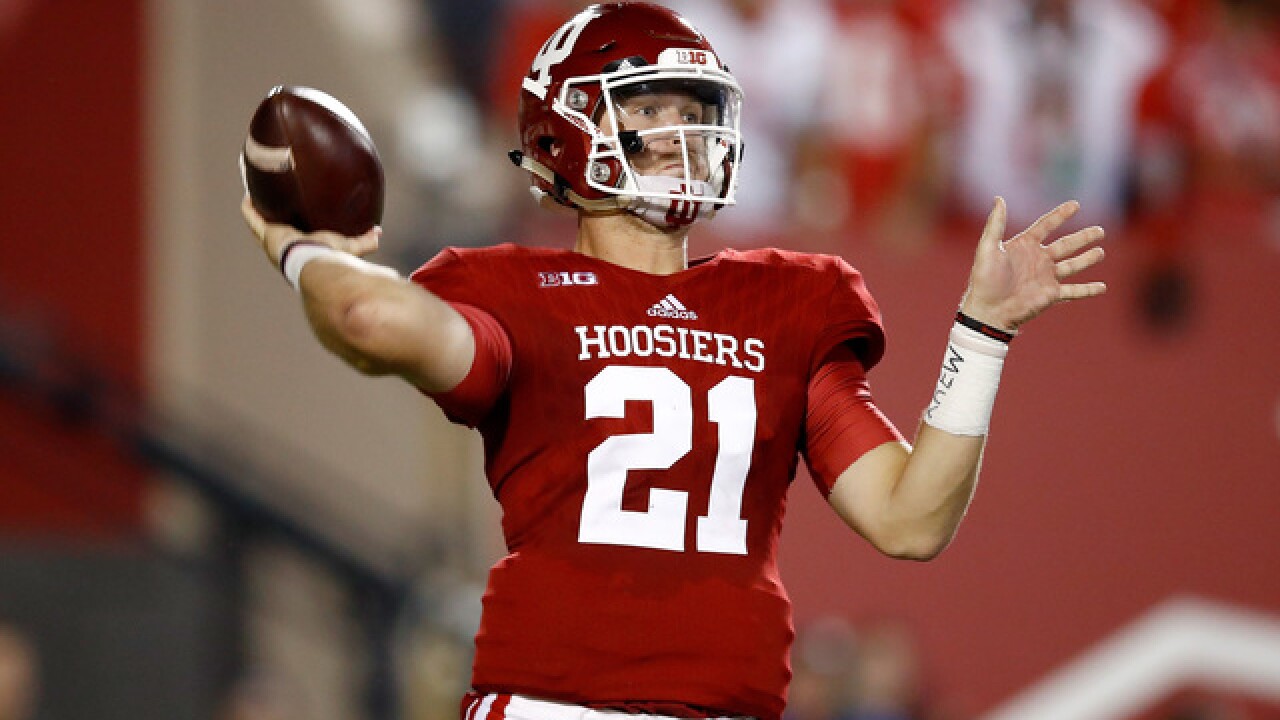 Copyright 2017 Scripps Media, Inc. All rights reserved. This material may not be published, broadcast, rewritten, or redistributed.
Andy Lyons
<p>BLOOMINGTON, IN - AUGUST 31: Richard Lagow #21 of the Indiana Hoosiers throws a pass against the Ohio State Buckeyes at Memorial Stadium on August 31, 2017 in Bloomington, Indiana. (Photo by Andy Lyons/Getty Images)</p>

Ellison, a freshman making his first college start, ran for 186 yards on 25 carries and two touchdowns. He's IU's 11th true freshman to rush for more than 100 yards in a game. It's the fourth-best total by a Hoosier freshman. Anthony Thompson has the record with 207.

Ellison entered the game with 71 yards on 19 carries.

The Hoosiers' Mike Majette had started the first two games at tailback.

Harris returned a first-quarter punt 70 yards for a touchdown. It was the second straight game he scored on a punt return. That tied IU's single-season record. Rob Turner was the other Hoosier to return punts for a TD in consecutive games. He did it in 1990.

Two other Hoosiers have returned two punts for touchdowns in a season — Mitchell Paige (2015) and Larry Highbaugh (1969).

Harris has returned seven punts for 183 yards this season after gaining 74 yards on two returns Saturday.

IU (2-1) was playing its first game after an unexpected bye. The Sept. 16 home game against Florida International was cancelled in the aftermath of Hurricane Irma.

The Hoosiers' decisive first quarter, which included a rotation between quarterbacks Richard Lagow and Peyton Ramsey, produced a 21-0 lead. After going up 31-0 early in the second quarter, defensive starters were rotated in and out, allowing younger players to get significant action.

Lagow and Ramsey combined to go 11-for-21 for 185 yards, a touchdown each and no interceptions. That included Lagow's 71-yard third-quarter touchdown pass to tight end Ian Thomas.

GEORGIA SOUTHERN: The Eagles were searching for offense after averaging a worst-in-the-nation 202 total yards in the first two games. They're still searching, although improvement is coming. They totaled 375 yards against IU. They committed 13 penalties for 108 yards.

INDIANA: The Hoosiers needed to prove they could get the running game going, which meant the offensive line needed to dominate. Mission accomplished, in part because of the return of right tackle Brandon Knight from injury. IU rushed for 282 yards, 185 yards in the first half. It entered game last in the Big Ten with a 69.9-yard average.