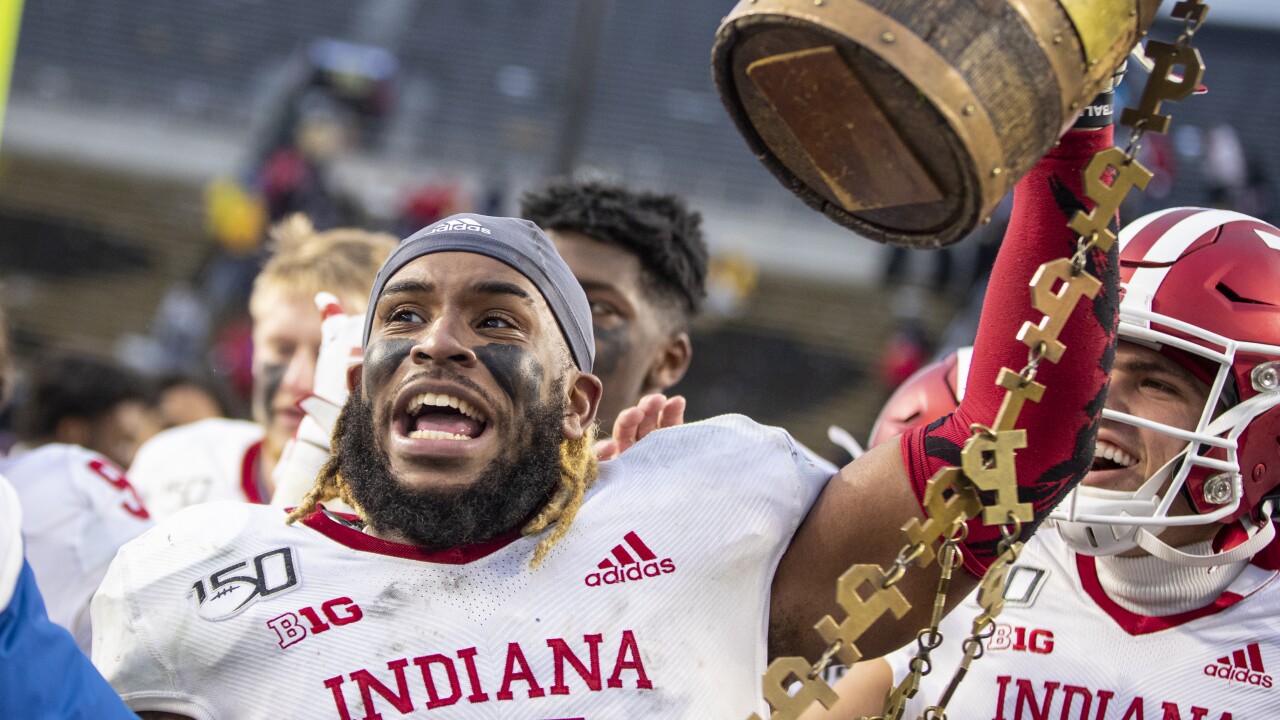 WEST LAFAYETTE — Peyton Ramsey threw three touchdown passes and scored on a 1-yard run in the second overtime Saturday to give the Indiana Hoosiers a 44-41 victory at Purdue.

But after throwing a 14-yard completion to Peyton Hendershot on third-and-10, Ramsey hurried the Hoosiers to the line of scrimmage, snapped the ball quickly and kept it himself as his offensive linemen helped push him around the right side and into the end zone.

PHOTOS | IU vs. Purdue in the Bucket Game

Teammates mobbed Ramsey, a two-year starter who lost the job in August, following the score.

“Those are the kind of plays you live for,” said Ramsey, who finished 23 of 39 with 337 yards and no interceptions, running 19 times for 42 yards while scoring twice.

Purdue quarterback Aidan O’Connell forced overtime with a 20-yard TD pass to David Bell and then hooking up with Brycen Hopkins on a 2-point conversion to tie the score with 2:48 left in regulation. O’Connell tied it again at 38 with a 6-yard TD pass to Hopkins on fourth-and-goal to end the first overtime.

“That's probably been our strength this year, we had guys that played hard to the end,” Purdue coach Jeff Brohm said. “Indiana deserved to win, they made plays when they had to.”

O’Connell was 28 of 49 for 408 yards, three touchdowns and one interception.

Indiana: The Hoosiers reclaimed the Bucket for the first time in three years and now have their first eight-win season since 1993. If they win their first bowl game since 1991, the Hoosiers will tie the school’s single-season record for victories.

Purdue: A four-win season certainly was not what the Boilermakers envisioned in coach Jeff Brohm’s third season. But when starting quarterback Elijah Sindelar and All-America receiver Rondale Moore were injured on the same play in the Big Ten opener, the whole season changed. What Brohm did find, though, was a group of competitive, talented true freshmen and redshirt freshman who can become the foundation or the future.

Indiana’s leading rusher, Stevie Scott III, missed the game for Indiana after hurting his leg during last weekend’s loss to No. 12 Michigan, and Purdue put Zander Horvath in the feature role for the first time this year.

Horvath and Sampson James both delivered with the best games of their careers.

After rushing for just 90 yards all season, James carried 22 times for 118 yards and one TD before leaving the game with a left leg injury early in the fourth quarter.

Horvath ran 23 times for 164 yards and two scores, becoming the Boilermakers’ only 100-yard rusher in 2019. He also lost one fumble.

Indiana: Whop Philyor had eight receptions for 138 yards and two TDs after sitting out last week with a head injury. ... Jamar Johnson snuffed off Purdue’s first scoring chance with an interception in the end zone on the game’s opening series. ... The Hoosiers have topped the 30-point mark in nine games this season, tying the school record. ... Logan Justus missed three field goals after coming into the game 9 for 9.

Purdue: Bell had nine catches for 136 yards and one score, while Hopkins caught eight passes for 142 yards and two TDs. ... Freshman defensive lineman George Karlaftis recorded his seventh sack of the season in the first half, matching Kaiwan Short for the highest-single total since 2012. ... The Bucket Game has been decided in overtime twice, both at West Lafayette and the Hoosiers won both times.

Indiana: Must wait until Dec. 8 to find out where they’re headed for bowl season.

Purdue: The Boilermakers will begin offseason workouts soon and will not return to action until Sep. 5 when they visit Nebraska.