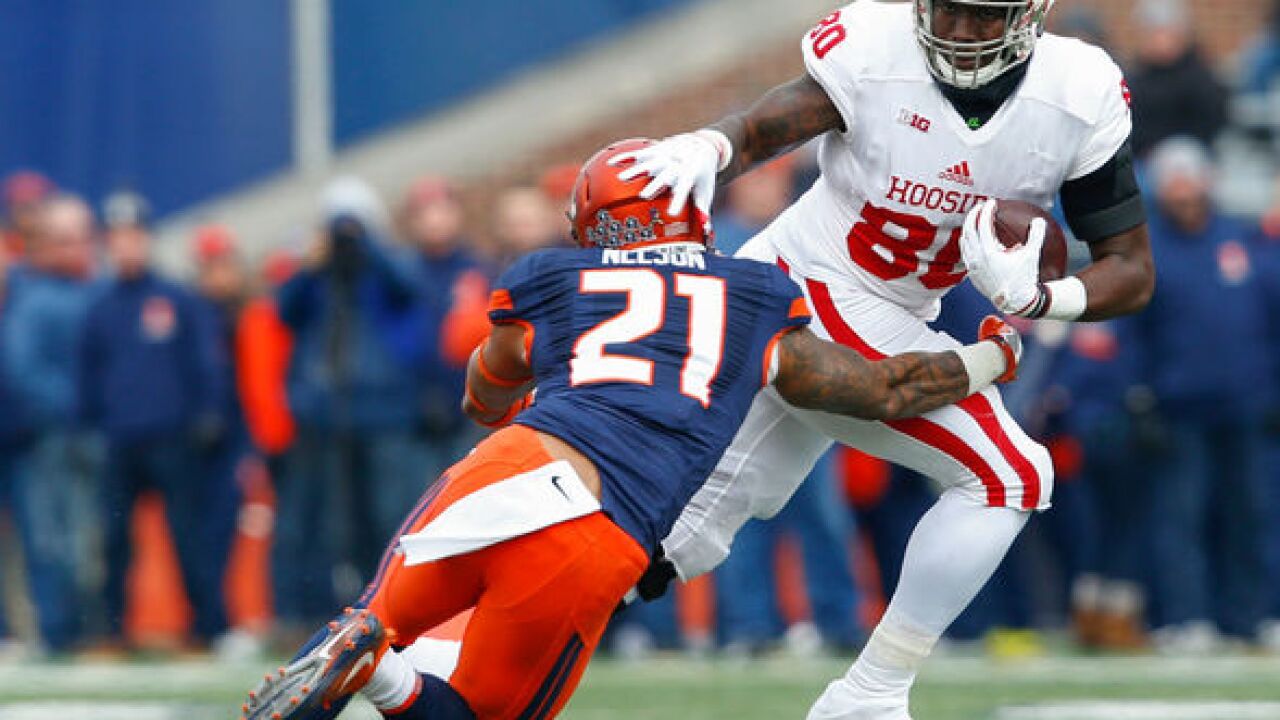 Copyright 2018 Scripps Media, Inc. All rights reserved. This material may not be published, broadcast, rewritten, or redistributed.
Michael Hickey
CHAMPAIGN, IL - NOVEMBER 11: Ian Thomas #80 of the Indiana Hoosiers runs the ball after a catch as Patrick Nelson #21 of the Illinois Fighting Illini attempts the tackle\ at Memorial Stadium on November 11, 2017 in Champaign, Illinois. (Photo by Michael Hickey/Getty Images)

CHAMPAIGN, Ill. (AP) -- Richard Lagow threw for 289 yards and two touchdowns, leading Indiana to a 24-14 victory over Illinois on Saturday.

The Hoosiers (4-6, 1-6) racked up 428 yards offense and used a balanced attack to earn their first Big Ten win of the season.

Coming into the matchup, Indiana was ranked last in the conference in rushing yards per game at 114.6. But on Saturday, Indiana had 139 rushing yards led by Cole Gest who ran for 82 on 17 carries.

Both teams got off to slow starts, but with 1:28 left in the first quarter Jalen Dunlap recorded his first career interception which set the Illini (2-8, 0-7) up at their own 44-yard line but they went three-and-out.

Morgan Ellison broke the scoreless tie on a 2-yard plunge with just under three minutes left in the first half. His fourth score of the season capped a 10-play, 45-yard drive.

Illinois didn't give up another rushing touchdown, but Lagow got the job done threw the air. He completed 32 of 48 attempts to 10 receivers with Ian Thomas and Simmie Cobbs Jr. both scoring.

The Illini struggled to find much offensive rhythm early. In the first half, Illinois recorded just 72 yards of total offense.

However, the Illini eclipsed that total on one play in the second half. On the first play of Illinois' eighth drive, Jeff George Jr. threw a 77-yard touchdown pass to Louis Dorsey.

Dorsey finished with three catches for 107 yards. Caleb Reams also caught a touchdown pass from George -- the first of Reams' career -- early in the fourth quarter. It brought the Illini within three. But that was as close as they would get.

George threw for 261 yards and two touchdowns, but lost a fumble and threw two interceptions in the fourth quarter.

The Hoosiers recorded seven sacks, 10 tackles for loss and three quarterback hurries in earning their first conference victory since Nov. 26 of last year.

Indiana: Coach Tom Allen emphasized all week long how big this game was for the direction of his program. The Hoosiers haven't had a winning season since 2007 and haven't won a bowl game since 1991. But with a win over Illinois on Saturday, Indiana's hope of ending those droughts remains intact.

Illinois: The Illini are still searching for an offensive identity. Lovie Smith elected not to go with a two-quarterback system as in past weeks. Although George made some big plays, he still hand three turnovers in the fourth quarter that put the game out of reach.

Illinos: The Illini play at  Ohio State on Saturday.

Indiana: The Hoosiers return home on Saturday to face Rutgers.