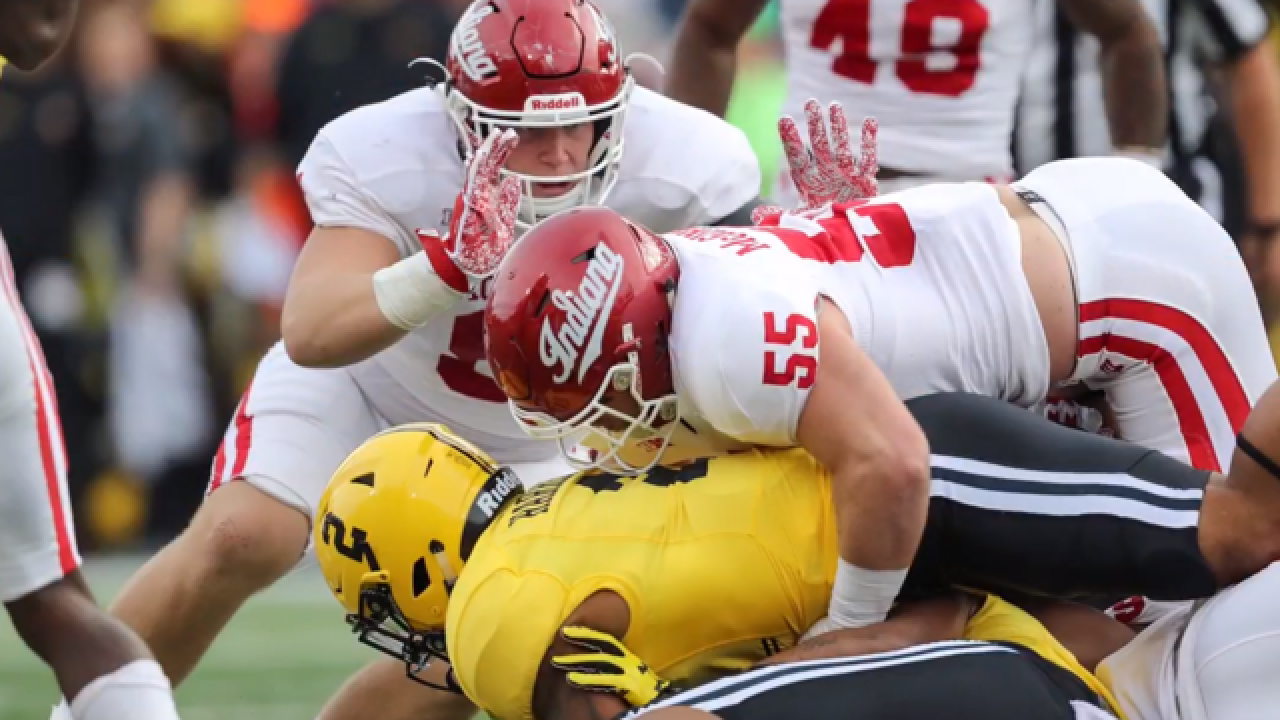 Copyright 2017 Scripps Media, Inc. All rights reserved. This material may not be published, broadcast, rewritten, or redistributed.
IU Twitter account

The Terrapins (4-4, 2-3) trailed 33-28 before rallying to snap a three-game losing streak. The comeback began with an 82-yard kickoff return by Javon Leake, and Funk put the Terrapins in front for good with a 1-yard touchdown with 14:56 remaining.

Funk scored again from the 1 with 10:14 left after Bortenschlager connected with DJ Moore for a 44-yard completion to the Indiana 17.

Indiana (3-5, 0-5) cut the gap to 42-39 but came up short in its bid to provide first-year coach Tom Allen his initial conference victory.

Peyton Ramsey went 31 for 41 for 279 yards and three touchdowns, and backup Richard Lagow passed for 131 yards and two scores. Ramsey was flattened by a late hit in the third quarter and returned the following series, but Lagow ran the offense for much of the fourth quarter.

Simmie Cobbs had 10 receptions for 138 yards and two TDs, Whop Philyor caught 13 passes for 127 yards and Luke Timian had 13 catches for 91 yards.

Indiana lost despite outgaining Maryland 483-345 and converting 11 of 23 third-down plays.

Maryland didn't play much defense, but safety Darnell Savage set up a touchdown with an interception and scored on punt he blocked.

Early on, Indiana dominated. The Hoosiers moved 75 yards on their first possession, taking a 7-0 lead on Ramsey's 34-yard touchdown pass to Cobbs.

Maryland's opening drive ended on its second play -- an interception by Tony Fields. Ramsey followed the turnover with a 23-yard pass to running back Cole Gest, who bulled through a potential tackler on his way to his first career touchdown.

After Savage helped Maryland close to 16-14, Ramsey connected with Timian for a score before Maryland scored two TDs in the final three minutes of the half.

Indiana: The Hoosiers thought their strong suit was defense, but that wasn't the case in this one. The rebuilding process under Allen appears to be working, though it's going to be a while before the Hoosiers can complete with the Big Ten elite -- let alone Maryland.

Maryland: The Terrapins showed something in this victory, especially after falling into a 16-7 hole. Maryland may not be able to hang with the big boys in the Big Ten, but this was a satisfying win by a team using a quarterback who began the season as a third-stringer.

Maryland: The Terrapins visit Rutgers (3-5, 2-3), which had its two-game winning streak snapped by Michigan on Saturday.