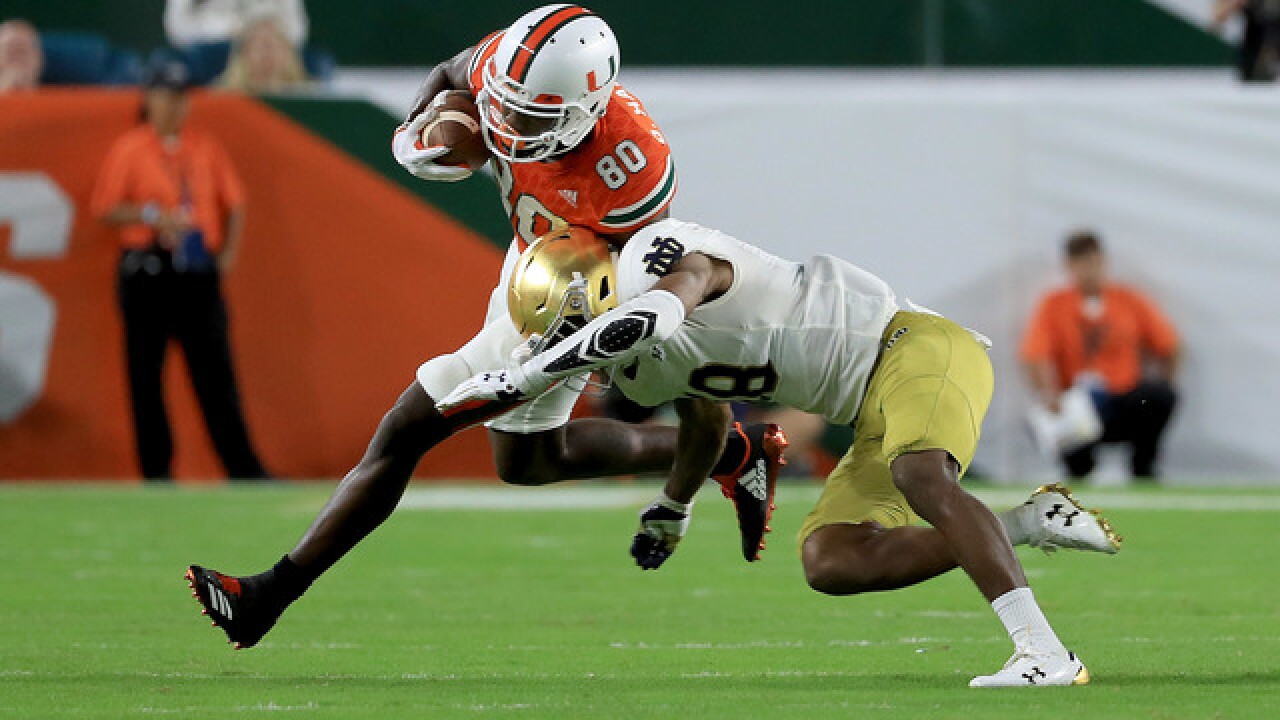 MIAMI GARDENS, Fla. (AP) — Miami is getting championship rings when this season is over.

The Hurricanes sent two very clear messages to the College Football Playoff committee Saturday night — that they're worthy of being a national title contender and that Notre Dame is not. Travis Homer ran for 146 yards, Deejay Dallas had a pair of touchdown runs and No. 7 Miami dominated No. 3 Notre Dame 41-8 to extend the nation's longest winning streak to 14 games.

"I never would have predicted what happened," Miami coach Mark Richt said of the rout. "But it happened."

Malik Rosier threw for a touchdown and ran for another for the Hurricanes (9-0, No. 7 CFP), who forced four turnovers for the fourth consecutive week and handed the Irish their second-worst loss in the history of the Miami-Notre Dame series. Only the 58-7 Miami romp in 1985 was more decisive.

"We didn't see this coming," Notre Dame coach Brian Kelly said. "Obviously, we felt we were prepared to play at a high level. We did not."

And it came on the day that Miami clinched its first trip to the Atlantic Coast Conference championship game. The Hurricanes wrapped up the Coastal Division title about an hour before kickoff when Virginia's loss to Louisville went final, giving Miami a berth against Clemson in the ACC title matchup on Dec. 2 at Charlotte.

WE LOVE OUR FANS! Thanks for coming out to campus this morning to rep the U at @CollegeGameDay. pic.twitter.com/ekTsSFs9eW

Alize Mack caught a 14-yard pass from Brandon Wimbush for the lone touchdown for Notre Dame (8-2, No. 3 CFP), which hadn't played a road game against the Hurricanes since 1989.

"We are back," former Florida governor and Miami fan Jeb Bush tweeted during the game.

Ed Reed was on the field pregame waving a Turnover Chain, the necklace that has become college football's most-discussed piece of jewelry this season. Vince Wilfork called Notre Dame out on Twitter for standing on the "U'' midfield logo in a pregame talk. The game was a sellout; a simultaneous concert a few miles south in Miami by Enrique Iglesias and Pitbull — both Miami natives with enormous fan bases — still had some tickets remaining not long before showtime.

For now, the 'Canes are the biggest thing in town again.

"Say whatever you want about us," Miami wide receiver Braxton Berrios said. "But at the end of the day, we're going to make you respect us."

Berrios made a diving catch for the first touchdown of the night, then ran back to the Miami sideline with his hands clasped behind his back — as if he was wearing handcuffs, a nod to the "Catholics vs. Convicts" moniker from the 1980s that still makes the Hurricanes seethe.

Rosier ran in from 16 yards out 88 seconds later after Jaquan Johnson got Miami's first interception of the night, and the Hurricanes were well on their way to the rout. Trajan Bandy's 65-yard interception return just before halftime sent the Hurricanes into the break leading 27-0, and Dallas scored twice in the second half.

"Growing up right before our eyes," Richt said.

Notre Dame was out of sorts all night. The Irish changed quarterbacks in the first half, giving Ian Book a look after Wimbush — who predicted that Notre Dame would have a dominant victory — started 2 for 10 with two interceptions. And Heisman contender Josh Adams got nothing going, finishing with 40 yards on 16 carries.

"Credit to them all over the place," Notre Dame linebacker Drue Tranquill said. "They played a whole game."

Notre Dame: The last time Notre Dame played at what is called Hard Rock Stadium was in the national championship game following the 2012 season, and the Irish fell behind 28-0 at the half on the way to getting routed 42-14 by Alabama. This one was eerily similar. Any chance that the Irish had of playing for a title again this year is now gone, and Notre Dame is just 12-12 in its last 24 games.

Miami: The team that was pulling off one miracle finish after another to squeak past unranked opponents with mediocre-at-best records a few weeks ago has now beaten ranked schools in consecutive weeks by a combined 69-18 count. The mismatch in this one was Miami's speed — Notre Dame simply could not keep up with the Hurricanes.

The Hurricanes will pass Notre Dame in both the Top 25 on Sunday and the CFP rankings that will be updated on Tuesday night and may now have a shot at one of the coveted top four spots.

There were at least 12 NFL teams with scouts at the game, and five bowls also sent representatives.