No. 9 Notre Dame wears down No. 14 behind Adams and Love 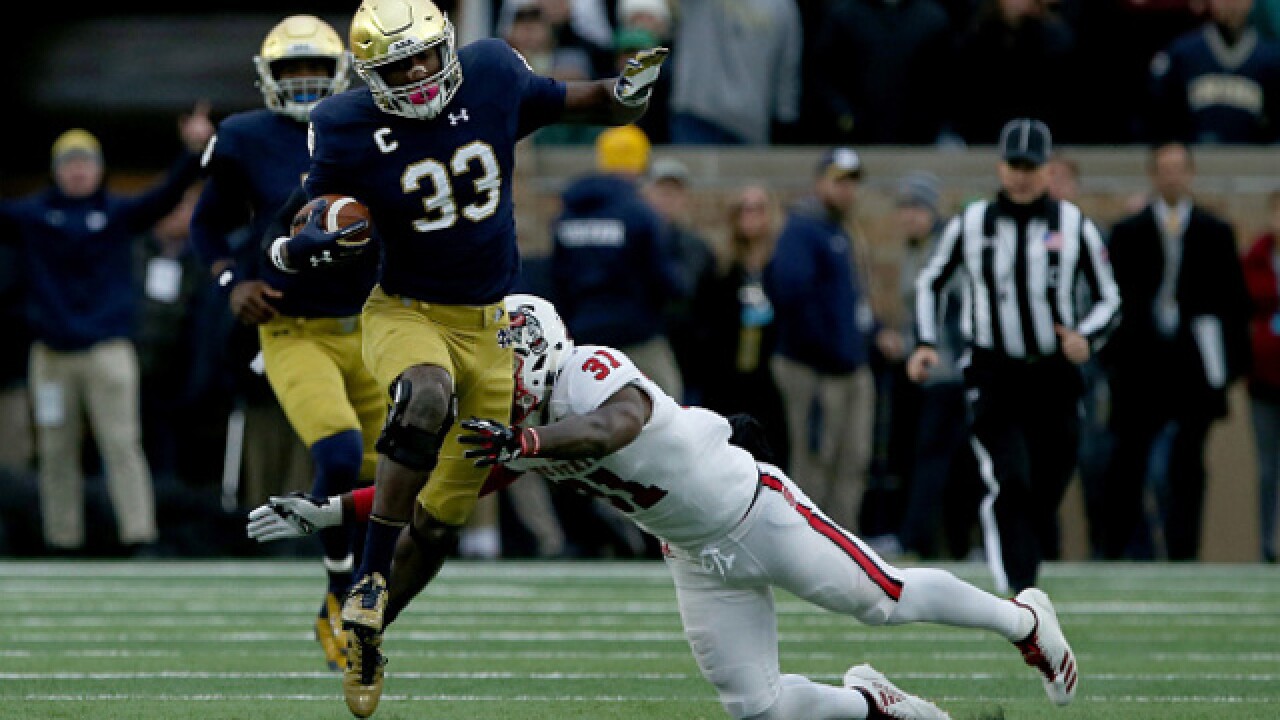 SOUTH BEND, Ind. -- Julian Love returned his second interception of the season for a touchdown and running back Josh Adams had another big day, rushing for 202 yards, to help No. 9 Notre Dame beat 14th-ranked North Carolina State 35-14 on a blustery Saturday.

Love's 69-yard return behind a convey of his defensive mates with 12:05 left in the third quarter ended N.C. State quarterback Ryan Finley's streak of consecutive passes without throwing an interception at 339. Love, who also broke up three other Finley attempts, had a 50-yard interception return for a TD in Notre Dame's 38-18 victory at Michigan State.

A little less than eight minutes after Love's theft, the 6-foot-2, 225-pound Adams, who earlier in the game became the quickest back in school history to go over 1,000 yards in a season on his 110th attempt, broke up the middle for a 77-yard touchdown run that provided further breathing room. Adams had his second 200-yard rushing game of the season and his sixth game over 100 yards this year.

The Irish, averaging just under 318 rushing yards a game, sixth best in the nation, finished right at 318 yards against N.C. State that had surrendered a paltry 91.3 yards a game coming in.

Finley ended with 213 yards and one touchdown on 17-of-37 passing. The Wolfpack played most of the game without all-purpose back Nyheim Hines, who injured an ankle in the first quarter on a kickoff return and did not return.

N.C. State: The Wolfpack return home to play defending national champion Clemson Saturday in a battle for first place in the Atlantic Coast Conference Atlantic Division. N.C. State, 4-0 in league play, is probably out of the national championship picture.

Notre Dame: The Irish, whose only loss this season came against No. 3 Georgia 20-19, keep their hopes alive for a possible College Football Playoff spot.

The first College Football Playoff rankings will be revealed Tuesday evening on ESPN.

N.C. State suffered a big blow to its offense when Hines, who had rushed over 100 yards in the previous three games, sustained an ankle injury on the kickoff following Notre Dame's first touchdown of the game. Hines, a track All-American, averages 178.4 all-purpose yards per game that was fourth nationally. Another all-purpose standout, Jaylen Samuels, and backup running back Reggie Gallaspy took his place.

Adams' 35-yard run in the first quarter took him over the 1,000-yard plateau on his 110th rushing attempt, the quickest in Notre Dame history. He finished the half with 102 yards on 18 carries, his sixth 100-yard effort of the season and fifth time he's reached the century mark before halftime. Wimbush's 3-yard TD run in the second quarter was his 11th rushing TD of the season, the most by a quarterback in a season.