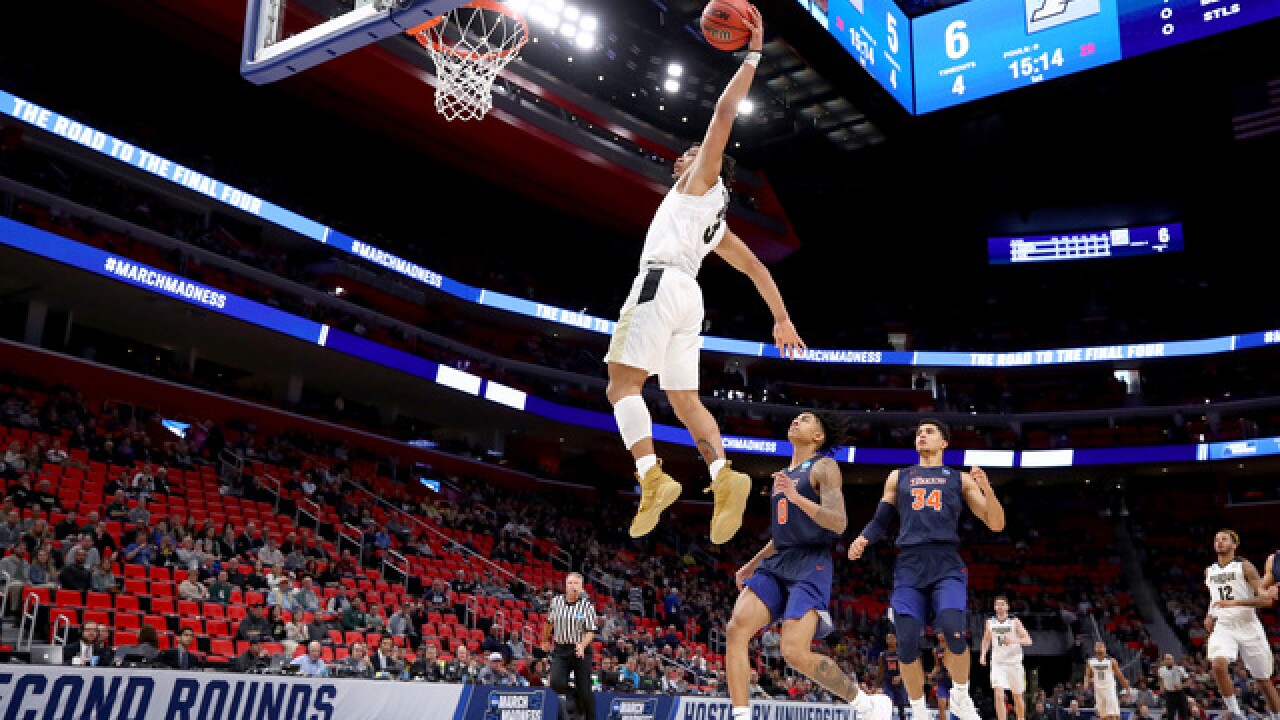 Copyright 2018 Scripps Media, Inc. All rights reserved. This material may not be published, broadcast, rewritten, or redistributed.
Gregory Shamus
<p>DETROIT, MI - MARCH 16: Carsen Edwards #3 of the Purdue Boilermakers dunks the ball on a breakaway against the Cal State Fullerton Titans during the first half of the game in the first round of the 2018 NCAA Men's Basketball Tournament at Little Caesars Arena on March 16, 2018 in Detroit, Michigan. (Photo by Gregory Shamus/Getty Images)</p>

DETROIT (AP) — Rust, it turned out, was the least of Purdue’s problems against Cal State Fullerton.

Boilermakers center Isaac Haas broke his right elbow in Purdue’s 74-48 victory on Friday and will miss the rest of the NCAA Tournament.

The 7-foot-2, 290-pound senior took a hard foul midway through the second half when Cal State Fullerton forward Dominik Heinzl pulled him down, trying to defend him. Haas hurt the same elbow in a win over Louisville in November.

“My whole body hit kind of awkward,” he said. “I just laid there for a second. When I rolled over, that’s when I felt my elbow.”

Haas left the game briefly, but returned and was joking about the hard fall when asked if he or the court got the worst of it.

“Probably the floor, honestly,” he said.

Not long after Haas and his teammates were making light of the injury during postgame interviews, Purdue released a statement from coach Matt Painter saying the big man will need surgery on his arm.

Second-seeded Purdue (29-6) will play Arkansas or Butler in Sunday’s second round with 7-3 center Matt Haarms likely replacing Haas, who averaged 14.7 points and 5.7 rebounds per game and had nine points and 10 rebounds in the first-round victory.

Without Haas, Purdue could lean more on star guard Carsen Edwards. The sophomore opened the first-round game with a step-back jumper and scored more inside and out when Purdue needed him most.

Edwards scored 13 of his 15 points in the first half and the rusty Boilermakers pulled away to rout Cal State Fullerton to advance.

Playing for the first time in nearly two weeks after losing to Michigan in the Big Ten Tournament final at Madison Square Garden in New York, the Boilermakers (29-6) needed nearly a half to find their rhythm on offense as they missed 12 of their first 17 shots.

“It’s been a while since we played a game,” Edwards said. “Just getting our legs under us.”

The Titans (20-12) led midway through the first half, and then Edwards took over. He had a go-ahead layup and scored seven more points to help Purdue lead 31-20 at halftime.

“He’s been doing that for us all year,” Vince Edwards said. “He’s always that guy that we can count on.”

The Big West Tournament champions couldn’t put up much resistance in the second half as the Boilermakers started making 3-pointers and using their big bodies to score inside to lead by 20-plus points.

ven with a big lead, though, Painter kept pushing his team to defend closely and share the ball offensively. Vince Edwards took heed and hustled back to block Jamal Smith’s attempt on a breakaway layup.

“It doesn’t matter what you’re up,” Vince Edwards said. “You’ve always got to play hard.”

“We felt we could play with them, and we did a great job,” Titans guard Khalil Ahmad said. “We were keeping them from getting easy baskets and we were hitting some shots. It just flipped on us in the second half. They started making everything and we couldn’t hit a shot.”

Call State Fullerton: The Titans were just happy to be in the NCAA Tournament, and they should have been because it is a rare feat for the program. They were in college basketball’s showcase for the first time in a decade and third time in school history.

“In spite of the outcome, no matter what happens the rest of their life, they’ll always be able to go back to Cal State Fullerton and be honored,” coach Dedrique Taylor said.

Purdue: Haas is one of four senior starters who were hoping to make a deep NCAA run to end their careers.

Taylor said he’ll never forget how he felt when the team was in a motorcade with a police escort, a luxury afforded to teams traveling to arenas during the NCAA Tournament.

“I was sitting in front of the bus with a smile in my heart because I know these guys deserve this and deserve to be in this moment,” he said.

Purdue faced Butler in the regular season and beat the Bulldogs 82-67 in December.