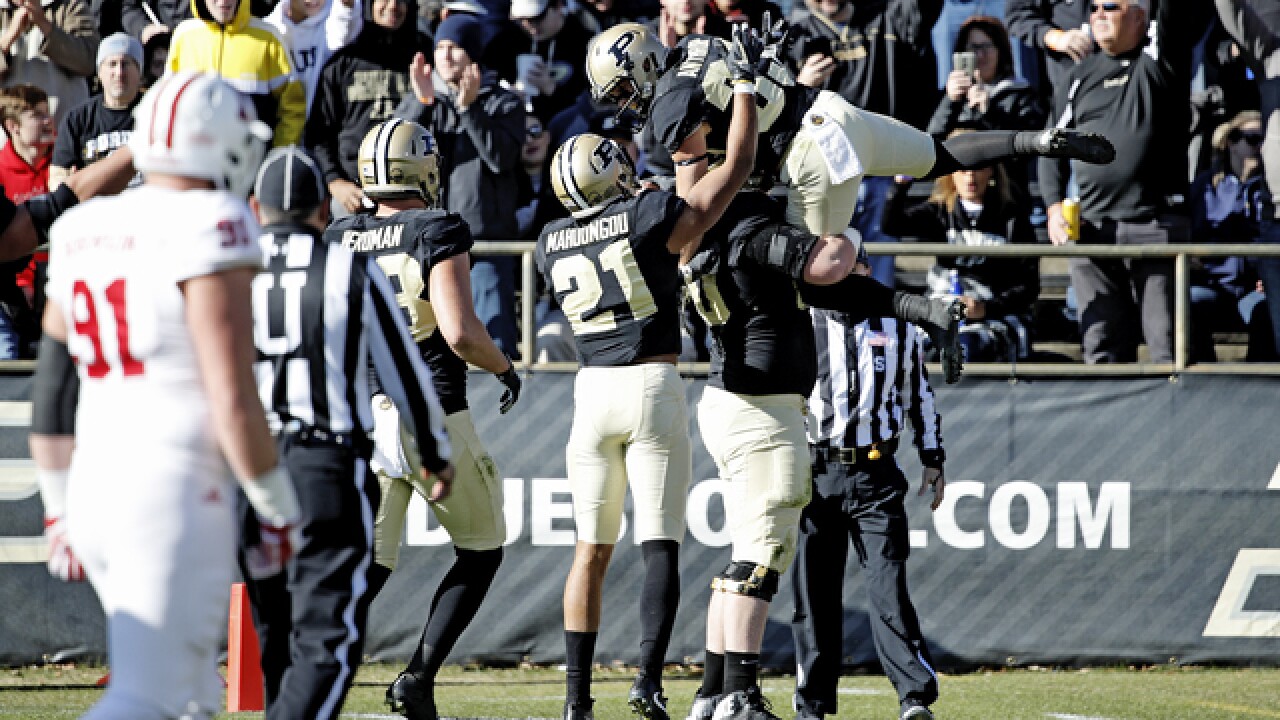 Copyright 2017 Scripps Media, Inc. All rights reserved. This material may not be published, broadcast, rewritten, or redistributed.
Joe Robbins
<p>WEST LAFAYETTE, IN - NOVEMBER 25: Jackson Anthrop #33 of the Purdue Boilermakers celebrates with teammates after rushing for a five-yard touchdown against the Indiana Hoosiers in the first quarter of a game at Ross-Ade Stadium on November 25, 2017 in West Lafayette, Indiana. (Photo by Joe Robbins/Getty Images)</p>

The Boilermakers (6-6, 4-5 Big Ten) won three of their last four to reclaim the Old Oaken Bucket for the first time since 2012. Jeff Brohm became the first Purdue coach to reach the postseason in his first year since the late Joe Tiller in 1997.

“You can see the smile on my face. It’s a great moment for our football team, for our university, for our fans,” coach Jeff Brohm said. “Definitely, a big win for us.”

Indiana (5-7, 2-7) had a two-game winning streak snapped and now must wait for other results to see if it might sneak into the bowl picture based on its Academic Progress Rate. Some teams with 5-7 records were taken each of the past two seasons because all of the bowl slots could not be filled by six-win teams.

And with Jones grinding it out in the second half, Purdue never gave the Hoosiers a chance. Jones carried the ball 31 times for the fifth-highest rushing total in the rivalry’s 120-game history.

“We just let go of ourselves a little bit in the beginning and weren’t able to come out of it,” coach Tom Allen said. “That’s on me.”

The Boilermakers were in control almost from the moment Garrett Hudson picked off Richard Lagow on Indiana’s first offensive play. Anthrop scored on a 5-yard run on the next play.

Indiana used a first-quarter fumble recovery to set up the tying score, a 1-yard TD pass from Lagow to Simmie Cobbs Jr.

But a late first-half scoring flurry turned the game.

After converting a fourth down on a fake punt, Anthrop broke the tie with a 4-yard TD run. The Boilermakers made it 21-7 when Anthony Mahoungou beat Rashard Fant on a jump ball and sprinted to the end zone for a 49-yard score with 53 seconds left.

Indiana answered with a 22-yard field goal to make it 21-10 at the half but couldn’t get any closer.

Purdue extended the lead with a 26-yard field goal late in the third quarter and sealed it with a 4-yard TD pass from Sindelar to Isaac Zico early in the fourth.

But Purdue snuffed out the rally by recovering an onside kick with one minute remaining.

Indiana: The Hoosiers came into this season with big expectations and fell short of most of them. They failed to get a breakthrough win, lost the Bucket and as a result probably won’t make a school record-tying third straight bowl appearance. Still, there are brighter days ahead for first-year coach Tom Allen with so many key players back next season.

Purdue: While the Boilermakers’ turnaround is far from complete, Brohm is off to a terrific start. After Purdue won nine games in the previous four years, Brohm won six this season to reclaim the Bucket and get Purdue back in the postseason.

Indiana: Will watch the scores to see if they could be one of the lucky few 5-7 teams.

Purdue: The Boilermakers will watch the bowl projections and may be taking phone calls until selection day.