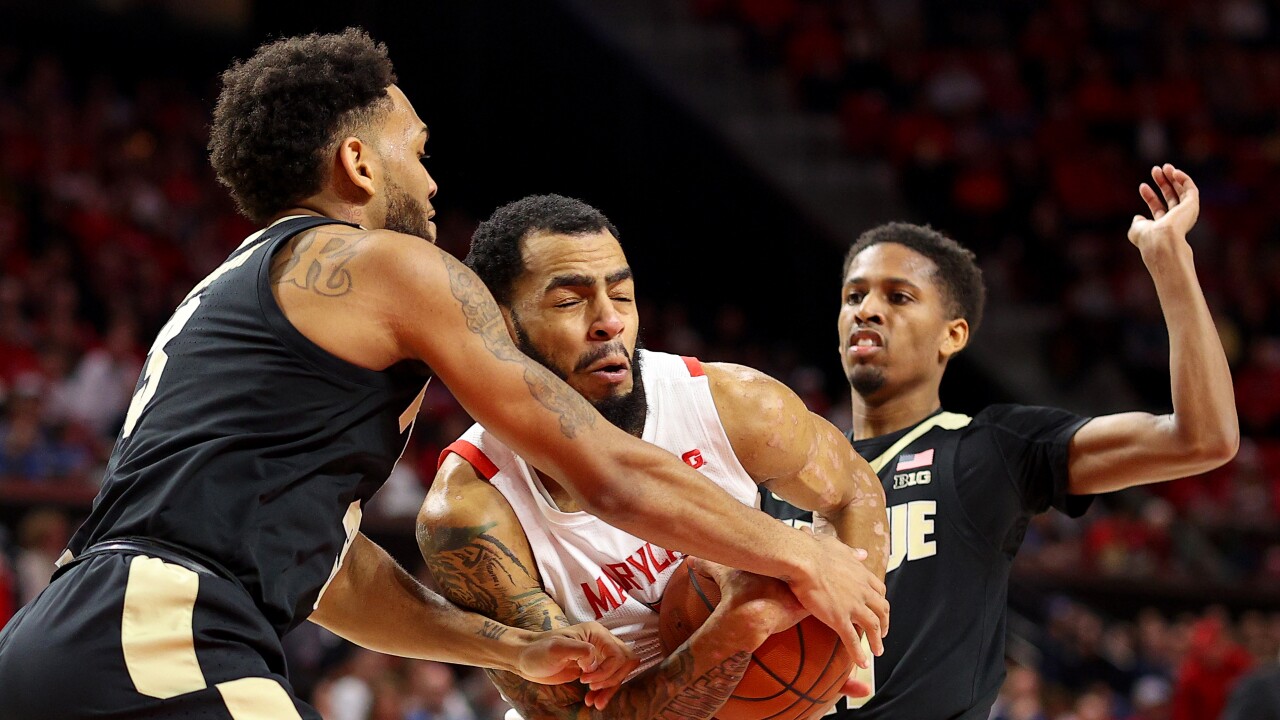 Rob Carr/Getty Images
COLLEGE PARK, MARYLAND - JANUARY 18: Eric Ayala #5 of the Maryland Terrapins is fouled by Jahaad Proctor #3 of the Purdue Boilermakers as Isaiah Thompson #11 looks on in the second half at Xfinity Center on January 18, 2020 in College Park, Maryland. (Photo by Rob Carr/Getty Images)

COLLEGE PARK, Md. — Following two straight losses — one lopsided, another agonizingly close — No. 17 Maryland was under intense pressure to maintain its unbeaten record at home.

Getting 18 points and 10 rebounds from Jalen Smith, the Terrapins defeated Purdue 57-50 on Saturday to avoid their longest skid of the season.

“We needed a win. Obviously, it's an understatement," coach Mark Turgeon said. “We did a lot of things great. Probably what we did the best is, coming off a tough loss on the road — a game we probably could have won — our guys responded. Showed you a little bit about our guys, the way we came out."

After falling to Wisconsin 56-54 on Tuesday, the Terrapins (14-4, 4-3 Big Ten) showed their resilience by scoring the game's first nine points and quickly moving in front 28-10. Purdue battled back, finally closing to 53-50 with 3:52 left before the rally fizzled.

Freshman Donta Scott scored a career-high 13 points, Aaron Wiggins added 12 and Anthony Cowan had seven assists for Maryland, now 11-0 at home and 0-4 in away games. So it goes in the Big Ten, where winning on the road is never easy.

The Terps seemed on their way to a lopsided victory before being outplayed by Purdue (10-8, 3-4) in the second half. Maryland led by 10 points before Trevion Williams hit a jumper and Isaiah Thompson connected from beyond the arc to make it 52-47.

“We came out slow in the second half. We just let it slip," Smith said. “But we recovered and tried to hold them off as best as we could."

It was 53-50 before Smith followed a Purdue miss with a resounding dunk with 2:06 remaining. A series of missed shots and turnovers followed before Cowan made two free throws with 12.5 seconds to go.

The Boilermakers went scoreless over the final 3:52.

Nojel Eastern scored 14 points for Purdue. Looking for an encore to their 71-42 rout of Big Ten leader Michigan State last Sunday, the Boilermakers instead fell to 1-5 on the road — their lone win was at Ohio last month.

The Boilermakers were 8-0 this season when holding the opposition to 59 points or fewer.

The Terrapins held Purdue scoreless over the opening 4 1/2 minutes and took a 20-4 lead while getting assists on each of their first seven baskets. Five of those field goals were 3-pointers, including two apiece by Smith and Wiggins.

On the other end, the Boilermakers shot 29% during the first 13 minutes and misfired on all four 3-point attempts.

Purdue: The Boilermakers just don't seem to have the same intensity or shooting touch when on the road. That's how it is for most Big Ten teams, but this defeat is hard to fathom immediately after a rout of Michigan State.

Maryland: If the Terrapins are going to struggle on the road, which seems to be the case, they've got to excel at home. And fortunately, that's exactly what Maryland has done in College Park.

The Terps hope this victory offsets their disappointing loss at Wisconsin and enables them to move up a notch or two in the AP Top 25.

Purdue hosts Illinois on Tuesday night. The Boilermakers were blown out by the Fighting Illini 63-37 on Jan. 5.

Maryland's quest for its first road win continues Tuesday night at Northwestern, the cellar dwellers of the Big Ten.