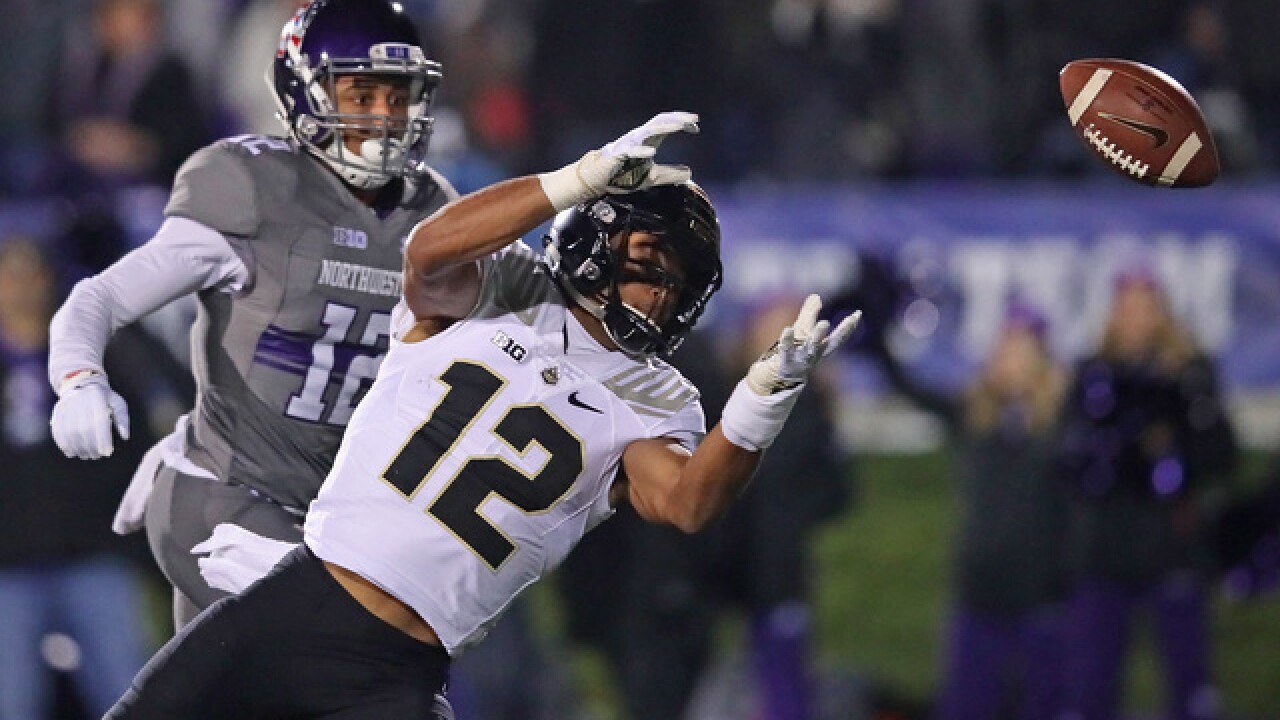 Copyright 2017 Scripps Media, Inc. All rights reserved. This material may not be published, broadcast, rewritten, or redistributed.
Jonathan Daniel
<p>EVANSTON, IL - NOVEMBER 11: Jared Sparks #12 of the Purdue Boilermakers misses a catch in front of Alonzo Mayo #12 of the Northwestern Wildcats at Ryan Field on November 11, 2017 in Evanston, Illinois. (Photo by Jonathan Daniel/Getty Images)</p>

EVANSTON, Ill. (AP) — Although his team's mantra is to focus on one week at a time, Clayton Thorson couldn't help revisiting the previous five weeks on Saturday night.

Thorson had a pair of touchdowns, Charlie Kuhbander hit all three of his second-half field goal attempts and Northwestern won its fifth straight with a 23-13 victory over Purdue.

"To win five straight in the Big Ten, with the teams we play, is pretty impressive," Thorson said. "It's been a fun stretch with these guys."

The junior quarterback was 26 of 46 for 296 yards. He had an 11-yard TD pass to Bennett Skowronek and rushed for a 4-yard score. It was the 18th rushing touchdown of Thorson's career, tying him with Brett Basanez for third place for most by a quarterback in school history.

Elijah Sindelar was 37 of 60 for 376 yards with two TDs and an interception for Purdue (4-6, 2-5). The sophomore established career highs in completions, attempts and passing yards. Sindelar had just 111 yards on 26 attempts in the first half as the Boilermakers were shutout.

"He hung in there," Purdue coach Jeff Brohm said. "In the second half, he played better. When we kind of went to some base passing game in the second half and spread the field a little bit, he was able to a good job and distribute the ball."

Purdue was 1 for 4 on fourth down with the only conversion coming on a fake punt. The Northwestern defense came up with three stops on a fourth and short, including a fourth-and-1 from the Purdue 45 with just less than 14 minutes remaining.

Kuhbander hit a 36-yard field goal on the ensuing drive to give the Wildcats a 23-7 edge with just under 12 minutes to go. He has 12 field goals on the season to establish a new school record for a first-year player.

"It always starts up front when you're able to get that push," Northwestern coach Pat Fitzgerald said of the stops on fourth down.

"The last two weeks we talked about having our backs against the wall and that we need to win to advance and stay in it," Brohm said. "Last week they responded. This week we did not."

Northwestern also had a fourth-and-1 stop from the 4 late in the second quarter. The Wildcats then drove 96 yards in 1:33, scoring a touchdown with 16 seconds left for a 14-0 lead.

"That's like a 14-point swing," Fitzgerald said. "It was an outstanding flip of momentum, and I thought we started the third quarter pretty fast, too, with a good drive."

"They basically did what we thought they were going to do, and that's load the box to do everything they could to stop Justin," Fitzgerald said. "We needed Clayton and the receiving corps to step up, and they did."

Purdue: There's little question the Boilermakers are improved, but they will need to win the final two regular-season games against Iowa and Indiana to become bowl eligible. Purdue's last bowl game was the Heart of Dallas Bowl in 2013.

"We've got another opportunity," Brohm said. "Next week is going to be another tough game against a good opponent on the road."

Northwestern: The Wildcats should be favored in their final two games (Minnesota and Illinois), meaning they have a good chance of amassing nine wins after starting the season 2-3. They also could break into the Top 25 for the first time this season.

Purdue: Visits No. 25 Iowa on Saturday.