Season over for Adam Vinatieri and Parris Campbell

Both Colts placed on injures reserve 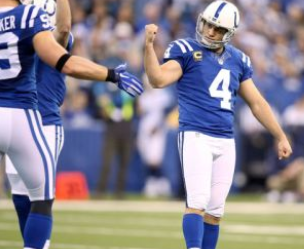 INDIANAPOLIS — A Colt whose career may have come to an end and a player who's just getting started were both placed on injured reserve, the team announced Monday.

That means the season is over for kicker Adam Vinatieri and receiver Parris Campbell.

At 46, Vinatieri is the NFL's oldest player and this season has been a struggle. His 2,673 points ranks first in league history, as does his 599 field goals made. Earlier in his career, Vinatieri made 44 consecutive field goals.

He did not play this past Sunday and was placed on injured reserve Monday with a knee injury. Rookie Chase McLaughlin played in place of Vinatieri.

Rookie Parris Campbell, came to the Colts from Ohio State. Hobbled by injuries this year, he made it into seven of the Colts 13 games. His best performance was last month against the Steelers, when he finished with 53 yards receiving. Now he's on injured reserve with a broken foot.