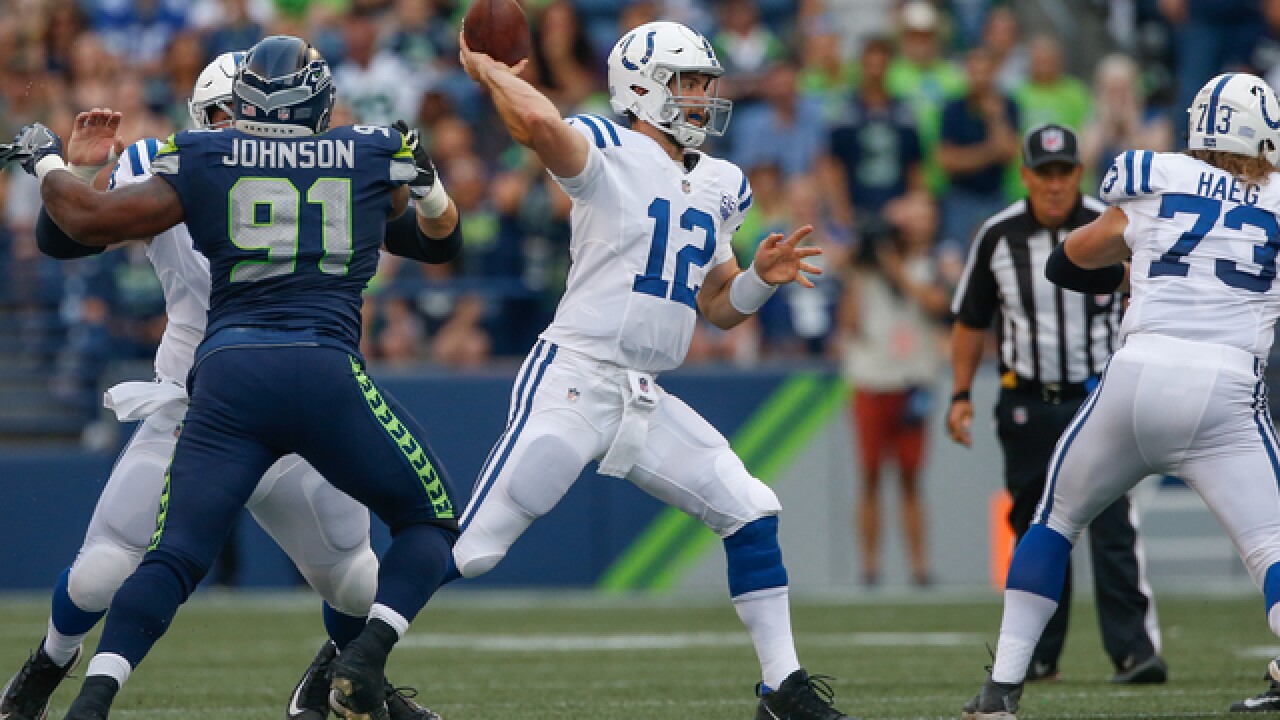 SEATTLE (AP) -- Andrew Luck could feel the pressure building as he prepared for his first game action with Indianapolis since the final week of the 2016 season.

When he let go of trying to contain his excitement, the pressure was released.

Luck was back under center, leading Indianapolis on a pair of field-goal drives in just over a quarter in the Colts' 19-17 victory over the Seattle Seahawks on Thursday night.

The reintroduction of Luck as the Colts' leader started with a 17-yard swing pass to Marlon Mack on the first play. It concluded early in the second quarter when his pass intended for T.Y. Hilton was broken up. In between, Luck was bear-hugged by Seattle All-Pro linebacker Bobby Wagner on a scramble run, sacked by Rasheem Green, and also showed flashes his surgically repaired right shoulder is ready to allow him to again be a premier quarterback.

Luck completed 6 of 9 passes for 64 yards, most of that coming on the opening drive when he hit 5 of 7. Luck completed passes to five receivers and threw from a clean pocket on most of his dropbacks, even with starting left tackle Anthony Castonzo not playing.

"He just kept saying how excited he was and right before he went out he said `There's a lot of emotions right now let's see if I can control them,"' Indianapolis coach Frank Reich said. "It was almost like he was saying, `I'm going to need to control how I'm feeling, because I'm pretty jacked up.' And he came out in the first drive and handled it like we expected."

Adam Vinatieri made field goals of 33, 51 and 45 yards in the first half, and Michael Badgley's 34-yarder late in the third quarter gave Indianapolis a 12-10 lead. Phillip Walker added a 10-yard TD pass to Darrell Daniels early in the fourth quarter.

Luck's counterpart from the 2012 draft, Russell Wilson, played one series for Seattle. Wilson was 4 of 5 for 43 yards and capped his only drive with a 5-yard touchdown pass to tight end Nick Vannett. It was Wilson's first action playing in the offense of new coordinator Brian Schottenheimer, which will be heavily tilted toward the run. Second-year running back Chris Carson averaged 6.5 yards per carry in limited action.

Seattle's defense scored with 3:15 left when an errant snap was recovered by Joey Ivie for a touchdown.

Three Seattle players ran into the team's locker room prior to the national anthem.

Defensive linemen Branden Jackson and Quinton Jefferson, and offensive lineman Duane Brown left the field following team introductions and before the start of the anthem. They returned to the sideline immediately after it concluded. All three were among a group of Seattle players that sat during the anthem last season.

Brown and Jefferson said they intend to continue the action all season.

"The team was aware of everyone's emotions and feelings going forward and we're all supportive of each other," Brown said.

There were no other actions by either Seattle or Indianapolis players during the performance of the anthem.

The most significant injury was Mack leaving late in the first quarter with a hamstring issue. Mack had four carries and two receptions in the first quarter. He wasn't likely to get much more action, but is still a concern going forward. Indianapolis coach Frank Reich didn't have any more of an update postgame.

Seattle backup offensive tackle Isaiah Battle limped off the field with a sprained knee in the third quarter, but Seattle coach Pete Carroll said it didn't appear severe. Battle had been gaining on Germain Ifedi for the starting right tackle spot. Rookie tackle Jamarco Jones also had to be carted off in the fourth quarter after injuring his left ankle. Carroll said X-rays were negative but it was a significant sprain.