Another one slips away. Bengals 24, Colts 23 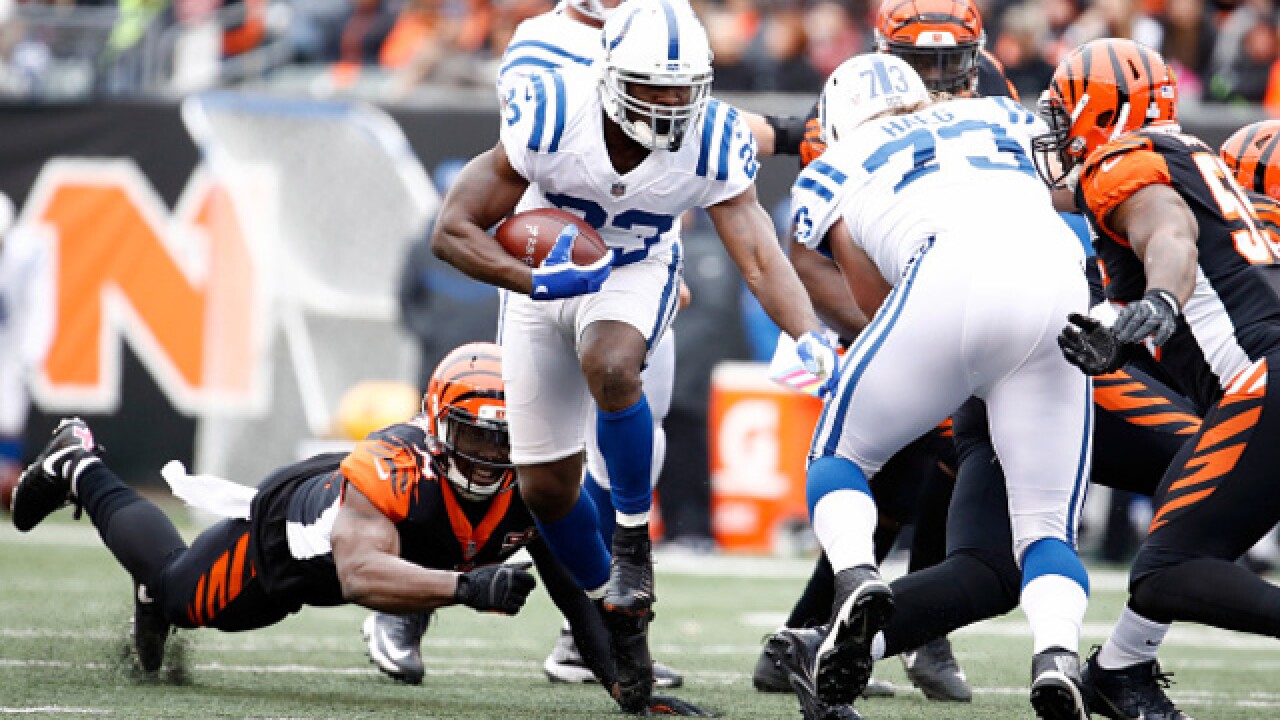 Copyright 2017 Scripps Media, Inc. All rights reserved. This material may not be published, broadcast, rewritten, or redistributed.
Andy Lyons
<p>CINCINNATI, OH - OCTOBER 29: Frank Gore #23 of the Indianapolis Colts runs with the ball against the Cincinnati Bengals at Paul Brown Stadium on October 29, 2017 in Cincinnati, Ohio. (Photo by Andy Lyons/Getty Images)</p>

CINCINNATI -- Lineman Carlos Dunlap batted Jacoby Brissett's pass into the air, grabbed the ball and ran 16 yards to the end zone for a game-turning touchdown Sunday, rallying the Cincinnati Bengals to a 24-23 victory over the Indianapolis Colts.

The defensive end excels at swatting away passes -- he led NFL linemen last season -- and changed the game with his third career score.

The Bengals (3-4) couldn't protect Andy Dalton or get much pressure on Jacoby Brissett, who was sacked 10 times during a 27-0 loss to Jacksonville the previous week -- the first time Indianapolis was blanked in 15 years.

Brissett's second touchdown pass had put the Colts (2-6) in position for a soothing road win.

Instead, Dunlap snatched it away with 6:58 left, putting Cincinnati ahead to stay in a game featuring four lead changes. The Colts drove to a fourth-and-4 at the Cincinnati 48-yard line, and Brissett was hit as he threw an incompletion with 1:18 to go.

Dalton was 17 of 29 for 243 yards with a pair of touchdowns. The Bengals' running game had little success against a defense that allowed the Jaguars to score on their first four possessions a week earlier, managing only 58 yards.

Colts tight end Jack Doyle had 12 catches for 121 yards, including a 13-yard touchdown. Brissett was 25 of 39 for 233 yards with the one pivotal interception and four sacks.

Adam Vinatieri kicked three field goals for the Colts and moved into a tie with Gary Anderson for second-most points in NFL history with 2,434.

Colts: Pierre Desir started at cornerback in place of Rashaan Melvin, who has a concussion.

Bengals: CB Adam "Pacman" Jones started after missing one game with a bad back. DL Michael Johnson hurt his back late in the first half and didn't return.

Colts: Indianapolis plays at Houston on Sunday. The Texans have won the past three in the series.

Bengals: Cincinnati plays at Jacksonville on Sunday. The Bengals have won the past four in the series, their most recent meeting in 2014.