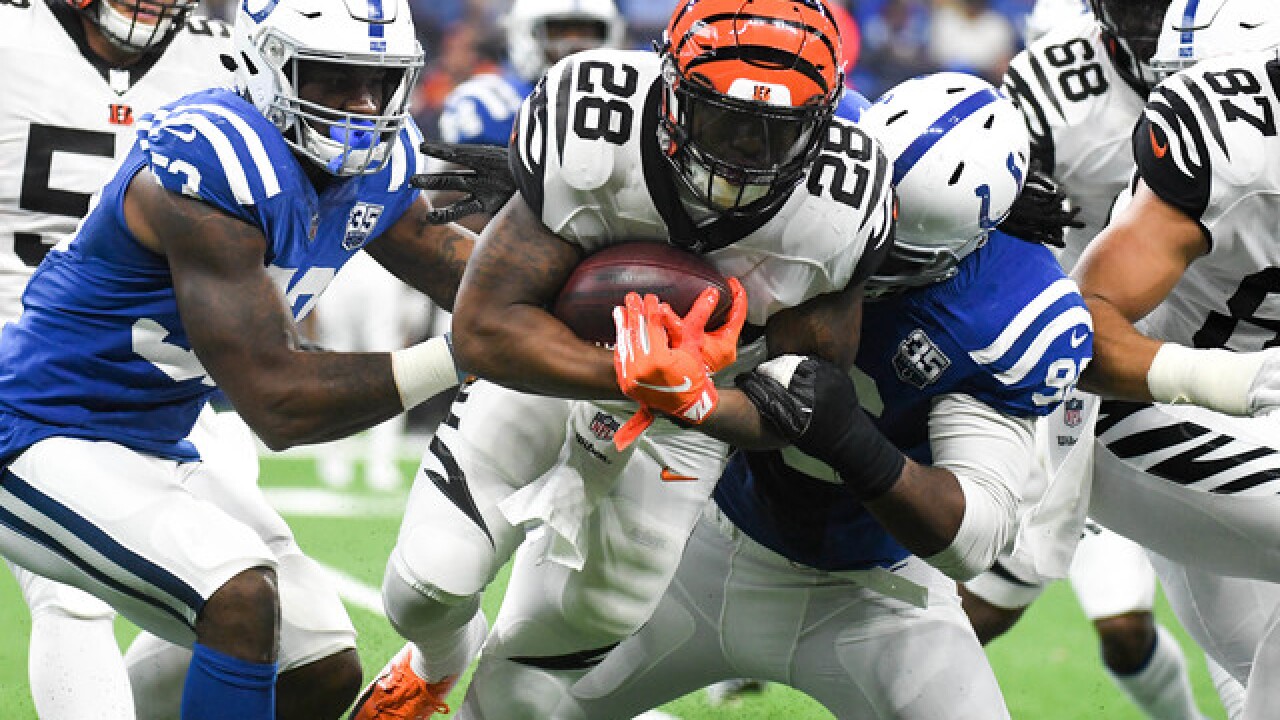 Image copyright 2018 Getty Images. All rights reserved. This material may not be published, broadcast, rewritten, or redistributed.
Bobby Ellis
<p>INDIANAPOLIS, IN - SEPTEMBER 09: Joe Mixon #28 of the Cincinnati Bengals runs the ball in the game against the Indianapolis Colts at Lucas Oil Stadium on September 9, 2018 in Indianapolis, Indiana. (Photo by Bobby Ellis/Getty Images)</p>

INDIANAPOLIS (AP) — Andy Dalton rallied the Cincinnati Bengals with three scores in the final 19 minutes Sunday and Clayton Fejedelem scored on an 83-yard fumble return with 24 seconds to go, giving the Bengals a 34-23 victory at Indianapolis.

The loss spoiled the Colts’ season opener — and the return of Andrew Luck, who made his first start in more than 20 months.

It looked as if Luck was up to his old tricks after staking the Colts to a 23-10 lead midway through the third quarter and again late when he led the Colts 50 yards to the Bengals 25-yard line in the final minute.

But after completing a pass on third down to Pro Bowl tight end Jack Doyle, who appeared to have the first down, Fejedelem knocked the ball out, scooped it up and sprinted down the sideline avoiding Luck on his way to the end zone for the sealing score.

A.J. Green had six catches for 92 yards, including a 38-yard TD catch in the third quarter.

Luck looked rusty initially with his first official pass since Jan. 1, 2017, being underthrown to Doyle and picked off by linebacker Preston Brown. But he wound up 39 of 53 with 319 yards with two touchdowns.

After Cincinnati took a 3-0 lead, Luck led the Colts 72 yards to set up Adam Vinatieri for the first of three first-half field goals. Luck’s perfect 26-yard TD pass to Eric Ebron made it 10-3 and when Vinatieri added a 38-yard field goal it was 13-3.

Luck hooked up with T.Y. Hilton for a nifty 5-yard score, fitting the ball into a tight window at the goal line to make it 23-10 midway through the third quarter.

But the Colts didn’t score again.

Dalton, meanwhile threw the TD pass to Green to cut the deficit to 23-17, Mixon’s scoring run made it 24-23 and Randy Bullock followed those scores with a 39-yard field goal.

Cincinnati safety Shawn Williams was ejected in the first quarter after helmet-to-helmet contact with Luck — becoming the first player to be ejected this season.