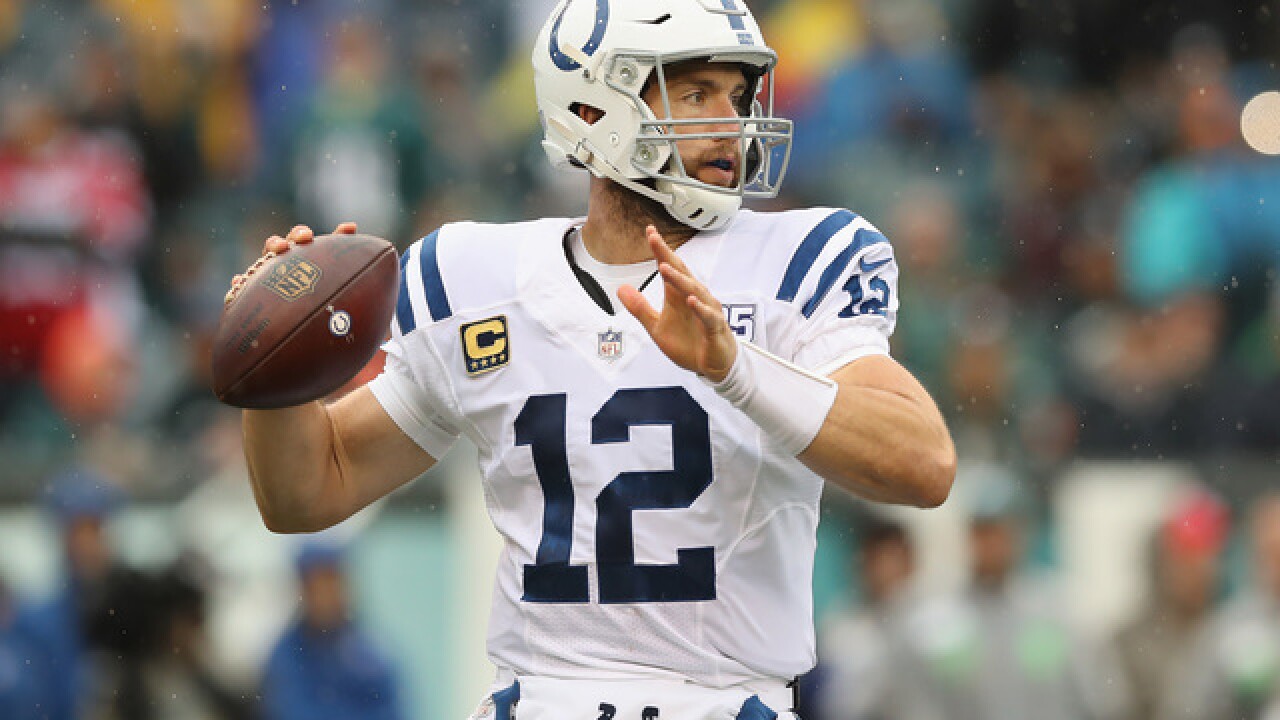 And it’s something the Colts know must change if they intend to keep Luck on the field for the final 11 games.

“I think for us a big part of it is we need more success early,” said coach Frank Reich, a former NFL quarterback.

“Let’s not get behind, let’s play good, sound football, let’s not beat ourselves in all three phases. Let’s stay in the game, don’t get behind, stay patient with the runs and then have some success early with the run game that gives you the confidence to keep going back to it.”

Luck had to throw on nearly every play after the Colts fell into an 18-point, third-quarter deficit against the Texans. He led the Colts to a late, tying score that forced overtime before Indy lost 37-34.

On Thursday, Luck helped Indy cut a 21-point halftime deficit to seven in the fourth quarter before losing 38-24 at New England.

It’s been a recurring theme this season.

Luck also had the Colts (1-4) in position for go-ahead touchdowns in the final two minutes against Cincinnati in the season opener and at Philadelphia in Week 3, only to come up short both times.

But the expanded workload has shown up in the numbers.

Luck’s 245 attempts through five games lead the league and have him on pace to throw 784 times this season, a number that would shatter Matthew Stafford’s single-season record of 727 from 2012.

In the past two games, Luck broke the franchise’s single-game record with 62 attempts against Houston and matched Jeff George’s previous mark (59) against the Patriots.

So far, Luck’s arm seems to be just fine.

“Physically, I feel better and better,” he said Wednesday. “I think there’s been a concerted effort in this locker room so guys continue to progress physically, stay strong, keep getting strong and not to plateau. I subscribe to that theory and I think it’s paying off in the recovery from games, the recovery from throwing a bunch of throws and I’m excited to keep rolling.”

Starting running back Marlon Mack missed four of the first five games with a hamstring injury. He hopes to return Sunday against the New York Jets (2-3).

Indy’s starting offensive line also has been in flux. Left tackle Anthony Castonzo (hamstring) might make his season debut this weekend and the Colts already have used four different starters at right tackle.

The good news is Denzelle Good returned to practice Wednesday after missing the last week following the death of his brother, Overton, in a drive-by shooting in South Carolina and could return Sunday.

But right guard Matt Slauson, who started each of Indy’s first five games, will miss the rest of the season after breaking two vertebrae against New England. Rookie Braden Smith, who started last week at right tackle, could return to his more natural spot on the interior line in Slauson’s absence.

“There are a couple of different options we’re looking at and obviously we’re pretty geared into it,” Reich said. “We’ll evaluate that over the next few days.”

But through it all, Luck has provided stability and continuity with an arm that appears to be getting stronger by the week.

“You have that weekend off, which is sort of nice especially in the one sense if you win — not so much if you lose,” he said. “We have to run the ball a little more effectively to give ourselves a consistent chance to win.