Colts' 11-game streak against Titans on line in prime time 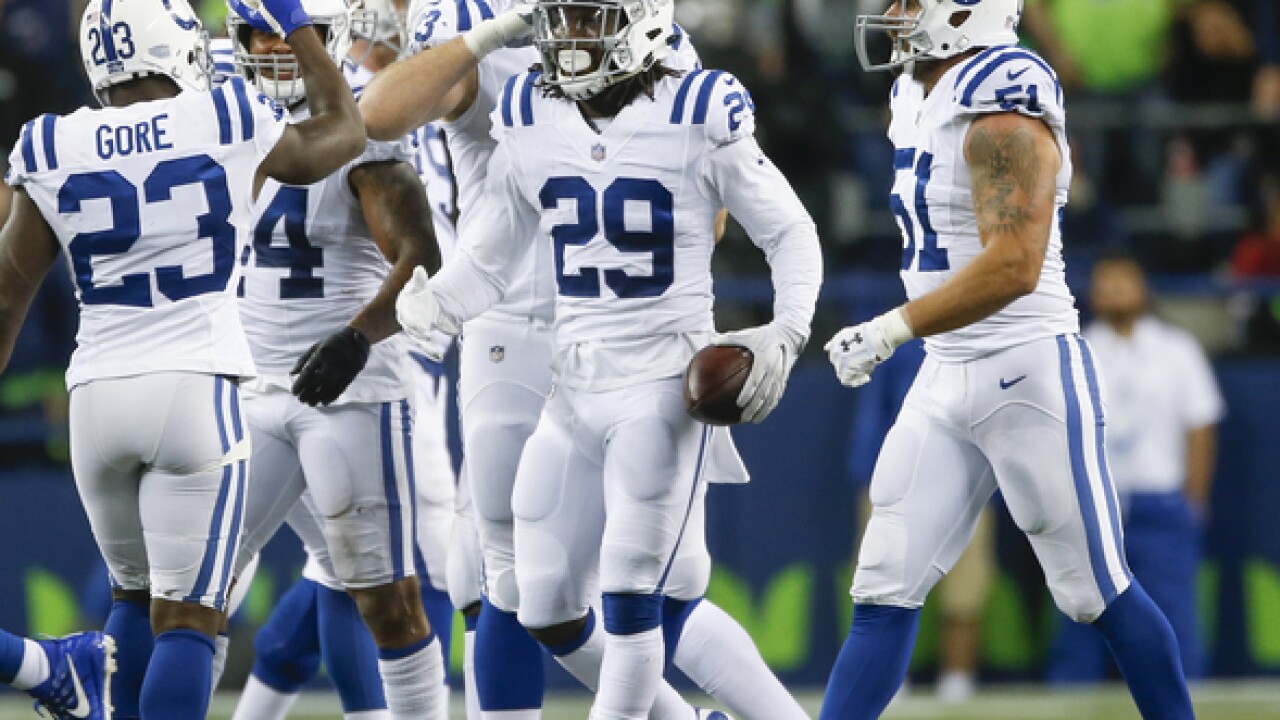 Copyright 2017 Scripps Media, Inc. All rights reserved. This material may not be published, broadcast, rewritten, or redistributed.
Otto Greule Jr
<p>SEATTLE, WA - OCTOBER 1: Malik Hooker #29 of the Indianapolis Colts celebrates his interception of Quarterback Russell Wilson #3 of the Seattle Seahawks in the third quarter of the game at CenturyLink Field on October 1, 2017 in Seattle, Washington. (Photo by Otto Greule Jr/Getty Images)</p>

NASHVILLE, Tenn. (AP) -- No matter the coaches, the players or even the city, one thing remains unchanged when the Indianapolis Colts play the Tennessee Titans.

Even in Peyton Manning's final season in Indy, when he was sidelined by injury, the Colts found a way to start this streak with their first win in 2011. Indianapolis now has won 11 straight and 16 of the last 17 against the Titans, a stranglehold tied with Denver's string over Cleveland for the NFL's longest streak against one team, according to Elias Sports Bureau.

Colts coach Chuck Pagano will try to extend his franchise's mastery over the AFC South rivals on Monday night with Jacoby Brissett the latest quarterback to fill in for Andrew Luck. Pagano insists history means nothing.

"Pay no attention to that stuff, it has really no relevance on this game," Pagano said.

His Colts (2-3) are trying to climb their way out of the AFC South cellar and prove they can beat a team that has beaten someone this season. Indianapolis needed overtime last week to edge winless San Francisco 26-23 .

The Titans (2-3) have lost two straight are coming off a 16-10 loss in Miami with quarterback Marcus Mariota sidelined by a strained hamstring. Mariota's status for Monday night, along with the skid are, the two questions coach Mike Mularkey and his Titans have heard the most.

"We all have had our pieces of it," Mularkey said. "We're aware of it. Those things come to an end at some point, that's a fact."

Here are some things to know about the Colts and Titans:

PRIMETIME FLOPS: There was a time the Colts were prime-time gold. Television ratings would jump and Manning usually delivered wins. That's certainly not been the case lately. Indy has lost six of its past seven night games and is  2-8 in its last 10 prime-time appearances. It's not just the losses that have looked bad -- it's the way the Colts lost.

Five of those eight have come by double digits and three of the past four have been by 21 or more points.

The Titans have been relegated to Thursday nights for their prime-time slots the past three seasons -- all against Jacksonville. They haven't been much better than the Colts, losing four straight before beating the Jaguars 36-22 last year in Nashville.

THE QUARTERBACKS: The Colts already have declared Luck out of his sixth game this season. The Titans are hoping Mariota's hamstring continues improving enough for him to play Monday night. His replacement, Matt Cassel, was sacked six times last week and had a fumble returned for a touchdown. Mariota said he "absolutely" feels good about his chances of playing .

BIG MACK ATTACK: As Frank Gore continues to climb the NFL's rushing charts, the Colts find themselves trying to give rookie running back Marlon Mack a bigger workload. Mack had 16 carries for 21 yards in the Colts' first two games before hurting his shoulder and missing the next two with the injury.

When he returned last Sunday, Mack looked like his old self, running nine times for 91 yards, scoring on a 22-yard run and having a second TD run ruled down at the 1-yard line following a replay review. If Mack stays healthy, he could get even more chances against the Titans' No. 18-ranked defense.

"I think it'd be wise to try to find ways to get him the football and get him more involved," Pagano said. "I think that would've happened by itself had he been available the entire time. But it's good to have him back."

TIME TO RUN: The Titans want to get back to running the ball to jump-start an offense that has sputtered too much this season. DeMarco Murray has been at his best against divisional opponents, when he has averaged 71.9 yards rushing with 16 TDs in 32 such games since entering the NFL in 2011. He ran for 107 yards against the Colts in Nashville last season.

KICKER SHOWCASE: The ageless Adam Vinatieri just kicked his 24th game-winning field goal in either the final minute of the fourth quarter or overtime for the Colts, an NFL record for the league's oldest player (44).

Titans kicker Ryan Succop tied the NFL record last week with his 46th consecutive field goal inside 50 yards, and he needs one more to take the record, shared with Atlanta's Matt Bryant, for himself.

Tune into RTV6 Monday night to watch the Colts take on the Tennessee Titans!

Take a look below for an updated RTV6 programming schedule: