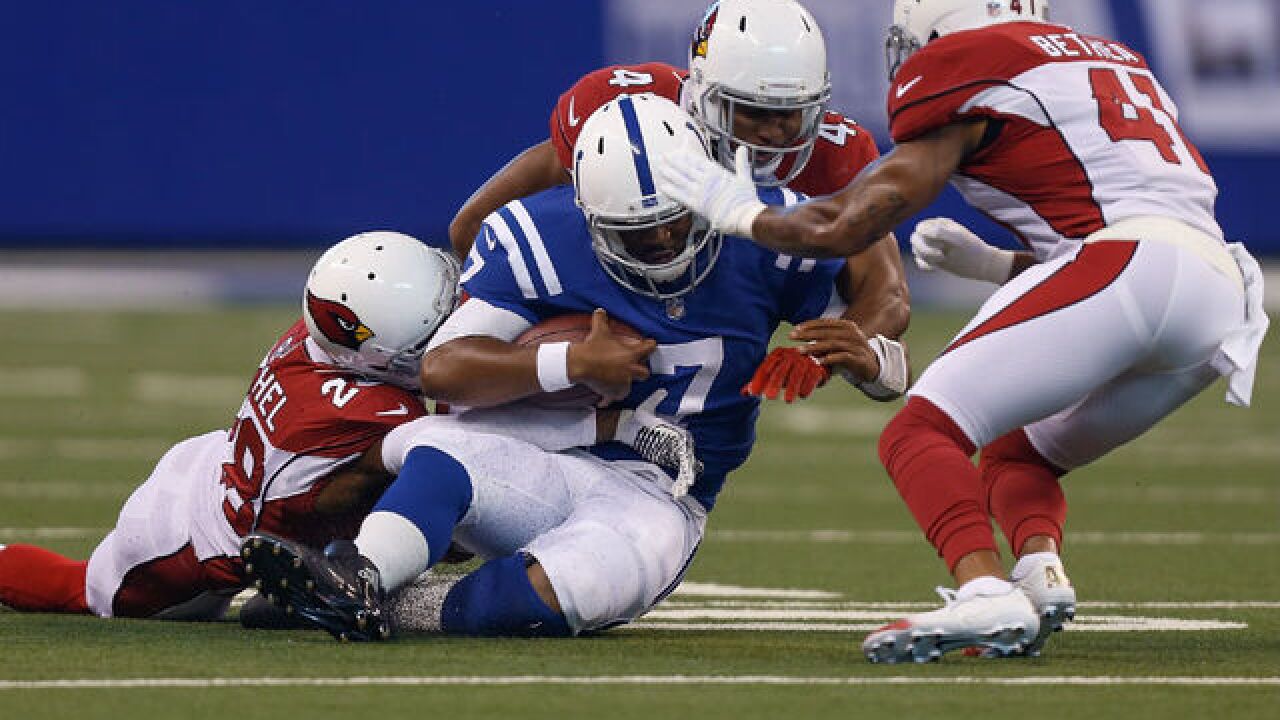 The ability to move beyond past mistakes is essential to future success.

Butler learned that lesson the hard way while playing cornerback and now that he's changed positions, Butler wants his younger teammates to understand how it pertains to the big picture: avoiding a 0-3 start.

"It felt like last year was a must-win game in September, and it feels almost the same way this week," Butler said Monday after going 0-2 for the fifth time since 2011. "We've got to find a way to win."

If not, the numbers suggest Indy's playoff hopes could end quicker than anyone expected.

Since the postseason field expanded to 12 teams in 1990, roughly 12 percent of those making the playoffs were 0-2 including Butler's 2014 Colts.

Another loss this weekend against winless Cleveland could be far more troubling.

Even the odds-makers won't bet on Indy.  Cleveland opened as a 2-point favorite, the first time in five years the Browns have been favored on the road.

Butler, who is dealing with a hamstring injury, and his teammates, of course, are paying about as much attention to historical references and betting lines as they are to the 46-9 season-opening loss that dropped them almost to the bottom of the power rankings.

"We definitely showed some improvement in getting after the quarterback and stopping the run," defensive tackle Johnathan Hankins said. "We've got to keep the momentum going and find a way to get a win."

The Colts were better Sunday against Arizona than they were in the Rams' rout.

But how could they not be?

New quarterback Jacoby Brissett gave Indy's offense an early spark by converting three straight third downs and leading the Colts to 10 points on their first two drives. The defense finished with four sacks, picked off one pass and limited the Cardinals to 83 yards rushing on 25 attempts.

But instead of sealing what looked like a sure win, Indy allowed the Cardinals (1-1) to rally from a 10-point deficit in the final eight minutes, then gave Arizona two chances to win it with a field goal.

Phil Dawson missed the first, wide right as time expired in regulation, before taking advantage of Brissett's interception on the first play from scrimmage in overtime. Now the Colts find themselves trying to dig out of a 0-2 hole for the fourth straight season.

"At the end of the game, we had a chance to close it out and we didn't," linebacker Jabaal Sheard said. "That's what we've got to do this week."

The Colts' predicament may be less bleak than it appears.

Indy's best defensive player, cornerback Vontae Davis (groin), and starting center Ryan Kelly (broken foot) could be on the verge of returning. Davis did some light work late last week and Kelly has been walking around the team complex without a boot or a limp.

Coach Chuck Pagano said both were "getting closer."

Franchise quarterback Andrew Luck still has not practiced since having January surgery on his throwing shoulder, but presumably expects to return before the midway point of the season. Otherwise, the Colts probably would have kept him on the physically unable to perform list.

Luck was ruled out of the Cleveland game and Pagano said Luck still needs to be cleared by team doctors before he can practice.

Plus, Indy plays in the AFC South, a division that has produced champions in two of the last three years that started 0-2.

But even Butler realizes the only real remedy is to start winning.