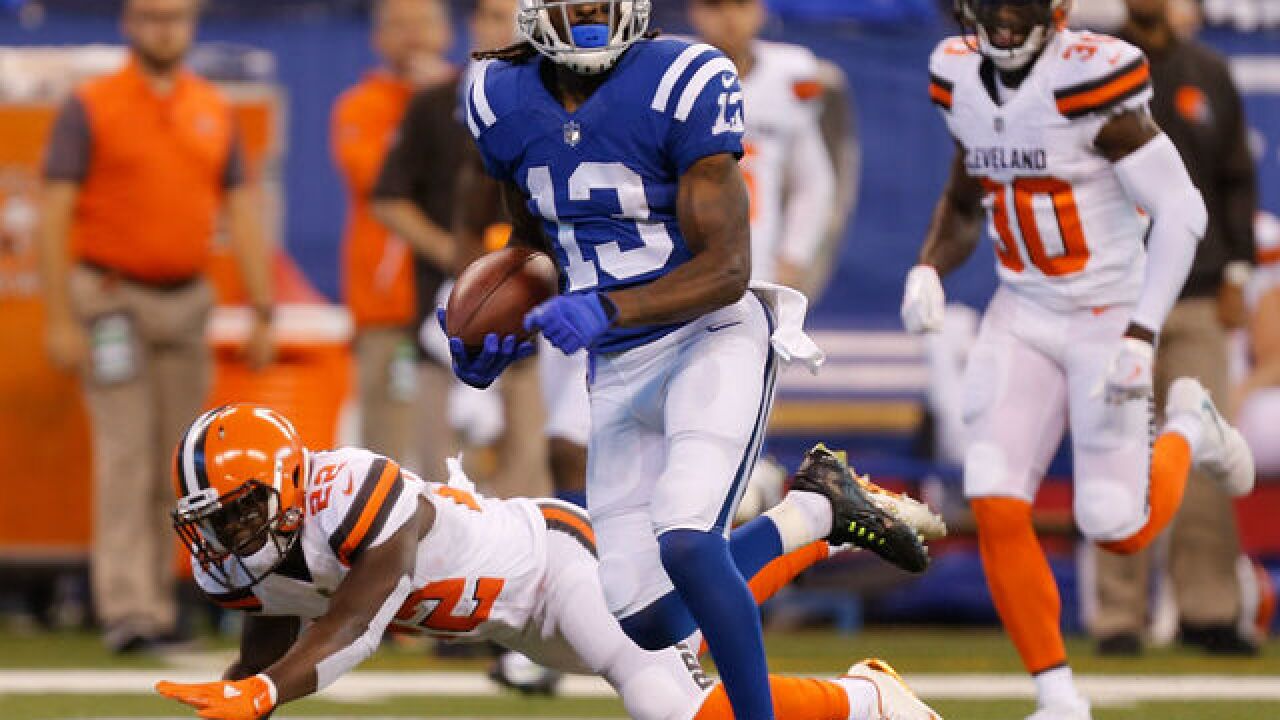 Image copyright 2017 Getty Images. All rights reserved. This material may not be published, broadcast, rewritten, or redistributed.
<p>INDIANAPOLIS, IN - SEPTEMBER 24: T.Y. Hilton #13 of the Indianapolis Colts runs for a touchdown after a catch against the Cleveland Browns during the first half at Lucas Oil Stadium on September 24, 2017 in Indianapolis, Indiana. (Photo by Michael Reaves/Getty Images)</p>

INDIANAPOLIS (AP) —The Colts beat the Browns 31-28 on Sunday at the Lucas Oil Stadium.

They, like the Browns, will start a young quarterback who is still getting acclimated to a new system.

They, like the Browns, are still trying to work out the kinks in a revamped defense.

And they, like the Browns, need some new, young to make an immediate impact.

By virtually any measure, from the winless records down to the injured No. 1 overall draft picks, these teams head into Sunday’s showdown looking like replicas.

The biggest difference is how the teams reached this point.

This year’s roster has 33 players with less than two seasons of NFL experience, a list that includes rookie quarterback DeShone Kizer , who has thrown one touchdown pass and four interceptions since beating out three veterans for the starting job.

Wholesale changes have become the norm in Cleveland.

For Indy (0-2) this is unfamiliar territory.

While the Colts have missed the playoffs each of the past two seasons, they’ve compiled just one losing record since 2002 and have only one 0-3 start since 1999.

But franchise quarterback Andrew Luck hasn’t even practiced since undergoing surgery on his throwing shoulder in January and the Colts haven’t looked the same.

Scott Tolzien’s tenure as the starter lasted one week, and recently acquired Jacoby Brissett’s interception in overtime last week led to another loss. Brissett is expected to make his second straight start this weekend.

What coach Chuck Pagano likes is that the run defense has held up well through two weeks and as the Colts continue to wait for two-time Pro Bowl cornerback Vontae Davis return from an injured groin, three rookies have played reasonably well in the secondary.

The next step Sunday, for both teams, is to become more consistent — and get a win.

“We all understand the magnitude of it and the urgency,” Colts coach Chuck Pagano said. “They need a win, and we need a win.”

Here are some other things to watch:

TALENTED SIDELINE: Luck might not be the only former No. 1 draft pick out this week.

The top selection in the 2012 draft could be joined by Browns defensive lineman Myles Garrett, the No. 1 pick in April. Garrett has been battling a high ankle sprain since early September and, like Luck, has yet to play this season.

WAY-WAY BACK: Browns rookie safety Jabrill Peppers is playing so deep in coverage it looks like he’s returning a punt on every play.

Defensive coordinator Gregg Williams has Peppers lining up 25 yards off the line of scrimmage to deter teams from throwing deep. The strategy has been most effective, though the Ravens threw in the underneath gaps last week. Peppers must also resist the temptation to move closer to make plays.

“You have to be disciplined,” said Peppers, who is known as a ballhawk. “At this level, you have to trust that everybody is going to do their job. We all trust each other and the job will get done.”

Pagano said Cleveland’s use of Peppers reminds him of how All-Pro safety Ed Reed was used in Baltimore, where Pagano once served as defensive coordinator.

“He just sat back there and read the quarterback,” Pagano said. “I fully understand why they (the Browns) are doing what they do, and they do it extremely well.”

TREND LINE: Sunday’s winner might eventually be able to climb back into playoff contention. The loser will have a much tougher road back.

PREFERRED CHOICE: At least the bookies like the Browns.

For the first time since 2015, Cleveland opened as the favorite in Las Vegas. The Browns hadn’t been favored to win since their 13th game in ’15, when they beat San Francisco 24-10, and haven’t been favored on the road since covering a 1-point spread with a 20-17 win at Oakland in 2012.