Colts counting on healthy Luck to turn around fortunes 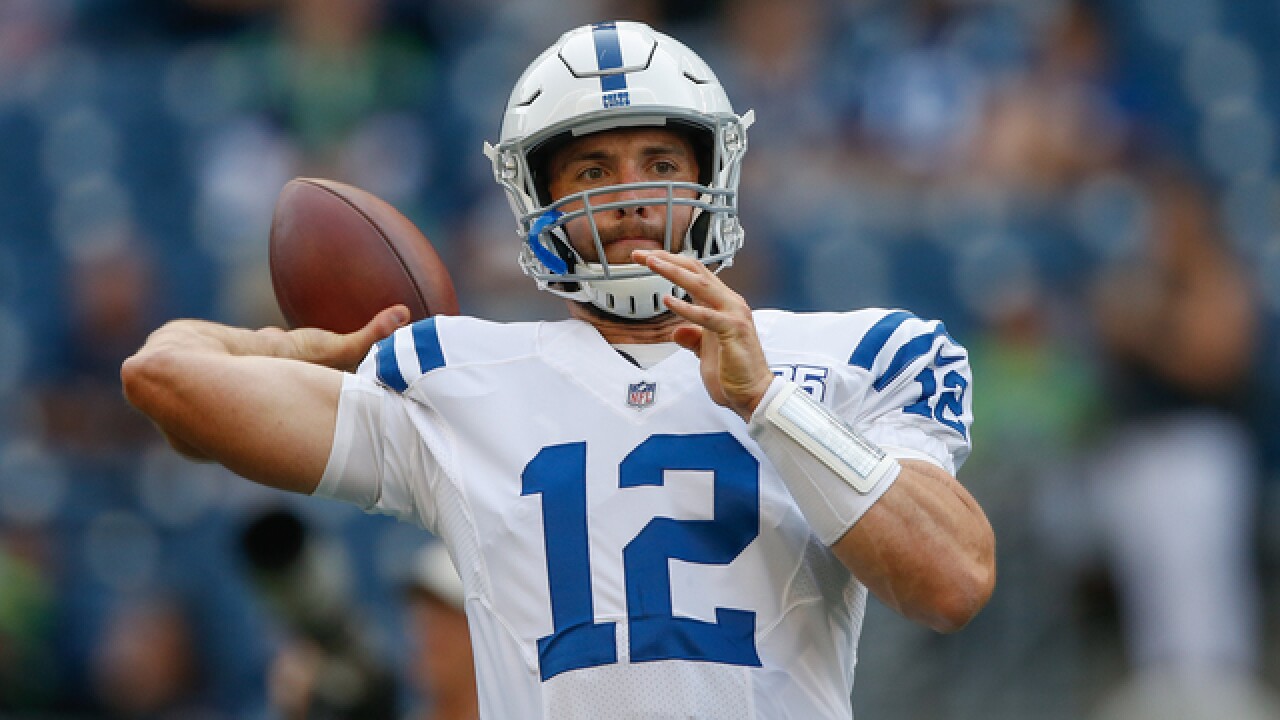 Copyright 2018 Scripps Media, Inc. All rights reserved. This material may not be published, broadcast, rewritten, or redistributed.
Otto Greule Jr
<p>SEATTLE, WA - AUGUST 09: Quarterback Andrew Luck #12 of the Indianapolis Colts warms up prior to the game against the Seattle Seahawks at CenturyLink Field on August 9, 2018 in Seattle, Washington. (Photo by Otto Greule Jr/Getty Images)</p>

He’s thrown a touchdown pass, celebrated a couple of victories, mastered another new offense and even survived some hard hits.

Yes, the Indianapolis Colts’ returning and improved quarterback already seems to be rounding into his pre-injury form — good news for a team that desperately needs Luck available to turn things around after missing the playoffs each of the last three years.

“My arm feels awesome,” he said after celebrating Indy’s second preseason win. “I’m not going to lie to you guys. I actually feel very good and strong. My shoulder felt alive.”

Sure, the critics contend they heard some positive vibes last year. Of course, back then, Luck wasn’t even throwing a football. And, yes, now he is dealing with a minor foot injury.

But this time, he’s already survived three games and looks more like the quarterback that led Indianapolis to playoff appearances in his first three seasons than the guy who missed 26 of the last 45 games with injuries.

Nobody is less surprised to see Luck ready to go than first-year coach Frank Reich, who believed so strongly in the comeback he never asked general manager Chris Ballard for Luck’s medical update before accepting the job in February.

“Physically he can take the hit, presence in the pocket, command at the line of scrimmage, accuracy,” Reich said when asked what Luck had demonstrated in 11 preseason series. “I think he threw the ball really well. I just felt like he was in complete control.”

With Luck’s preseason complete, the next big test comes Sept. 9 against Cincinnati. It will be his first regular-season game in more than 20 months, and though he’s already been driven into the ground by Terrell Suggs and others, the Colts’ success this season will likely depend more on how well Luck’s surgically repaired throwing shoulder holds up through a 16-game season.

“There are still things that come up that are going to be challenges,” he said. “I know I’ve seen improvement. I think this team has improved, so that to me is the most important thing.”

FOR THE RECORD: Adam Vinatieri’s resume makes a solid case that he’s the best kicker in league history. As the 45-year-old enters his 23rd season, Vinatieri has his eyes on bigger feats.

He needs seven field goals to pass Morten Andersen (565) for the most in league history. And if Vinatieri produces at his typical pace, he could also beak Andersen’s career scoring record sometime in October.

PLUGGING HOLES: The Colts put a premium on the offensive line and seem to have solidified at least four spots, presuming longtime starting left tackle Anthony Castonzo returns from a hamstring injury for the season opener.

Ryan Kelly, Indy’s 2016 first-round pick, returns from injury to start at center. He’ll be flanked by veteran guard Matt Slauson, added as a free agent, on the right side, and first-round pick Quenton Nelson on the left.

If the early returns are any indication, it will be the best interior line Luck has played with since being drafted in 2012.

At 6-foot-2, 220 pounds, Geathers is a big hitter from a football family that has already produced five NFL-playing relatives. Hooker, at 6-1, 212, is a playmaker with a penchant for takeaways.

But until Saturday, injuries had prevented Geathers and Hooker from lining up together in a game. If they stay healthy, they could finally give the Colts’ secondary the physical presence with big-play potential they’ve long sought.

TRENDING YOUNG: The Colts have drafted 19 players since Chris Ballard took over as general manager, and they’re counting on many of those youngsters to produce this season.