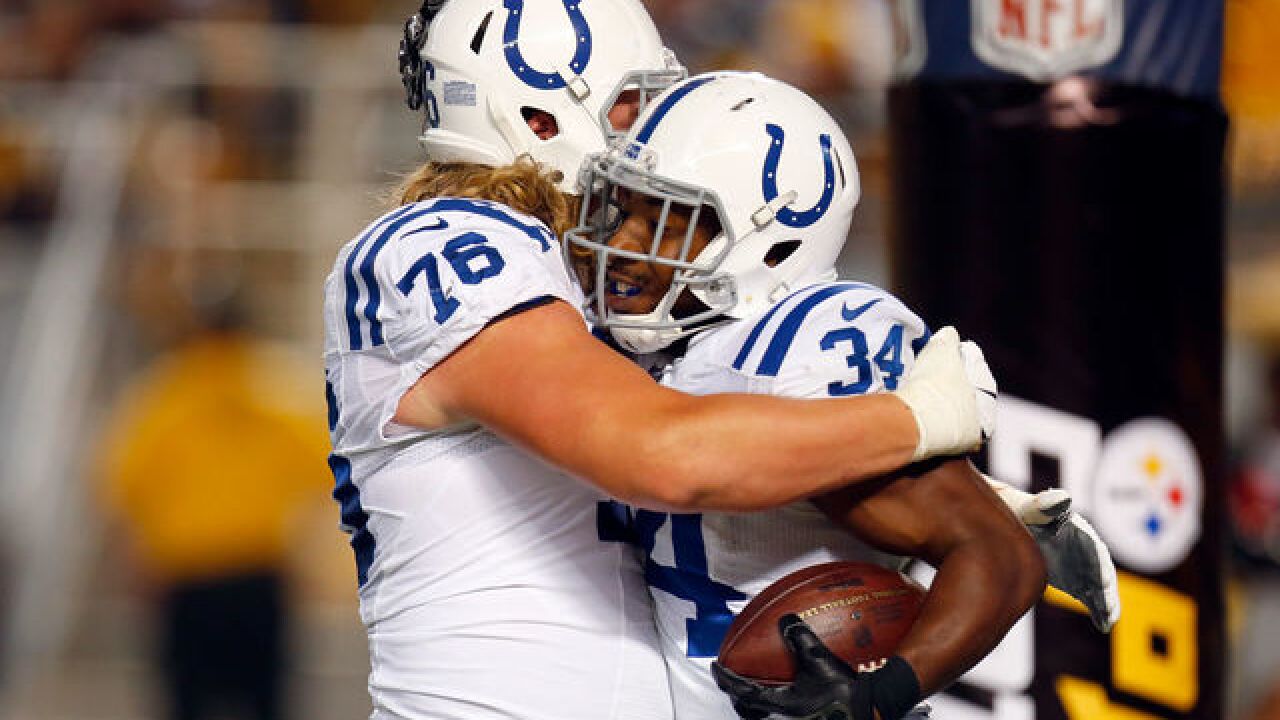 Copyright 2017 Scripps Media, Inc. All rights reserved. This material may not be published, broadcast, rewritten, or redistributed.
Justin K. Aller

Tolzien may have provided just enough breathing room to get the nod in a 19-15 victory over the Pittsburgh Steelers on Saturday night.

Tolzien led a pair of long scoring drives while completing 7 of 10 passes for 123 yards against Pittsburgh's first-team defense. Morris finished 12 of 16 for 143 yards after coming in, mostly against the backups.

Which was something Tolzien and the rest of the first-team offense needed to do following ineffective play last week against Dallas. He hit Donte Moncrief for a 55-yard gain on the Colts' first snap, setting up a 1-yard Frank Gore touchdown run. Tolzien also threw an interception in three series of work.

"There's going to be times when you're not clicking or not starting games fast," Tolzien said. "You can't let that keep you down. If you do that, you'll just bury yourself. It's good that we had a better start tonight."

Morris again had the better overall numbers, going 12 of 16 for 143 yards. Like Tolzien, Morris guided Indianapolis to a pair of scores. Indianapolis converted 5 of 11 third downs, a marked improvement after going 5 for 30 on third down.

Steelers quarterback Ben Roethlisberger said he was "ready for the regular season" after working a pair of series in his lone exhibition appearance. Roethlisberger completed 6 of 9 passes for 73 yards but also fumbled while getting sacked by linebacker John Simon to end Pittsburgh's first drive. Pittsburgh settled for Chris Boswell's 36-yard field goal on their second series when the offense bogged down inside the Indianapolis 20.

"We'd like to put seven points on the board both times, but it was good," Roethlisberger said. "We got done what we wanted to accomplish."

Wide receiver Antonio Brown caught two passes for 28 yards, including a twisting over-the-middle grab. Like Roethlisberger he took the night off after the second series, spending a portion of the down time running 40-yard dashes during timeouts.

Roethlisberger and Brown's roles are assured when the Steelers open the 2017 season in Cleveland in two weeks, a common thread for a team expected to challenge for a Super Bowl berth. The same can't be said for Indianapolis, which could start the season in flux without Luck, whose right shoulder has been slow to mend from offseason surgery.

Steelers backup Landry Jones completed 21 of31 passes for 163 yards after sitting out the first two games with an abdominal injury. Jones hit tight end Xavier Grimble for a 10-yard score in the third quarter, but was intercepted in the end zone with less than five minutes to go and Pittsburgh trailing.

The fight to be RB Le'Veon Bell's backup whenever he signs his franchise tender is tightening for Pittsburgh. Rookie James Conner ran for 26 yards on four carries. Former Kansas City Chief Knile Davis finished with 21 yards on seven carries and also caught a pass for 9 yards. Terrell Watson ran for a team-high 40 yards on eight carries.

Steelers: WR JuJu Smith-Schuster left briefly in the first half with a left leg issue but returned to catch three passes for 31 yards. ... S Cameron Sutton made his first appearance in a preseason game and finished with three tackles and a pass breakup.

Colts: CB Vontae Davis exited with a groin injury in the first half and did not return.

Steelers: RB Fitzgerald Toussaint, losing ground in the scramble behind Bell, left with an unspecified left leg injury and did not return.