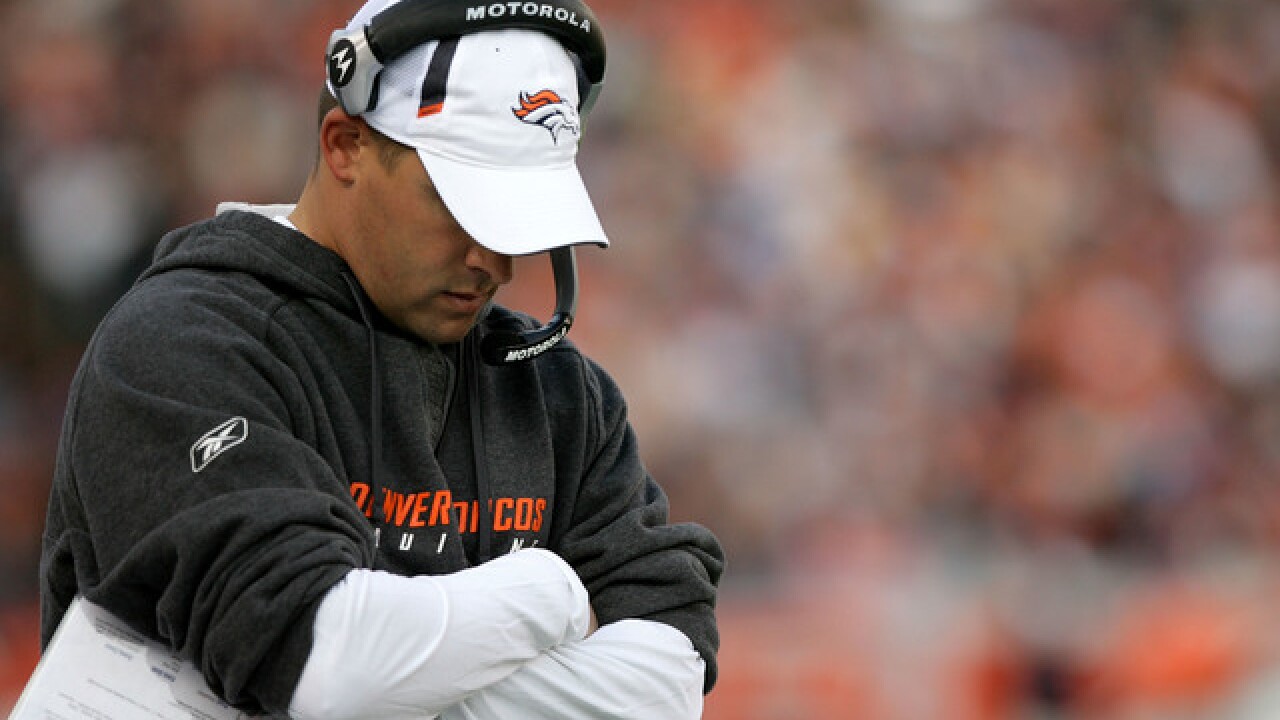 Copyright 2018 Scripps Media, Inc. All rights reserved. This material may not be published, broadcast, rewritten, or redistributed.
Doug Pensinger
<p>DENVER - NOVEMBER 22: Head coach Josh McDaniels of the Denver Broncos paces the sideline as he leads his team against the San Diego Chargers during NFL action at Invesco Field at Mile High on November 22, 2009 in Denver, Colorado. (Photo by Doug Pensinger/Getty Images)</p>

That was a word thrown around a lot Tuesday evening after the news broke that Josh McDaniels wouldn't be coming to Indianapolis after all.

But was it really such a shock?

Maybe. Reports began during the Super Bowl on Sunday that McDaniels could end up turning his back on the Colts and return to New England.

PREVIOUS | Report: Josh McDaniels may not leave Patriots for Colts after all

Either way, Colts fans had a lot to say about McDaniels after he decided to backstab the Colts. And after general manager Chris Ballard ended Wednesday's press conference by saying, "The rivalry is back on."

Trust us, you don't want to spurn a Colts fan. Especially when they're hyped about GM Chris Ballard.

Check out some of their reactions below.

Yooooooo Chris Ballard said “the rivalry is back on” before walking out of his press conference. pic.twitter.com/yR1TsX393m

Major credit to Ballard for taking questions for nearly 30 minutes.

Was poised, took the high road.

Ends with: “The rivalry is back on."

Chris Ballard with the greatest line in Indianapolis #Colts history.

"The rivalry is back on." 😈 pic.twitter.com/2JmPmlXQEZ

Chris Ballard is awesome. Handled that as well as anyone could. And then as he walks off says, "the rivalry is back on." I love pissed off Ballard. Still respectful, but he's fired up.

The #Colts play in New England next year...in case you were wondering.

Chris Ballard wrapped up the presser by saying “The rivalry is back on.”

Josh McDaniels: Can’t get fired from a job you don’t take pic.twitter.com/oqKy8G0EsU

Hey Colts, give me a few hours to put together a résumé. I don’t need a big contract, just want to bring my own staff

I swear Josh McDaniels saw Andrew Luck throwing the Football and went like this 😂😂😂😂😂😂😂😂 pic.twitter.com/eETLdwQLzC

I am glad Josh McDaniels has backed out of the Colts head coaching job. I have consistently told people when asked it to not trust fruit from the Patriots tree because it is mostly poison.

Unlike Josh McDaniels, we stay true to our commitments. Noblesville street crews will be out tonight once winter weather hits you can 'do your job' tomorrow. pic.twitter.com/6bKWmowPhH

Guess he couldn't wear his seat belt or follow traffic laws, nor keeps his word like Hoosiers do. Glad he didn't put on any @colts gear. https://t.co/aErQno19Sc

Josh McDaniels proving that what they say is true. there is NO honor among thieves

I’ll go to my grave saying Bill Belichick sent Josh McDaniels to sabotage the Broncos. He ran their QB and WR out of town, got off to a 6-0 start just to tease us, then had his own little spygate episode to take pressure off his old boss. He was just a spy https://t.co/c1Zsbrlp6n

It looks bad to me that Josh McDaniels backs out of coaching the Colts citing not wanting to move his family, yet apparently cared a lot less about his assistants already leaving their jobs and moving their families to coach with him in Indianapolis. I hope that’s not true.

If Josh McDaniels is willing to back out of a contract agreement, I don’t want him coaching my team. Move on, find someone with better character who will be a good coach for the Colts.

Which Joshs betrayal was worse, Josh from The Office or Josh McDaniels with the Colts? pic.twitter.com/BxAkYB0QUa