Colts lose in overtime to the Bills, 7-13 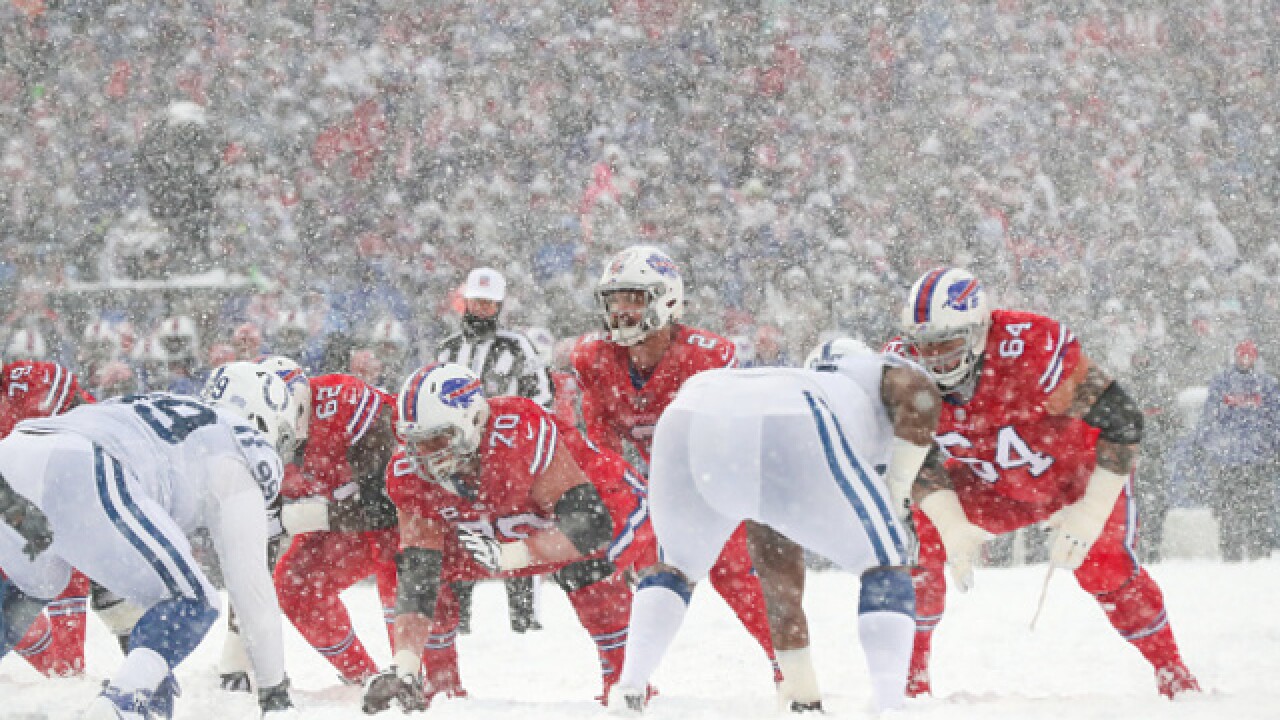 ORCHARD PARK, N.Y. -- LeSean McCoy scored on a 21-yard run with 1:33 left in overtime to secure the Buffalo Bills’ 13-7 win over the Indianapolis Colts in a wintry, white-out setting best suited for snow shoes and sled dogs.

McCoy finished with 156 yards rushing and topped the 1,000-yard mark for the sixth time in his career on a slick, snow-covered field.

The Bills’ sideline erupted after McCoy’s touchdown, with numerous players running on to the field to either make snow angels or engage in celebratory snowball fights.

Buffalo (7-6) stayed alive in the AFC playoff picture, while the Colts (3-10) were mathematically eliminated from playoff contention.

The game began in nearly white-out conditions with a major lake-effect storm blowing in off nearby Lake Erie. The snow fell so hard a half-hour before kickoff it was nearly impossible to see New Era Field’s west-end scoreboard from the east-end stands.

PHOTOS | Let it snow in Buffalo!

McCoy’s touchdown came on Buffalo’s second possession of overtime. Facing third-and-2, McCoy found a crease up the middle and had enough footing to cut to his left and scamper into the end zone untouched.

It was a topsy-turvy game played in a snow-globe setting, with a regular parade of work crews taking the field with snow blowers on their backs to clear the yard lines.

Early in the third quarter, fans were even treated to a rare metrological event of “thunder snow,” as lightning flashed over the stadium. The game was not stopped.

So much snow accumulated on the roof of the first-level suites that fans began building snowmen.

Colts receiver Chester Rogers disappeared into a snowbank in the end zone after being unable to stop on a deep pass from Jacoby Brissett. Rogers made the catch, but couldn’t keep both feet inbounds.

Injuries became an issue for Buffalo, with rookie quarterback Nathan Peterman leaving in the third quarter to be evaluated for a head injury. Peterman was starting in place of Tyrod Taylor, who was sidelined by a bruised left knee.

The Bills scored first on Peterman’s 8-yard pass to Kelvin Benjamin in the final minute of the second quarter.

And it took the Colts nearly 59 total minutes to find the end zone before Brissett capped a 19-play, 77 yard drive by hitting tight end Jack Doyle for a 3-yard touchdown with 1:16 left. The Colts went for the win and Brissett faked a handoff to Marlon Mack, then hit a wide-open Doyle for the 2-point conversion. The play was negated by an offensive pass interference penalty against receiver Kamar Aiken.

That led to the Colts scrambling to settle for a 43-yard point-after attempt into the wind. Indianapolis used its final timeout for players to clear a spot for Adam Vinatieri. The NFL’s oldest layer hit a 43-yard wobbler that hooked in from the right and just sneaked over the crossbar.

Vinatieri, however, missed a field-goal wide left from the exact same spot with 1 second remaining after the Colts regained possession when Matthias Farley intercepted Webb’s pass over the middle with 52 seconds left.

The 97 combined rushing attempts were the most in an NFL game since the Chiefs and Bears combined for 100 attempts in Week 10 of the 1981 season.

The Colts ran the ball 17 straight times before Brissett attempted his first pass, a short completion to Marlon Mack, who turned it into an 11-yard gain with 6:13 left in the second quarter.

The Colts didn’t attempt a pass in the first quarter, becoming the first NFL team to do so since the Panthers against Tampa Bay in Week 5 of last season. The last time the Colts failed to attempt a pass in one quarter was in a 27-13 win against Tennessee on Dec. 18, 2011.

That victory was their first of the season to end a 0-13 start.