Colts lose to Texans in overtime 37-34 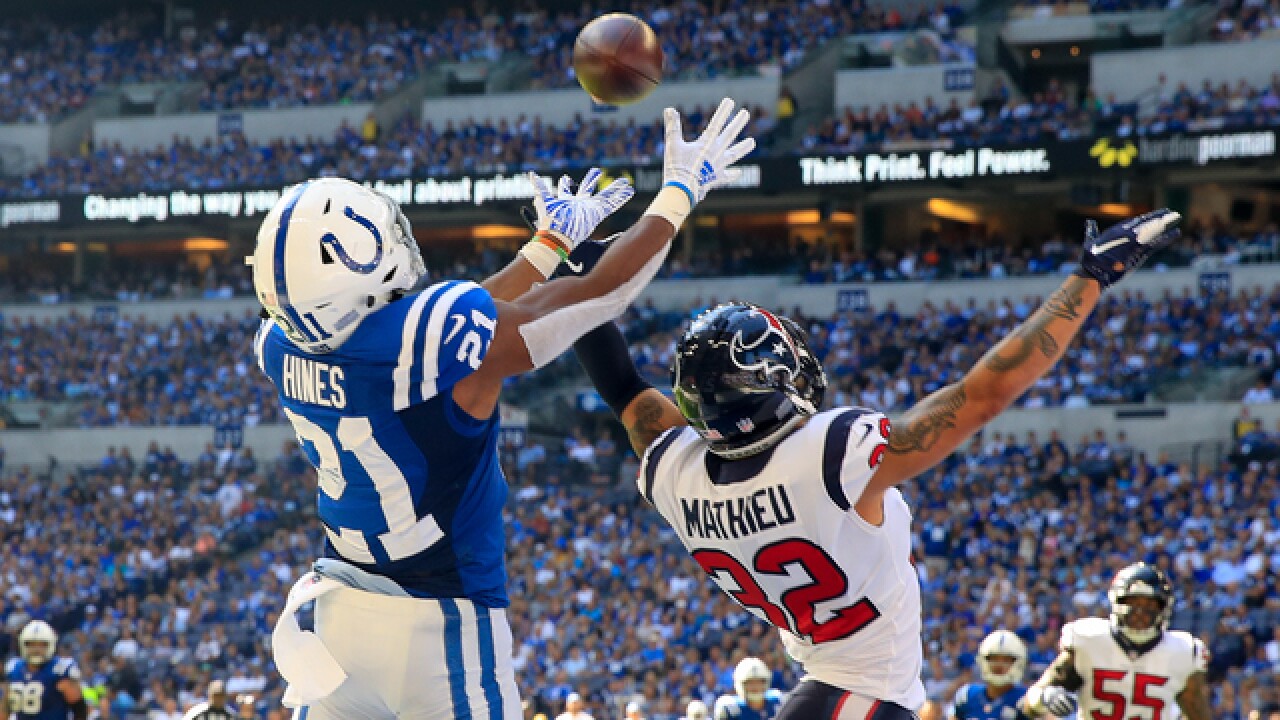 Image copyright 2018 Getty Images. All rights reserved. This material may not be published, broadcast, rewritten, or redistributed.
Andy Lyons
<p>INDIANAPOLIS, IN - SEPTEMBER 30: Nyheim Hines #21 of the Indianapolis Colts catches the ball in the 3rd quarter against the Houston Texans at Lucas Oil Stadium on September 30, 2018 in Indianapolis, Indiana. (Photo by Andy Lyons/Getty Images)</p>

INDIANAPOLIS (AP) — Ka’imi Fairbairn took advantage of his second chance on a 37-yard field goal attempt Sunday, making it as time expired in overtime to give the Houston Texans a 37-34 victory over the Indianapolis Colts.

He had missed the first kick wide left — just after Indy called timeout. Houston (1-3) ended the league’s losing streak at nine games with its first victory since Nov. 19.

The Colts threw an incomplete pass on fourth-and-four from their own 43, giving the ball back to Houston with 24 seconds to go. Deshaun Watson then connected with DeAndre Hopkins on a 24-yard pass to set up the winning kick.

It’s the third time in four weeks Indy (1-3) has come up short in the closing minutes. The loss spoiled Adam Vinatieri’s record-breaking day.

The 45-year-old kicker became the league’s career leader in field goals when he made a 42-yarder with 2 seconds left in the first half and he extended the mark to 567 with a 44-yarder to give the Colts a 34-31 lead in overtime.

But Fairbairn tied the score with a 29-yard kick and won it with the 37-yarder.

Vinatieri moved past Hall of Famer Morten Andersen, who had 565 career field goals.

Watson, who missed the final nine games last season with a torn anterior cruciate ligament in his right knee, looked like his old self. He was 29 of 42 with 375 yards, two touchdown passes and one interception. He also rushed six times for 41 yards and his first rushing score of the season.

Luck nearly matched the franchise’s regular-season record with a 21-point comeback. But his final pass hit the ground.

He was 40 of 62 for a career-high 464 yards with four touchdowns and no interceptions. He tied the single-game franchise record for completions and broke the mark for attempts.

The Texans tied it on Jadeveon Clowney’s recovery of a botched snap in the end zone, then took the lead on Watson’s 3-yard TD pass to Will Fuller V. They made it 21-7 when Hopkins caught a 5-yard TD pass.

Vinatieri’s field goal got the Colts within 21-10 at halftime.

The Texans made it 28-10 with Watson’s 5-yard scoring run to open the second half.

But Luck methodically brought Indy back.

Texans: Hopkins started despite dealing with thumb, ankle and hamstring injuries all week. Fuller left with a hamstring injury late in the first half and linebacker Brian Peters did not return after injuring his ankle.

Colts: Hilton left with a chest injury and cornerback Kenny Moore III departed with a concussion in the first half. But Hilton returned then left in the second half with a hamstring injury. Moore did not return.