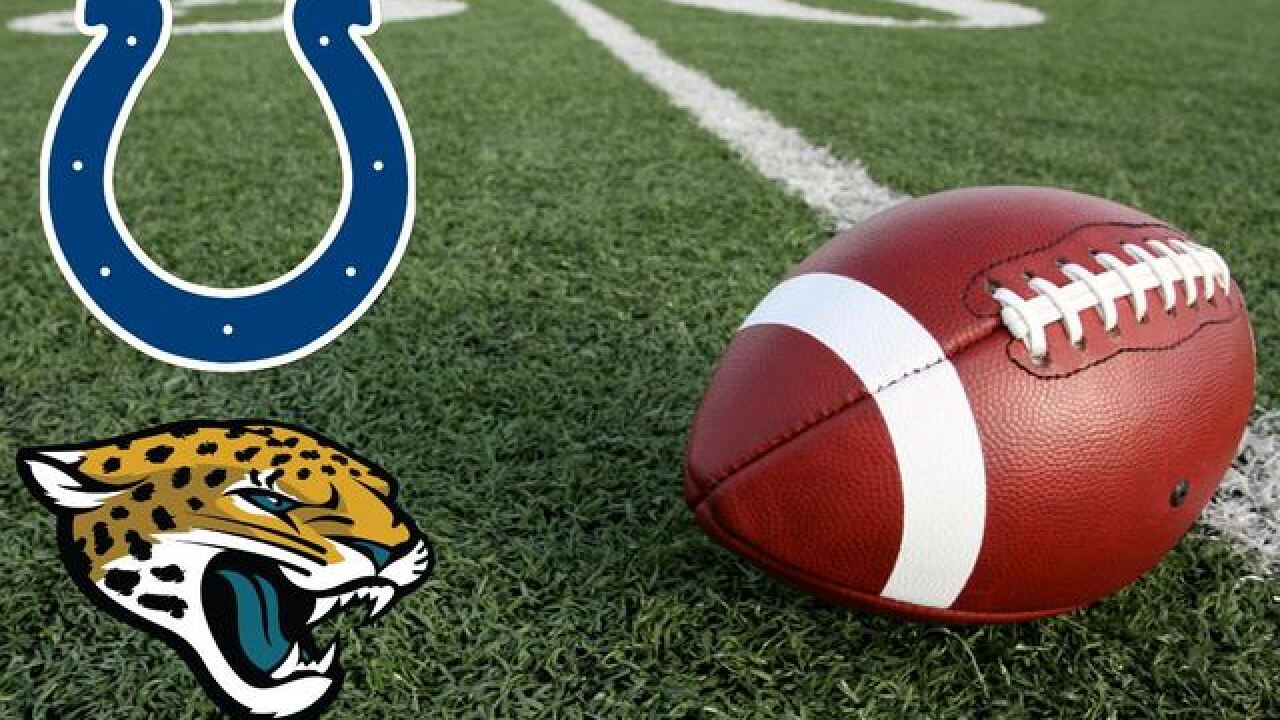 INDIANAPOLIS (AP) -- Blake Bortles threw for a season-high 330 yards and one touchdown, and T.J. Yeldon scored on a 58-yard run, leading the Jacksonville Jaguars past the Indianapolis Colts 27-0 on Sunday.

By ending a four-game losing streak at Lucas Oil Stadium, the Jaguars (4-3) remained atop the AFC South.

Indy (2-5) lost its second straight, both to division foes.

Bortles and the offense looked good on a day when they played without rookie Leonard Fournette, the NFL's second-leading rusher. Fournette was inactive because of a sprained right ankle.

But the Jags' stifling defense dominated again. While Jacksonville didn't add to its league-leading takeaway total, it matched the single-game franchise record for sacks (10), set in the season opener against Houston.

Indy, strangely, was shut out for the first time since a 41-0 loss to the Jets in a playoff game on Jan. 4, 2003. Its only serious scoring chance was snuffed out with a fourth-down stop at the Jaguars 6-yard line.

It was never even close.

Bortles led Jacksonville to scores on their first two possessions -- getting a 1-yard run from Chris Ivory to cap the first and finishing the second with a nifty 5-yard TD pass to Marcedes Lewis -- for a 14-0 lead. He set up new kicker Josh Lambo for two second-quarter field goals to make it 20-0, and Yeldon's 58-yard TD run late in the third quarter sealed it.

Jaguars: Yeldon had nine carries for 122 yards. Jacksonville had 518 yards in total offense compared with 232 for the Colts. Allen Hurns caught five passes for 101 yards.

Colts: Jacoby Brissett was 22 of 37 for 200 yards. Frank Gore carried nine times for 34 yards, moving within four attempts of passing Barry Sanders (3,062) for No. 6 on the NFL's career list. T.Y. Hilton caught two passes for 27 yards after having one catch in Monday night's loss at Tennessee. The 10 sacks are the most in the Colts' Indianapolis era.

Jaguars: Starting center Brandon Linder was inactive with an illness and left tackle Cam Robinson did not return after injuring his left ankle on the second play of the game.

Colts: Indy lost three defensive starters -- cornerback Rashaan Melvin (concussion), inside linebacker John Simon (stinger), safety Malik Hooker (right knee) in the first half. None of the three returned. Starting center Ryan Kelly (hamstring) left in the in the second half and also did not return.

Colts: Will try to snap a two-game losing streak when they visit Cincinnati next weekend.