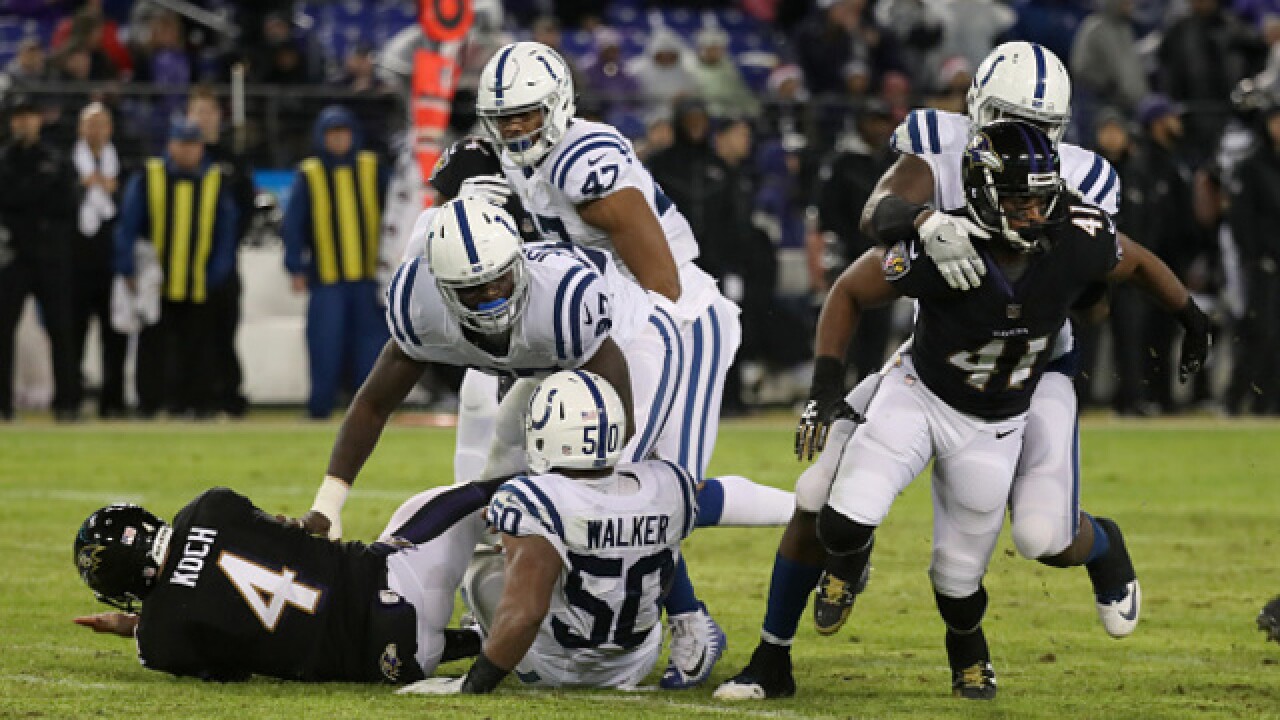 Copyright 2017 Scripps Media, Inc. All rights reserved. This material may not be published, broadcast, rewritten, or redistributed.
Rob Carr
<p>BALTIMORE, MD - DECEMBER 23: Punter Sam Koch #4 of the Baltimore Ravens is knocked down during a blocked punt in the fourth quarter against the Indianapolis Colts at M&T Bank Stadium on December 23, 2017 in Baltimore, Maryland. (Photo by Rob Carr/Getty Images)</p>

BALTIMORE -- The Baltimore Ravens didn’t force a turnover, scored only two touchdowns and were dangerously close to going into overtime at home against lowly Indianapolis.

Though the Ravens’ performance Saturday was not particularly artistic, they perceived the final result to be a thing of beauty: Ravens 23, Colts 16.

Baltimore (9-6) scored on its first two possessions and held off the skidding Colts (3-12) in a windy, rain-soaked second half.

The Ravens will reach the playoffs as an AFC wild card by defeating Cincinnati at home next Sunday. Striving for its first postseason berth since 2014, Baltimore has won five of six following a 4-5 start.

Joe Flacco threw for 237 yards and two touchdowns, Justin Tucker kicked three field goals and the Ravens did just enough to squeeze out a victory.

“I wish we had gotten into the end zone one more time,” Flacco said. “It’s not always pretty.”

Indianapolis closed to 16-13 in the third quarter before Flacco threw a 4-yard touchdown pass to Maxx Williams with 8:40 remaining.

It was 23-16 when Anthony Walker blocked a Ravens punt , giving the Colts the ball at the Baltimore 27 with 2:36 left. Indianapolis moved to the 10 before a third-down sack and a fourth-down incompletion ended the comeback bid.

“We had a great chance to win this game,” Colts quarterback Jacoby Brissett said. “We just didn’t get it done down there.”

Flacco, who went 29 for 38, has thrown for seven TDs with just one interception over his last four games.

The Colts have lost six in a row for the first time since 2011, when they opened 0-13. That was the year before they drafted quarterback Andrew Luck, whose absence this season with a shoulder injury contributed heavily to the team’s slide into the AFC South cellar.

Brissett completed 16 of 33 passes for 215 yards and Frank Gore had 68 yards rushing and a touchdown catch for Indianapolis. More importantly, the Colts did not commit a turnover against a team that leads the NFL with 33 takeaways.

Adam Vinatieri kicked three field goals for the Colts, but he had one blocked and came up short on a 60-yard try at the end of the first half.

After kicking a field goal on its first possession, Baltimore blocked a field goal try by Vinatieri. The Ravens then launched a 71-yard drive that ended with Flacco tossing a 6-yard touchdown pass to Michael Campanaro for a 10-0 lead.

Brissett answered with a 14-yard TD pass to Gore, and Tucker kicked a 39-yard field goal for Baltimore after the two-minute warning.

Tucker connected from 36 yards out to increase the lead to 16-7 with 5 1/2 minutes gone in the third quarter, but Vinatieri kicked a pair for the Colts to make it 16-13.

Baltimore’s Tony Jefferson swatted away a 38-yard FG try in the first quarter, the 13th blocked kick by the Ravens since 2014 and their fifth over the past two seasons. It was the first time the Colts had a FG blocked since Nov. 3, 2013. Vinatieri later came up short on a 60-yard try before connecting from 48 and hitting the right upright on a successful 38-yarder.

Ravens: WR Jeremy Maclin (knee) was on the inactive list. ... CB Jaylen Hill (right knee) left in the third quarter and did not return.

Colts: Wrap up this unpleasant season at home against Houston on New Year’s Eve.

Ravens: Seek their first sweep of Bengals since 2012. Baltimore won the Super Bowl that season.