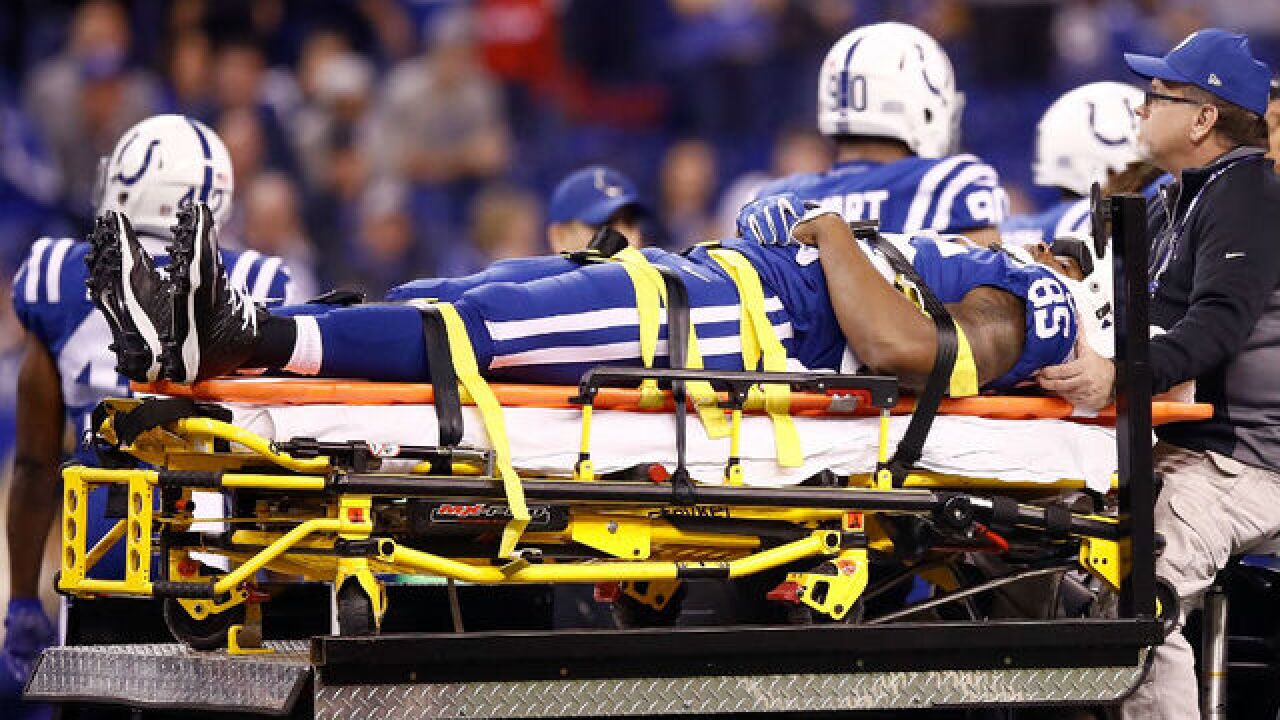 INDIANAPOLIS (AP) -- The Indianapolis Colts have been getting beaten up all season.

On Thursday, they got banged up, too.

The Colts wanted to show a national television audience they were better than their numbers. Instead, Indy went home from its latest loss with a long injury list and a head coach that was relieved about one thing.

"Brandon (Williams), pretty scary moment obviously," Chuck Pagano said after Thursday's 23-15 loss to Denver. "He's back in the training room right now. He's got a concussion. We erred on the side of caution, and rightfully so, taking care of him, to get him taken care of on the field and get him to the hospital."

Williams was released from the hospital just after midnight, the Colts said on Twitter.

TE Brandon Williams is out of the hospital and 'doing well' after suffering a concussion during #DENvsIND: https://t.co/jMLaFnd5Ba pic.twitter.com/orSNNvtFmg

When Williams went down and stayed down 59 seconds into the second quarter, Lucas Oil Stadium went silent. Players dropped to their knees as trainers and doctors cautiously strapped the Colts' No. 2 tight end to a backboard and carefully removed his facemask.

Brandon Williams stretchered off after this.. pic.twitter.com/J0WztYxA6Y

After he was lifted onto a cart, Williams' teammates walked over, offered him support and then watched him carted off.

Shortly after the injury, team officials announced that Williams could move his extremities and that he had suffered a head injury -- not a neck injury.

The image of Williams motionless after what appeared to be a helmet-to-helmet collision with Broncos linebacker Deiontrez Mount was scary.

Williams will now enter the concussion protocol and it's unclear when, or if, he might play again this season.

"Upset. Worried about him. Worried about his family that's watching on TV," tight end Jack Doyle said when asked about his initial reaction. "You think about all those things because Brandon is such a great person, great teammate and great friend. It's just hard to see."

The Williams injury is just the latest chapter in what has been a tough season .

A loss at Jacksonville on Dec. 3 assured Indy of its first losing season since 2011. Sunday's loss at Buffalo made sure the Colts' playoff drought would hit three years. And now, after extending their longest losing streak under Pagano to five, the Colts are assured of posting their first losing record at home in six years.

On Thursday, they scored the first 10 points and managed only one field goal over the final 36 1/2 minutes.

Linebackers Jon Bostic (knee) and Jeremiah George (burner) went down in the second half on almost back-to-back plays and right tackle Denzelle Good also left with a knee injury.

Even the seemingly indestructible 34-year-old Frank Gore, whose 106 consecutive starts are the most of any active running back in the league, left in the first half with a knee injury. He returned in the second half and managed to churn out just enough yards to become the second player in league history to record 1,000 yards from scrimmage in 12 consecutive years.

But it was the Williams injury that turned a disappointed locker room into a somber one.

"It's a scary thing for all of us, and I'm sure it's scary for his family as well," kicker Adam Vinatieri said. "You hate to see anybody go off like that, teammate or the other team obviously. I'm hoping that's it's more of a precautionary thing and I'm hoping that he's going to be OK."