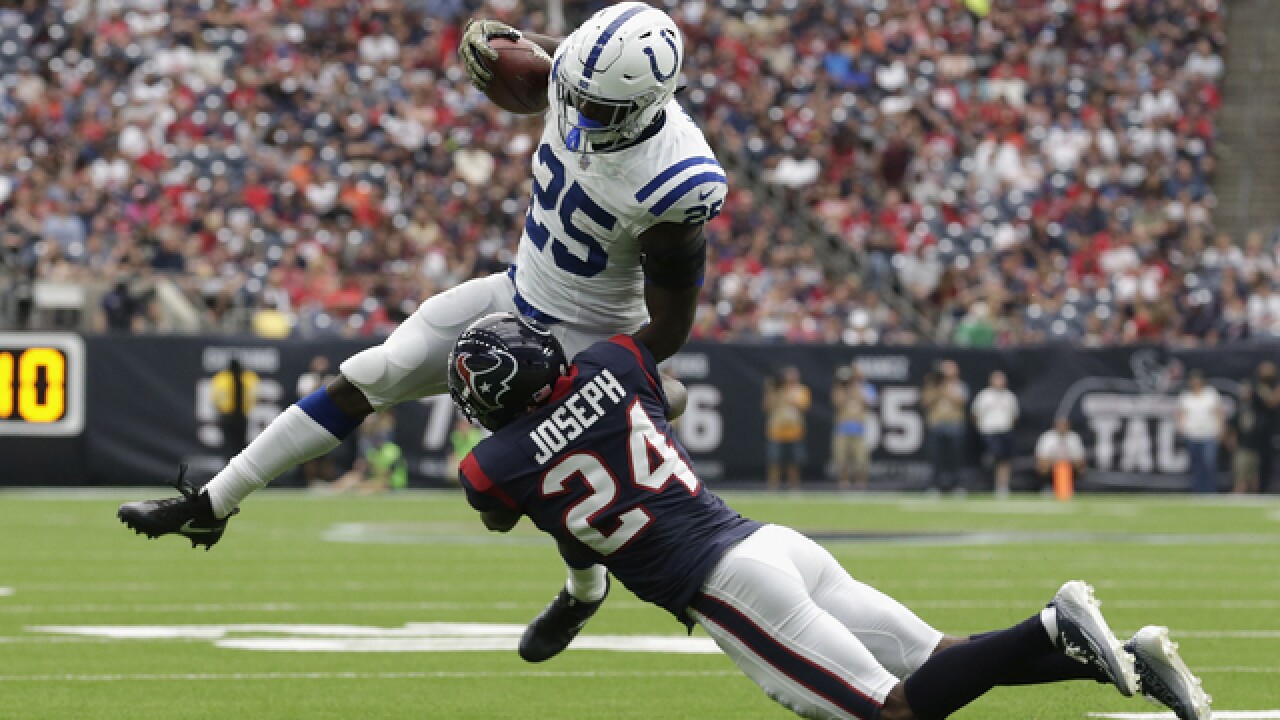 Copyright 2017 Scripps Media, Inc. All rights reserved. This material may not be published, broadcast, rewritten, or redistributed.
Tim Warner
<p>HOUSTON, TX - NOVEMBER 05: Marlon Mack #25 of the Indianapolis Colts is tackled by Johnathan Joseph #24 of the Houston Texans in the third quarter at NRG Stadium on November 5, 2017 in Houston, Texas. (Photo by Tim Warner/Getty Images)</p>

HOUSTON (AP) — In a difficult season, the Indianapolis Colts hope that their 20-14 win over the Houston Texans on Sunday that snapped a three-game skid can propel them to better results in their last seven games.

“Nobody remembers all the other stuff,” receiver T.Y. Hilton said. “November football is different. We wanted to get a win and start off on the right foot.”

Hilton was the main reason the Colts (3-6) avoided losing four straight games for the first time under coach Chuck Pagano. He had 175 yards receiving with two touchdowns as Indianapolis also ended a three-game losing streak to Houston.

Jacoby Brissett threw for 308 yards for his second 300-yard game this season and tied a season high with two touchdown passes. The Colts will look to him to finish out the season after Andrew Luck was placed on injured reserve this week. Brissett, who was traded from New England in early September, has appeared in every game this season and started the past seven with Luck out all season recovering from January shoulder surgery.

He found Hilton much more often on Sunday after the two had failed to connect consistently in the past three games where Hilton had just 61 yards receiving combined.

“We’re just as an offense getting better,” he said. “A lot of the plays that he made today, a lot of people helped create those plays ... we’re progressing as an offense. A lot more players are making plays.”

Some things to know about Indy’s win over the Texans.

MOVING UP: Adam Vinatieri scored eight points on Sunday to move past Gary Anderson for second on the NFL’s career scoring list with 2,442 points. He made field goals of 22 and 53 yards and two extra points. Vinatieri, who will turn 45 next month, needs 103 more points to pass Morten Andersen for first place.

“He’ll go down as the greatest of all time,” Pagano said. “Now, he’s chasing the other Andersen. Future first-ballot Hall of Famer and I’m glad I have a front-row seat.”

He failed to move the ball for much of the game with Houston’s first points on offense not coming until he threw a TD pass to DeAndre Hopkins with about six minutes remaining.

That was the first career touchdown pass for Savage, who made the fourth start of his career on Sunday. He finished 19 of 44 for 219 yards. Savage, who started the opener but was benched at halftime for Watson, had a chance to win it for the Texans on the last play but was sacked and fumbled.

He denied that rust played any part in his performance.

“I don’t know if it was difficult,” he said. “I just didn’t make the throws to win the game.”

NO ANSWERS: Indianapolis cornerback Vontae Davis did not make the trip to Houston for what the team called a non-injury related reason.

Pagano said Davis would be active next week, but refused to provide any details about why he didn’t travel this week. He was asked about it three different ways and each time he would only say: “It’s a coach’s decision.”

CLOWNEY COMING: Houston defensive end Jadeveon Clowney continues to lead the defense with J.J. Watt and Whitney Mercilus out for the season with injuries. The top overall pick in the 2014 draft finished with four tackles, a sack and a quarterback hit on Sunday. He has five sacks this season and 15½ in his career.

He wasn’t interested in talking about his performance since the team lost.

“We didn’t win so we didn’t play too good,” he said. “When we play good we win games ... don’t care about nobody playing good. You’re losing. So we’ve got to get back to work.”