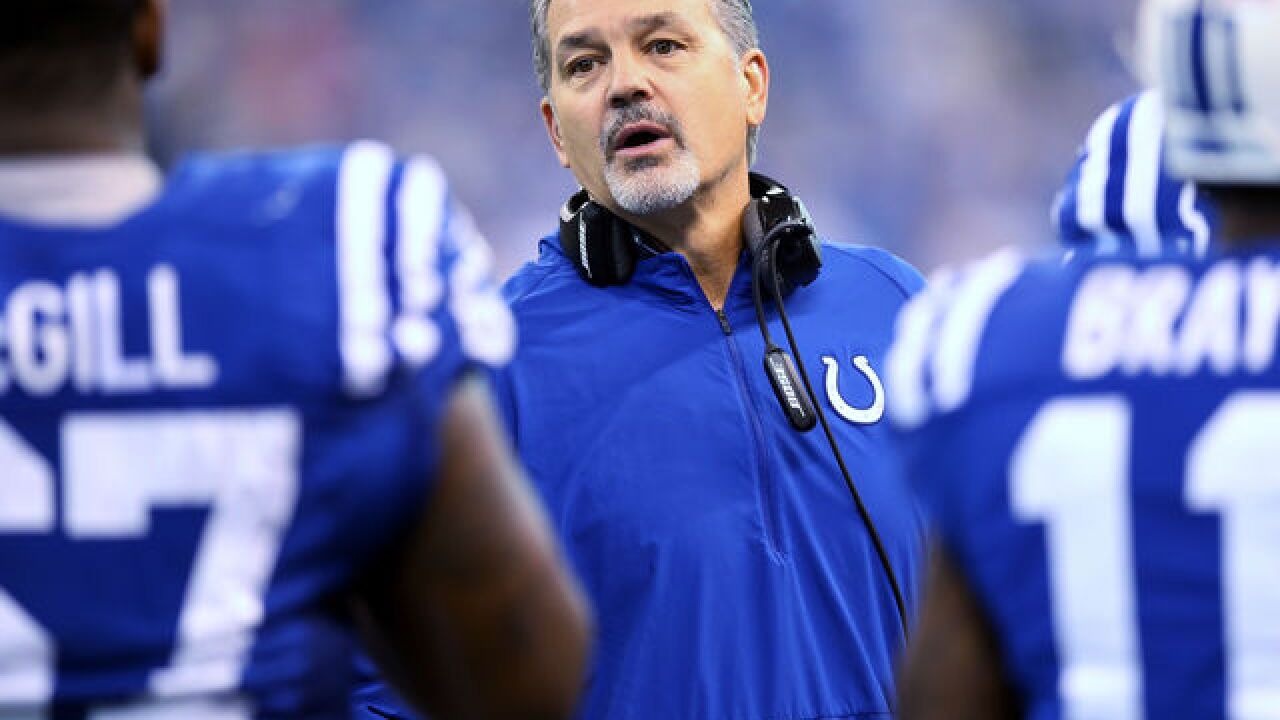 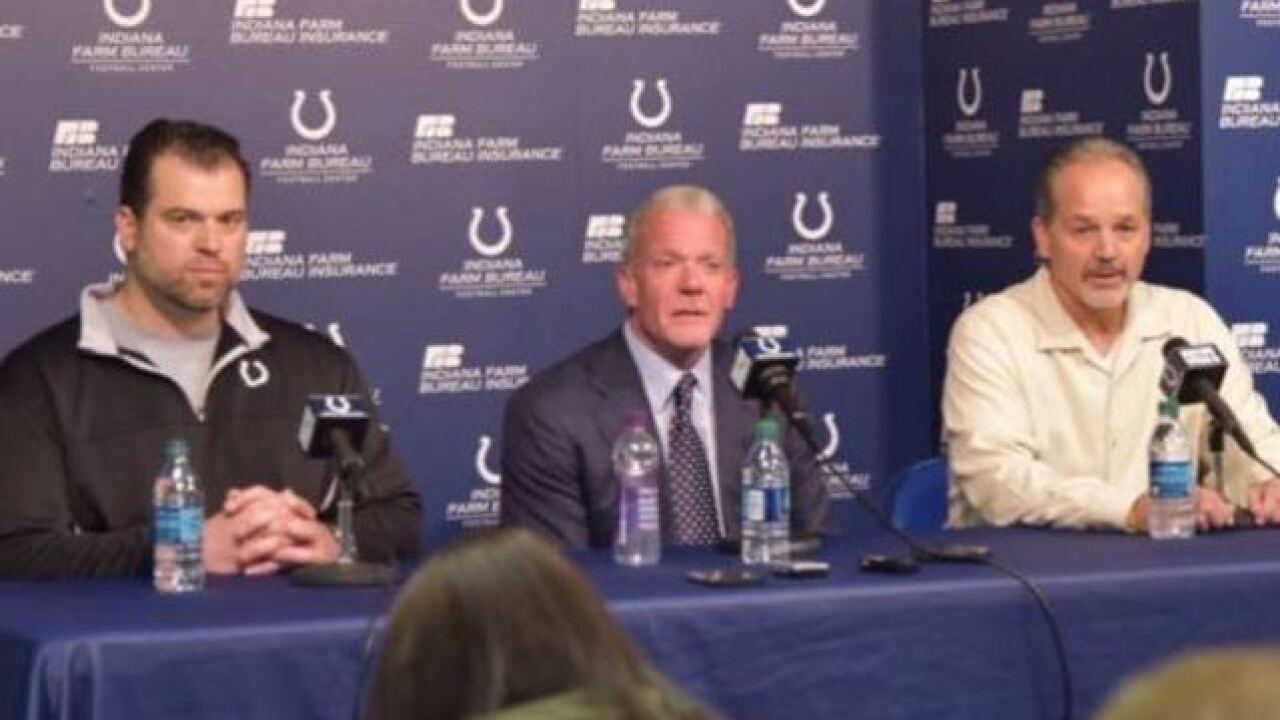 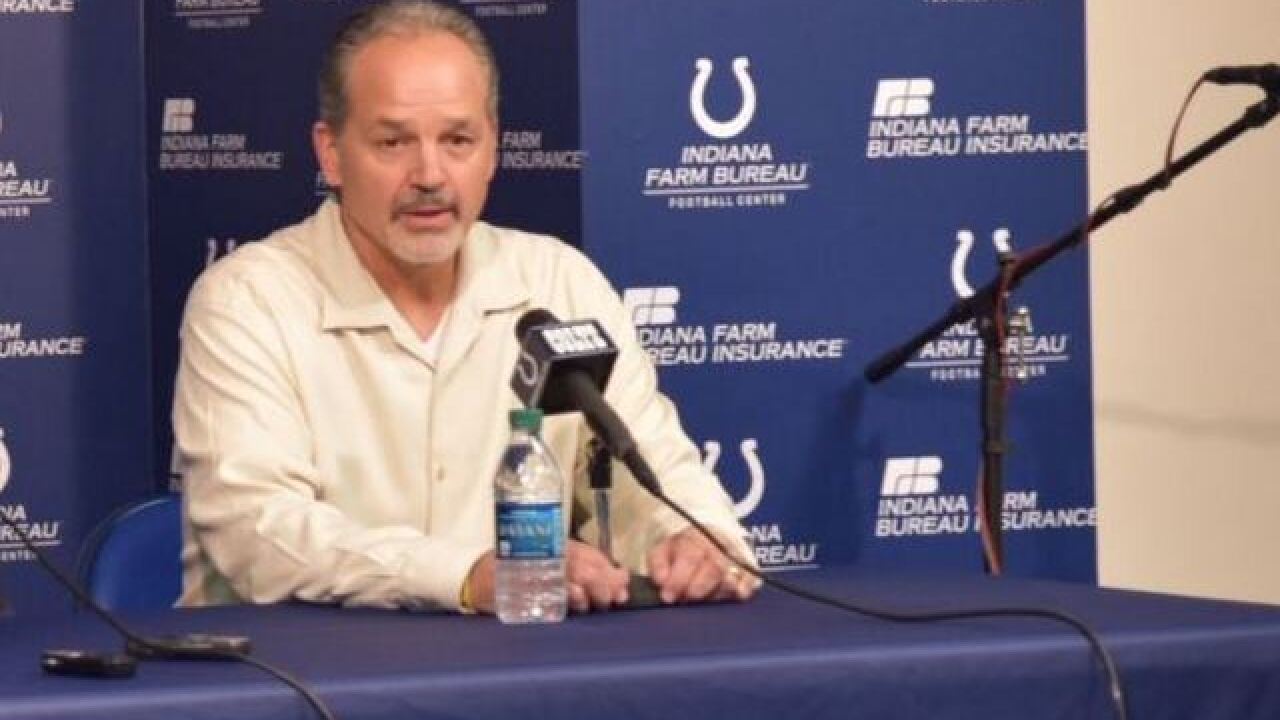 INDIANAPOLIS -- The Indianapolis Colts decided late Monday night to extend Chuck Pagano's contract as the head coach of the team for four years, and Pagano, who dealt with questions about his relationship with the front office and his position's security all year, decided to accept.

The team held a press conference Monday night to officially announce the news.

The decision to keep Pagano in Indianapolis comes as almost every "insider report" offered thoughts to the contrary, with an ESPN report last week citing sources and the "toxic relationship" between Pagano and Grigson that would lead to his firing if the Colts missed the playoffs.

Chuck Pagano by the numbers: Looking at his 4 seasons in Indy

During the announcement press conference, Pagano said he and Grigson "agree to disagree," that it was always water under the bridge, and every meeting "ends with a handshake and a hug," with the same goal in mind: to win a championship. Team owner Jim Irsay also said during the conference that Grigson and Pagano were "contractually tied" with Pagano's extension.

Reading between the lines...Grigson has also received an extension. GM's deal ends the same time as Chuck's new deal. #Colts

As for the reasoning behind the decision, Irsay said it was never about being pressured, but that "careful consideration" was undertaken to give Pagano the extension, citing his preference for continuity.

Irsay: Continuity plays a role, you like continuity when you can have it

Pagano had turned down a contract extension prior to the start of this season, and was rewarded for his 41-23 overall record, making three straight playoff appearances and still managing to stay in this year's playoff hunt until the final day after losing Andrew Luck for nine games.

Irsay compared Pagano and Grigson's first four years with Andrew Luck to Jim Mora and Bill Polian with Peyton Manning, citing that the modern era has had more playoff wins in their first years than the Hall of Fame pair did.

As for Pagano, he always wanted to stay.

"This is absolutely the best day of my life," Pagano said of the extension. "We love this community, we love this football team; words can't describe how I feel right now."

BACKUPS MATTER: The Colts won five games this season with 40-year-old Matt Hasselbeck and this time with Freeman. Amazingly, Hasselbeck and Freeman combined to win three times as many games (six) as Andrew Luck (two). Tennessee backup Zach Mettenberger was 5 of 13 for 38 yards with one interception Sunday and fell to 0-10 as a starter.

RUNNING MEN: With the backup quarterbacks on center stage, both teams tried to get something out of their ground games. Frank Gore finished the season strong, rushing for 161 yards in his final two games - enough to become the 15th player in league history with 12,000 yards but 36 yards short of becoming Indy's first 1,000-yard back since 2007. Cobb, a rookie, rushed 19 times for 73 yards and scored his first pro touchdown.

NEXT YEAR: Colts' 2016 opponents have been set, and it's not a walk in the park, especially with how improved the Jacksonville Jaguars could be with a revamped Blake Bortles at the helm. Their away schedule is particularly grueling.