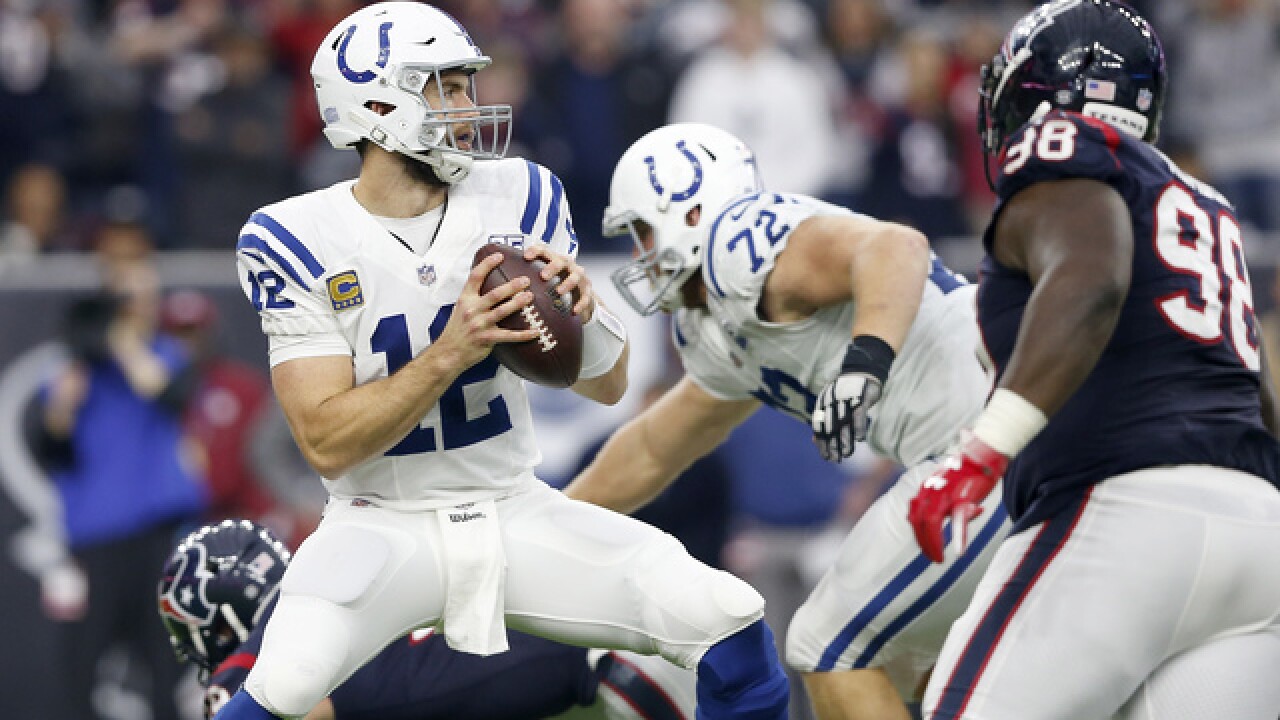 Image copyright 2018 Getty Images. All rights reserved. This material may not be published, broadcast, rewritten, or redistributed.
Tim Warner
<p>HOUSTON, TX - DECEMBER 09: Andrew Luck #12 of the Indianapolis Colts steps up in the pocket to pass under pressure by D.J. Reader #98 of the Houston Texans in the fourth quarter at NRG Stadium on December 9, 2018 in Houston, Texas. (Photo by Tim Warner/Getty Images)</p>

HOUSTON (AP) — Andrew Luck threw for 399 yards and two touchdowns and T.Y. Hilton had 199 receiving yards to lead the Indianapolis Colts to a 24-21 road win over the Houston Texans on Sunday afternoon.

The Colts (7-6) snapped a nine-game winning streak by the Texans (9-4), trimming Houston’s lead over the AFC South to two games with three remaining.

Hilton entered the game as the all-time leader in receiving yards per game at NRG Stadium with 122.3 yards and finished Sunday just shy of 200 yards on nine catches on 12 targets.

Houston cut Indianapolis’ lead to 24-21 with a 7-yard touchdown pass from Deshaun Watson to DeAndre Hopkins with less than three minutes remaining. With the Colts facing a critical third-and-1 at midfield, Luck drew Jadeveon Clowney offside to secure a first down and the win.

The Colts entered Sunday having allowed just 14 sacks, second only to New Orleans. Houston’s usually menacing pass rush was largely neutralized with just two sacks from J.J. Watt and Christian Covington after being held without a sack against Cleveland last week.

Indianapolis’ defense, on the other hand, gave Houston fits both in the passing and running game. The Colts sacked Watson five times for a loss of 41 yards and held Houston’s rushing offense to just 89 yards on 25 carries.

Houston took an early lead after a lengthy 12-play drive set up a 3-yard touchdown run by running back Alfred Blue.

The Colts didn’t have a first down until early in the second quarter. They found momentum on that drive before a pass from Luck was tipped by Kareem Jackson and intercepted by Andre Hal.

The Colts took a 14-7 lead late in the first half on a 14-yard pass from Luck to Eric Ebron. It was Luck’s fourth straight touchdown pass to a tight end, three of which went to Ebron.

Luck had not thrown a touchdown pass to a non-tight end since the Nov. 18 win over Tennessee until the third quarter, when he found receiver Zach Pascal for a 12-yarder to put the Colts up 24-14.

Indianapolis had a 54-yard field goal by Adam Vinatieri as time expired in the second quarter to take a 17-7 halftime lead. During Houston’s winning streak, the team never trailed at halftime.

Houston opened the third quarter with a long drive to a 1-yard touchdown run on a direct snap to Lamar Miller to cut the Colts’ lead to 17-14.

Indianapolis will host the Cowboys and Giants before closing out the season in Tennessee, while Houston visits the Jets and Eagles before hosting Jacksonville in the finale.

Texans receiver and kick returner Deandre Carter left in the first quarter and was later ruled out with a concussion. . Colts right guard Mark Glowinski was carted to the locker room in the second quarter with an ankle injury.

Colts: Host the Cowboys next Sunday.

Texans: Visit the Jets next Saturday.