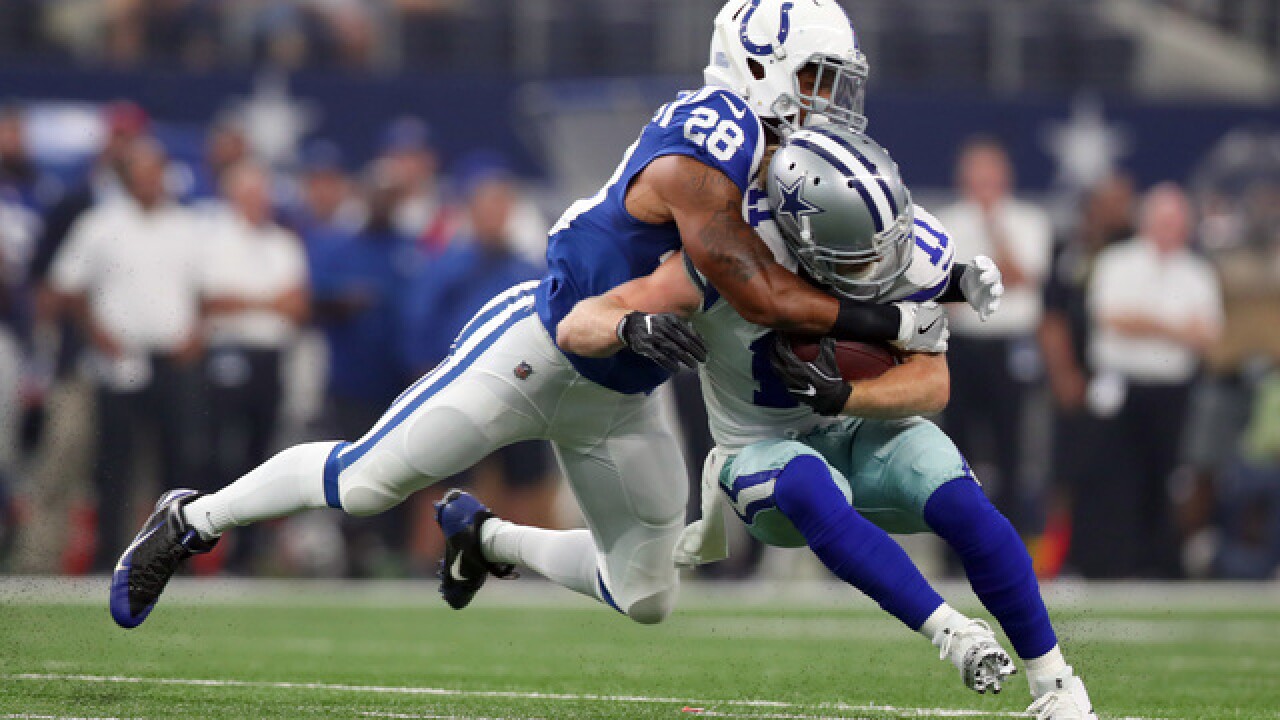 Copyright 2017 Scripps Media, Inc. All rights reserved. This material may not be published, broadcast, rewritten, or redistributed.
Tom Pennington
<p>ARLINGTON, TX - AUGUST 19: Tevin Mitchel #28 of the Indianapolis Colts tackles Cole Beasley #11 of the Dallas Cowboys in the first half of a preseason game at AT&T Stadium on August 19, 2017 in Arlington, Texas. (Photo by Tom Pennington/Getty Images)</p>

Last year's NFL Offensive Rookie of the Year after a sensational season that ultimately led 10-year starter Tony Romo into retirement, Prescott was 8 of 9 for 106 yards in his two possessions. The first was a 95-yard drive in seven plays that started with a 23-yard toss to Bryant.

Prescott's second series ended on a fumble inside Indy's 10 by Darren McFadden, who started as the Cowboys again delayed Elliott's exhibition debut.

Elliott has appealed his suspension while disputing the NFL's findings that he caused bruises on his ex-girlfriend in several confrontations last summer in Ohio.

Owner Jerry Jones said it "wouldn't surprise me at all" if Elliott played next week's preseason home game against Oakland, which would likely be his only action before a suspension.

Bryant's 55 yards receiving held up as the most in the game for the Cowboys.

"I don't know if I can honestly put it into words just how much better of a player he is, and we were just talking about how good his body feels," Prescott said. "He's just a much better player right now than what he was last year at this time. Our chemistry is growing, so it's fun."

Scott Tolzien played the first half for the Colts, who aren't sure if Luck will be ready for the regular season after offseason shoulder surgery.

Indy didn't record a first down until early in the second quarter, and its only touchdown before halftime was Lavar Edwards' 15-yard return of Dallas backup quarterback Kellen Moore's fumble.

"We need to start faster," said Tolzien, the only one of the three current potential backups with NFL experience. "We need to get first downs, which keep the momentum going and get the offensive rhythm going."

Stephen Morris, the third quarterback to play, finally got the Colts an offensive touchdown on an 18-yard throw to Fred Brown with 57 seconds remaining. Morris was 11 of 115 for 111 yards, most of it with Indianapolis down two scores in the fourth quarter.

McFadden looked like a capable fill-in for Elliott with 59 yards on nine carries, but was stripped by Matthias Farley on his final run late in the first quarter. Alfred Morris, who also figures to see action during Elliott's suspension, had nine carries for 49 yards. Rod Smith, who has had a strong camp, had 53 yards on seven carries.

FINALLY ON THE FIELD

Dallas linebacker Jaylon Smith, Rod Smith's younger brother, made his preseason debut in his first game since a devastating knee injury in his final college game with Notre Dame at the Fiesta Bowl two seasons ago. The Cowboys drafted him in the second round last year.

His only tackle on a short pass forced the second straight three-and-out to start the game for the Colts. "From Day One, I've believed in myself, and I thank all the supporters everywhere, even everyone who doubted me," said Smith, who played 12 snaps.

NO REST FOR 40-SOMETHINGS

While the Cowboys didn't use Dan Bailey again after a 25-yard field goal in the first half, the 44-year-old Vinatieri kept kicking after halftime, adding a 42-yarder. Of course, he's trying to get used to a new snapper and holder going into his 22nd season.

Colts: Marlon Mack, a fourth-round pick out of South Florida, led the team with 45 yards rushing on five carries.

Cowboys: Rush, undrafted out of Central Michigan, had his third straight solid preseason outing with second-half TD tosses to another pair of rookies in Noah Brown and Lance Lenoir.