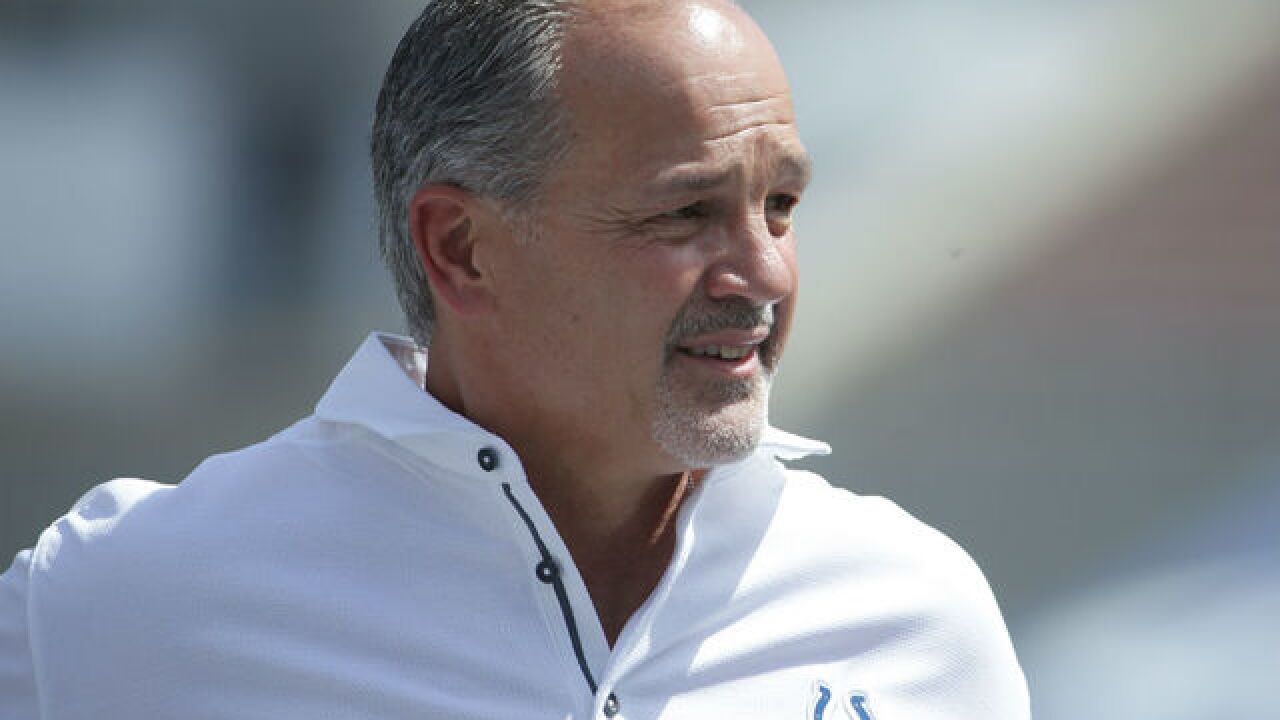 Exactly what, if anything, will look different Sunday against Arizona remains a mystery.

But Pagano's coy play is all part of a broader strategy, designed to keep the Cardinals guessing as the reeling Colts try to gain a competitive advantage.

"A little bit of everything," Pagano said succinctly Wednesday when asked about possible specific moves.

Of course, not every debate is being shrouded in secrecy.

Pagano made a surprising admission Monday by announcing he's contemplating a quarterback change after the Los Angeles Rams returned both of Scott Tolzien's interceptions for touchdowns in a 46-9 season-opening loss. Receiver Donte Moncrief broke up another potential interception return for a score when he grabbed the defensive player's face mask.

After one week, Tolzien had the second-worst rating (33.8) of any starting quarterback in the league.

With him, the Colts (0-1) couldn't move the ball consistently, couldn't protect the quarterback (four sacks) and went a league-worst 0 for 10 on third downs. Only one other team, San Francisco (two), failed to convert at least three third-down chances in Week 1.

The former New England Patriot replaced Tolzien for the final three series and led the Colts to their only touchdown. He also recovered a fumble in his own end zone for a safety, though many have already forgotten about that play.

So as Andrew Luck continues recovering from offseason shoulder surgery, Pagano must make a tough call: Stick with the winless veteran or try the newcomer who's still learning the playbook and putting names and faces together in the locker room?

Brissett and Tolzien both said Wednesday they have not been told who will start against the Cardinals (0-1).

Pagano didn't drop any hints, either, implying he's likely to keep the choice under wraps until kickoff.

One certainty: Whoever starts will be playing behind a different offensive line.

Right tackle Denzelle Good went on injured reserve Wednesday with an damaged ligament in his wrist. Pagano did not provide a timetable for Good's return.

If the Colts follow the depth chart, second-year lineman Le'Raven Clark would make his fourth career start. But Clark failed to win the job in training camp.

Other options include using backup lineman Joe Haeg, who started eight games at right tackle as a rookie in 2016, or moving left guard Jeremy Vujnovich to tackle, where he played some during the preseason. The problem is Vujnovich also is dealing with an ankle injury.

"We're down some numbers, but we're fortunate these guys have played multiple spots," Pagano said.

What other changes could be in the works?

With Good going on injured reserve, the Colts re-signed veteran linebacker Sean Spence as they try to generate a pass rush that seemed almost nonexistent against the Rams.

"I think the run defense was a bright spot, holding a back like (Todd) Gurley to 40 yards or whatever," defensive tackle Henry Anderson said. "But as a front, we've got to do a better job putting pressure on the quarterback."

"Both guys will get reps just like they did last week. We'll work both guys in," Pagano said, creating confusion about how he'd split up the snaps at practice this week. "You have to be (confused) right now. Bear with me. You understand why."