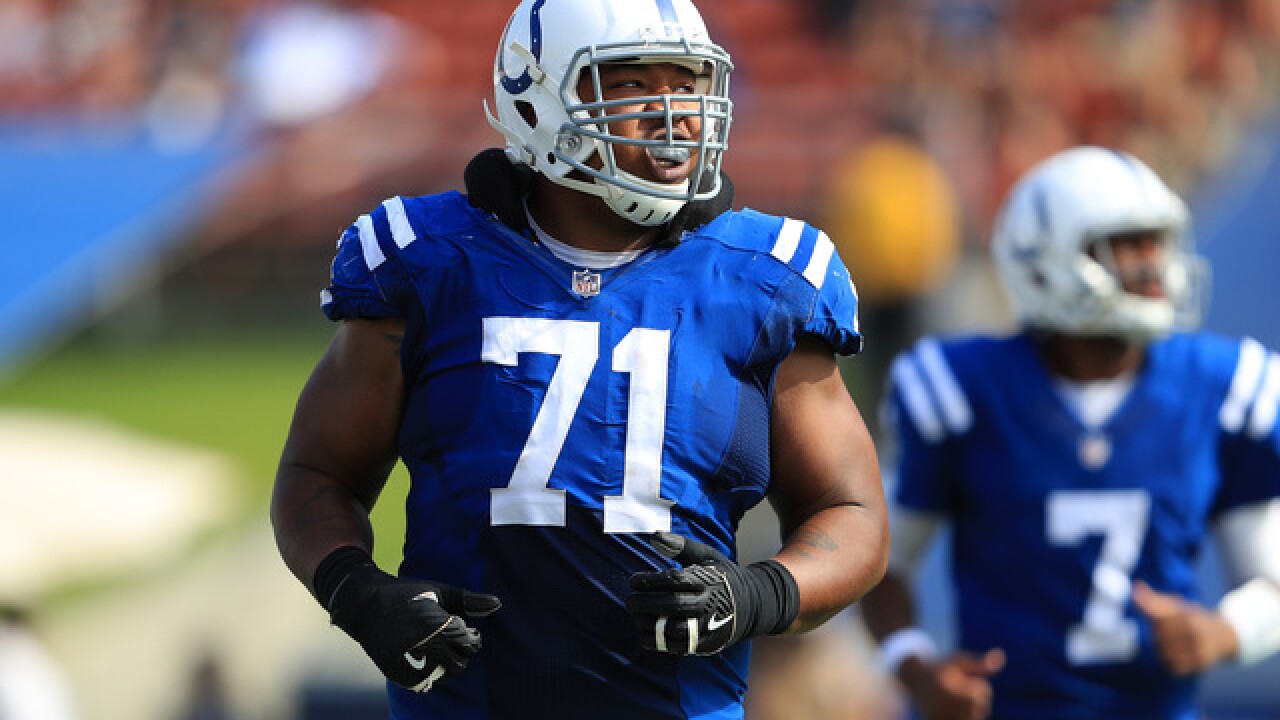 Copyright 2018 Scripps Media, Inc. All rights reserved. This material may not be published, broadcast, rewritten, or redistributed.
Sean M. Haffey
<p>LOS ANGELES, CA - SEPTEMBER 10: Denzelle Good #71 of the Indianapolis Colts runs off the field during the first half of a game against the Los Angeles Rams at Los Angeles Memorial Coliseum on September 10, 2017 in Los Angeles, California. (Photo by Sean M. Haffey/Getty Images)</p>

One day after incumbent Denzelle Good left the third preseason game with a knee injury, coach Frank Reich said that Good would not play in Thursday's preseason finale at Cincinnati and could miss several additional games.

Good is listed week to week, meaning the Colts must find another starter before the Sept. 9 season opener against Cincinnati.

"We are going to take one more week to evaluate that," Reich said on a conference call Sunday. "(General manager) Chris (Ballard) and his staff are working on it. Coaching staff, we have talked a lot about it. Chris and I have had a lot of discussions on it. We will figure out what's best for the team. We are going to use these last couple of days, and last (preseason) game to zero in on that."

It's the only spot along the revamped offensive line without a clear front-runner.

Longtime left tackle Anthony Castonzo expects to reclaim the spot when he returns from a hamstring injury, which has kept him out for most of training camp. The Colts hope he'll be back for Week 1.

Center Ryan Kelly has played well after returning from an injury-filled second season. The 2016 first-round draft pick missed the first part of last year after having foot surgery and finished the season on injured reserve with complications from a concussion.

Rookie Quenton Nelson was plugged into the left guard slot after being selected No. 6 overall in this year's draft, and Ballard signed free agent Matt Slauson to start at right guard.

But with quarterback Andrew Luck finally back from surgery on his right shoulder, one spot remains unsettled -- and Good's injury could make the choice more difficult.

Good started last season on injured reserve with a torn ligament in his wrist, but returned in time to start five of Indy's last six games.

He entered training camp with the inside track to keep the job -- by fending off challenges from second-round pick Braden Smith and veterans Joe Haeg, Austin Howard, J'Marcus Webb and Le'Raven Clark, who started Saturday's game at right tackle.

Now, with Good at least temporarily out of the mix, the Colts will take as much time as they need to pick a starter.

"I feel confident with the guys that we have competing for that position, but we will take all the time allotted to us to make that decision," Reich said. "No one panics, you get guys ready to play and you go in with confidence with the guys you got."

Good wasn't the only one hurting after Saturday's victory over the San Francisco 49ers.

Starting defensive end John Simon left the game with a neck injury, but is now listed day to day. Reich said Simon was pulled as a precautionary measure because he also finished last season on injured reserve after hurting his neck, and he could return in time for the season opener.

Backup safety T.J. Green, who has been fighting to keep a spot on the 53-man active roster, has been listed week to week after hurting his hamstring.

Indy also traded former starting inside linebacker Antonio Morrison to Green Bay for cornerback Lenzy Pipkins -- a move intended to shore up a secondary that was already missing second-year cornerbacks Quincy Wilson and Nate Hairston because of injuries.

But Reich and Ballard are still trying to sort out backup spots at receiver, tight end, in the secondary and even along the offensive line.

And they won't be rushed.

"There are some good battles left at all these positions and we will use the whole body of work to determine that. But certainly last impressions always help," Reich said. "Everybody has their three or four things like this they are dealing with. It's more par for the course, status quo. This is normal order of business."