Great 1st half spirals into blowout loss for Colts 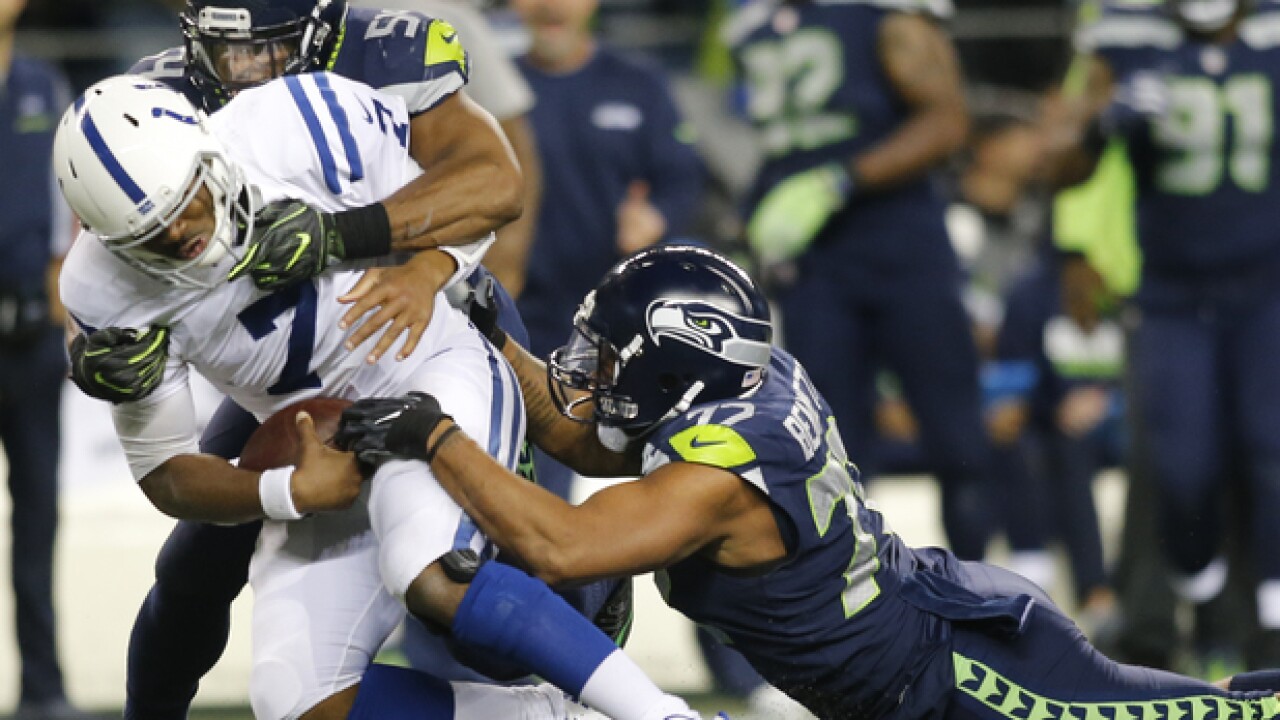 Copyright 2017 Scripps Media, Inc. All rights reserved. This material may not be published, broadcast, rewritten, or redistributed.
Jonathan Ferrey
<p>SEATTLE, WA - OCTOBER 01: Middle linebacker Bobby Wagner #54 of the Seattle Seahawks and defensive end Michael Bennett #72 bring down Jacoby Brissett #7 of the Indianapolis Colts in the fourth quarter of the game at CenturyLink Field on October 1, 2017 in Seattle, Washington. (Photo by Jonathan Ferrey/Getty Images)</p>

SEATTLE (AP) -- Jacoby Brissett and the rest of the Indianapolis Colts played well enough in the first half to hear the home team being booed off the field at halftime.

Those boos didn't last long. It took just a short series of plays in the second half by the Seattle Seahawks to see a potential stunning win for the Colts spiral into a blowout loss.

Tied at 18 late in the third quarter, the Seahawks went on a 28-0 scoring blitz to roll to a 46-18 win over the Colts on Sunday night. After 2 1/2 quarters of staying with one of the elite teams in the NFC, the Colts were run over by the Seahawks in the closing minutes.

"They just outplayed us big time in the second half," Colts coach Chuck Pagano said. "We didn't do a good job of adjusting. That's on me. We're a lot better than that, but it's going to be the same old song and dance if we don't get things cleaned up and if we don't find a way to quit shooting ourselves in the foot, and put a complete game together."

Indianapolis did nearly everything right in the first half. The Colts controlled possession. They kept the Seahawks offense from finding any rhythm. And they did enough on offense to hold a 15-10 lead at the break thanks in part to Brissett's 18-yard touchdown pass to Donte Moncrief in the final minute of the half.

The only mistake of the first half was Brissett underthrowing a pass that Justin Coleman undercut and returned 28 yards for a touchdown.

Brissett's fumble that Bobby Wagner returned for a touchdown to give Seattle a 32-18 lead will get most of the attention. Making his third start since being acquired by the Colts, Brissett was 16 of 29 passing for 157 yards.

"When you go into the locker room at halftime you make adjustments. They made a lot of good adjustments -- that's a good football team, so hats off to them," Indianapolis cornerback Rashaan Melvin said. "But, we've got to get back into the lab fix up the mistakes we made. Like I said, we've got to put four quarters together."